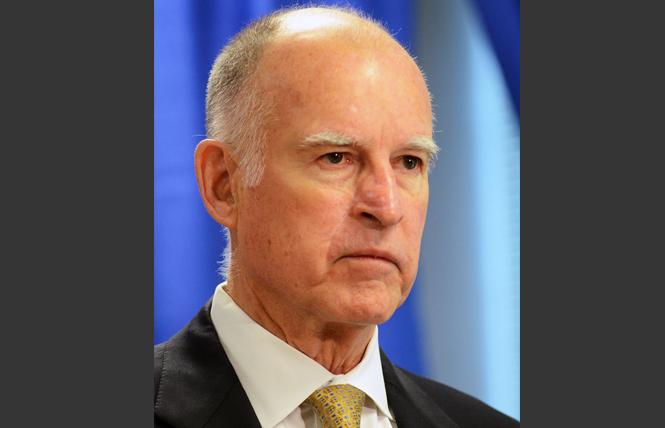 To the consternation of LGBT advocates and education groups, Brown struck down Assembly Bill 2153, authored by Assemblyman Tony Thurmond (D-Richmond), which would have funded annual training sessions for educators in the state on how to support LGBTQ students in grades seven through 12 and address issues they face in school like bullying and harassment.

In a veto message issued Sunday, September 30, Brown noted that he had signed into law in 2015 AB 827, which required the state Department of Education to assess whether local schools are providing their certificated staff working in middle and high schools information about the resources available for LGBTQ students.

"Current law also requires the department to monitor local schools to ensure the adoptions of policies prohibiting discrimination, harassment, intimidation, and bullying on the basis of sexual orientation, gender, gender identity, or gender expression," wrote Brown. "If local schools find that more training or resources on this topic is needed, they have the flexibility to use their resources as they see best."

In a statement to the Bay Area Reporter, Atkins said she remains committed to ensuring the needs of LGBTQ students in California are addressed.

"Bullying, harassment, and suicide among our LGBTQ youth remains a major problem, which tells me more training and support are needed in our schools. As Senate leader, I will continue to back any efforts to make public schools in California safe and supportive for all students," stated Atkins.

In a message emailed to Our Family Coalition members, Executive Director Renata Moreira said the advocacy group for LGBT families was "deeply disappointed" by Brown's decision to veto the bill. She added that the legislation, which had wide support within the state's education community, "will be submitted again in the next legislative season, and we'll be once again advocating for its passage and full implementation."

But LGBT advocates are not waiting for the bill to be enacted as law. Our Family Coalition has been ramping up the trainings it provides to school educators and, this week, took part in a statewide convening about the issue hosted by the Sacramento County Office of Education.

And next week the nonprofit is hosting a forum in San Francisco that will focus on "what a statewide, accredited LGBTQ-inclusive professional learning program for teachers and administrators should look like," wrote Moreira.

Her agency, she added, has "been doing this work for years. And now we're kicking it up a notch: we're working with major forces in the state's education and LGBTQ history fields to brainstorm how to scale up the teacher training."

According to Equality California, the statewide LGBT advocacy group, there is evidence showing the need for state lawmakers to enact Thurmond's bill. Based on the responses to EQCA's Safe and Supportive Schools Survey from more than 130 school districts across the state, "far too few are providing adequate training to ensure teachers and school staff have the tools they need to provide LGBTQ students with safe and supportive learning environments," reported the group, which is expected to issue a full report on the school survey results in January.

In a statement EQCA Executive Director Rick Zbur said, "While we respect and appreciate Governor Brown's desire to give schools 'flexibility,' the status quo is failing California's LGBTQ students and denying too many a shot at success."
Zbur added that EQCA, which sponsored Thurmond's legislation, "look(s) forward to passing it again next year."

Brown also vetoed this year AB 1247 by Assemblyman Adrin Nazarian (D-North Hollywood), which would have required at least one hour of LGBT cultural competency training prior to the licensure of professional fiduciaries and an additional hour of LGBTQ continuing education every three years.

In his veto message Brown wrote, "While I understand and support cultural competence, I do not believe the mandated continuing education requirements of this bill are warranted."

The bills bring to five LGBT pieces of legislation tracked by EQCA that Brown has vetoed since returning to the governorship in 2011. Twice he axed a bill, mostly recently in 2013, requiring various state agencies to collect LGBT demographic data before signing it into law in 2015.

Brown, who is termed out of office this year, also refused to sign a 2011 law that would have required LGBT cultural competency training for health care workers. A budget hawk, Brown's opposition to the bills was rooted in their estimated costs to the state.

Two other bills that EQCA supported this year failed to make it out of the Legislature and should be reintroduced. One was the Dignity and Opportunity Act authored by gay state Senator Scott Wiener (D-San Francisco), which would have required that transgender inmates in California jails be referred to by their preferred pronouns, gender, and name.

As the B.A.R.'s online Political Notes column reported last month, Wiener's bill was killed in the Assembly Appropriations Committee due to its estimated cost in the millions of dollars.

In late August gay Assemblyman Evan Low (D-Campbell) spiked his bill that would have banned "conversion therapy" for adults due to concerns voiced by religious leaders that they would be targeted under it for counseling their parishioners struggling with their sexual orientation. Low promised to work with faith leaders and LGBT advocates on redrafting the bill.