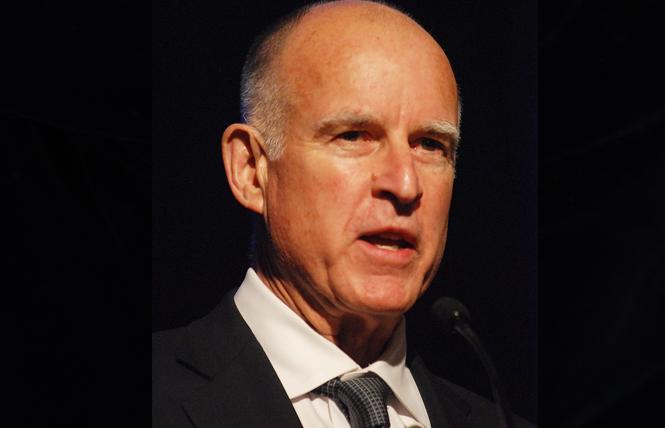 Despite issuing rare vetoes of LGBT bills this session, Governor Jerry Brown cemented his legacy as the most pro-LGBT governor in the country's history by signing into law 12 pieces of legislation that directly benefit LGBT Californians.

"With the signing of this bill, we tell our foster youth that no matter who you are or how you identify, there is a place for you in California," stated Gloria. "We want our future generations to know they have a safe place to grow up and live. At its core, that's what this bill does — we empower transgender and gender non-conforming foster youth to live authentically despite their circumstances."

Senate Bill 918, the Homeless Youth Act of 2018 co-authored by gay state Senator Scott Wiener (D-San Francisco) and Assemblywoman Blanca Rubio (D-Baldwin Park), provides resources for housing, services and supports for youth experiencing homelessness and tasks the state's Homeless Coordinating and Financing Council with overseeing the program. It follows state lawmakers this year budgeting $25 million toward assisting the more than 15,000 homeless youth under the age of 25 living in California, many of which identify as LGBTQ.

"It's unacceptable that so many youth are living on our streets," stated Wiener. "We have a moral responsibility to help these kids get into housing, get stable, and get onto a positive path in life. Yet, two-thirds of our counties don't even have youth-specific homeless programs, and the state itself isn't doing enough. SB 918 is a first step toward ensuring California doesn't let these kids fall through the cracks."

Another bill seen as helping LGBTQ homeless youth is AB 2490, authored by Assemblyman David Chiu (D-San Francisco). It eliminates the fees charged to people experiencing homelessness seeking to obtain certified birth certificates directly from the state rather than having to return to the county of their birth.

Despite nixing a bill that would have funded training for teachers on how to assist LGBTQ students, Brown did sign Chiu's AB 2291 requiring the California Department of Education to establish guidelines to prevent bullying and disseminate online training modules to local educators.

"California teachers are on the front lines of protecting our students from bullying and cyberbullying, but we need to equip them with the training and tools to do so," stated Rick Zbur, executive director of the statewide LGBT advocacy group Equality California, which co-sponsored the dozen LGBT-related bills signed by Brown.

AB 2639, co-authored by Assemblymen Marc Berman (D-Palo Alto) and Patrick O'Donnell (D-Long Beach), requires the state's schools to review their suicide prevention policies at least every five years and to update them if necessary.

According to the group Out to Protect, it is the first state law to provide LGBTQ awareness training for law enforcement officers and 9-1-1 dispatchers. It takes effect January 1, like most of the legislation.

"Although I had an amazing law enforcement career, I stayed closeted until 2004. Although things are better today, homophobia is still pervasive in the profession," said Greg Miraglia, a gay former police officer at three different Bay Area departments who helped draft the bill and has trained others in the profession for 32 years.

Also signed by Brown in June was Assemblyman Phil Ting's (D-San Francisco) AB 1985 requiring local law enforcement agencies to update and strengthen their policies on hate crimes, including those committed against LGBT individuals. He had first introduced it last year but pulled it due to concerns about its cost; a review this year found it would have minimal fiscal impacts.

In August Brown signed AB 2719, authored by Assemblywoman Jacqui Irwin (D-Thousand Oaks), which adds sexual orientation, gender identity, and gender expression to the definition of elderly communities to be given priority consideration for programs and services administered through the California Department of Aging.

"Lesbian, gay, bisexual, transgender, and queer Californians will now have certainty that the state will continue to take into account their unique circumstances as they age," stated Irwin, "and our current elderly LGBTQ population will continue to benefit from having priority in the planning and implementation of programs they need to age with dignity."

AB 2663, by Assemblywoman Laura Friedman (D-Glendale), provides retroactive relief to individuals who were registered as domestic partners in municipal jurisdictions and may have had their property taxes increased due to the death of a partner. The bill ensures that locally registered domestic partners who may not have registered with the state during a certain time period can continue to afford their homes.

Brown's signing of the dozen bills this year adds to his legacy as the most LGBT-friendly governor in the state's, and country's, history. During his current two terms in office, Brown has signed into law at least 72 bills that specifically protected the rights of, or improved the health of, the LGBT community in the Golden State. And over the last seven years, Brown has vetoed just eight LGBT-related bills.

The tally is based on the B.A.R.'s coverage since 2011, the start of Brown's third gubernatorial term, and the legislative scorecards annually compiled by Equality California, the statewide LGBT advocacy organization. In addition to five bills sponsored by EQCA that Brown has vetoed [see story, page 1], he also declined to sign in 2013 two bills that were aimed at tracking LGBT health disparities via medical forms.

And in 2014 Brown nixed a bill mandating equal access to baby changing stations in public restrooms, which would have benefited both gay dads and transgender parents.

Web Extra: For more queer political news, be sure to check http://www.ebar.com Monday mornings for Political Notes, the notebook's online companion. This week's column reported on major endorsements of a trio of out SF school board candidates.