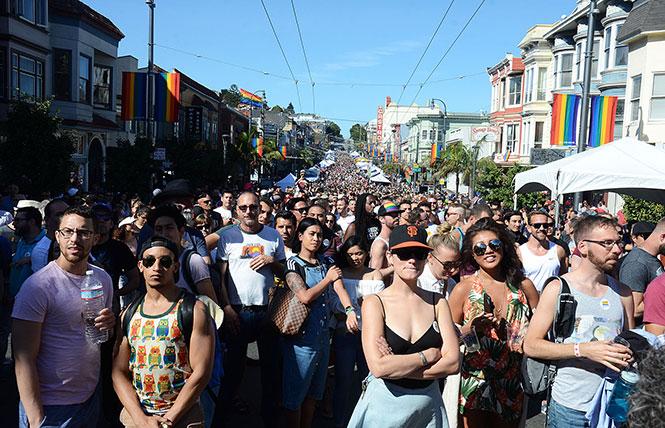 San Francisco leaders early next year are expected to adopt the LGBTQ+ Cultural Heritage Strategy, which would preserve important LGBT sites throughout the city, including the Castro, which holds the annual Castro Street Fair every fall. Photo: Rick Gerharter

San Francisco is set to become the first U.S. city to adopt a strategy for protecting and enhancing its LGBT cultural heritage.

City leaders early next year are expected to adopt the LGBTQ+ Cultural Heritage Strategy. It aims not only to preserve important LGBT sites throughout the city but also to empower San Francisco's LGBTQ residents through economic programs and social services.

While San Francisco has adopted similar strategies centered on specific locations to protect various communities' ethnic heritage, this marks the first such document to be focused on a minority community citywide.

"It is really, to my knowledge, one of the most ambitious projects of this type that has been attempted anywhere in the world," said GLBT Historical Society Executive Director Terry Beswick, a member of the working group for the plan. "What is significant about it, it is an effort, a collaborative effort, between the public and private sectors to really look at the full, big picture of LGBTQ culture and heritage within the context of the larger society."

If enacted, as its drafters expect it will be, the plan will provide a roadmap for how the city and private entities can atone for the societal and institutional discrimination heaped upon the LGBT community going back decades, Beswick told the Bay Area Reporter in an interview about the strategy.

"I really look at this as an opportunity for us to have some sense of reparation for the LGBTQ community because, while we made some huge advances and we've fought some amazing battles over the last several decades, it has really been a fight," said Beswick, a gay man who used to be an assistant editor at the B.A.R.

A draft version of the strategy was met with unanimous praise when it was presented for the first time to the city's Historic Preservation Commission September 19. The oversight body will vote on a final version of the plan in the coming months before it goes to the Board of Supervisors for final adoption in early 2019.

"It makes me proud to live in a city that did it and did it first. I hope it gets copied by other communities," said Commissioner Kate Black, because there "could be a kid out there like my cousin's grandchild who took her life because she was transitioning and didn't feel supported. I hope there is a kid out there who moves to San Francisco and starts a business because of something like this."

Added Commissioner Diane Matsuda, "I know it took a lot of work to get this far. I think it is great."

Advisory group needed
The working group tasked with figuring out how to preserve the city's LGBTQ cultural heritage has been meeting since January 2017 to devise a plan for achieving that goal. As the B.A.R. has previously reported, its formation came in response to community concerns about the shuttering of LGBT bars, businesses, and entertainment venues throughout the city.

It dovetailed with separate initiatives to form LGBT cultural districts in the predominantly gay Castro district; the South of Market area, the historic home to the leather community; and the Tenderloin, long a haven for the transgender community. City preservation officials and LGBT history advocates have also been working to landmark various LGBT historic sites throughout the city and create public spaces that honor the local LGBT community's history.

The strategy brings all of those separate projects under a cohesive plan divided into three focus areas: well-being, culture, and opportunity.

The culture category calls on the city to support the creation of the three LGBT cultural districts and the GLBT Historical Society's plans to open a larger museum than the one it operates now in the Castro. The plan also recommends that a LGBTQ+ Historic Preservation Advisory Group be formed to advise the planning department on various initiatives that fall under its purview.

Such a body would provide a way for community members to "be proactive in preserving LGBTQ historic places and sites rather than be reactive," said Shayne E. Watson, a lesbian and architectural historian who co-chaired the working group's arts and culture committee and co-wrote a city document that detailed San Francisco's LGBT history. "I am confident it would be a major first step."

Watson is also the founding chair of the GLBT Historical Society's historic places working group, formed two years ago to push for the landmarking and preservation of important LGBT sites around the city. The nonprofit archival group, under the strategy, would take a lead community role in working with various historic preservation groups and city agencies on protecting LGBTQ historic resources and safeguarding the city's LGBTQ cultural heritage.

Under the strategy's well-being category, the San Francisco LGBT Community Center would be tasked with creating a navigation tool for LGBT services, sort of a one-stop-shop database that residents could utilize. It also recommends there be LGBTQ cultural competency training for public and private organizations.

The draft plan also calls for the development of LGBTQ focused heritage and arts programming and more affordable housing and?workspace options for LGBTQ artists in the city.

In terms of opportunity, the draft plan calls for expanding job training and recruitment programs for LGBT people and increased support for LGBTQ-owned businesses. It also calls for the building of affordable housing for LGBTQ people.

The strategy "is considered a working document," explained planning staffer Frances McMillan, and as such, it can be updated overtime as projects are completed and new initiatives are proposed.

Expanding trans office
Another key recommendation in the plan, as the B.A.R. noted in an online story earlier this month, is to expand the Mayor's Office of Transgender Initiatives into more of an LGBTQ affairs office. Santa Clara County in 2015 was the first in the Golden State to establish such an office, and San Francisco, which is both a city and county, would be the second county in the state to do so.

Clair Farley, the current mayoral adviser on transgender initiatives, supports seeing her office's purview be expanded as long as the concerns of the transgender community remain one of its key focuses. Farley's office would be tasked under the plan with hosting a summit to promote and track the progress of the LGBTQ cultural strategy.

"We are really excited to continue to support and enrich our communities here locally," Farley said at last week's hearing. "We believe working in allyship with city departments and community partners is really important."

Funding would be sought in the Fiscal Year 2019-2020 budget for upward of five additional staffers for the expanded LGBTQ office. The exact funding request to implement the LGBTQ cultural strategy has yet to be finalized.

"All of this is super vital today, given the landscape that is facing our community at the national level," said Roberto Ordeñana, a gay man who is the LGBT center's deputy executive director. "The current political climate has given rise to anti-LGBT rhetoric."

For updates about the city's LGBT cultural strategy, visit its website at http://sf-planning.org/LGBTQStrategy