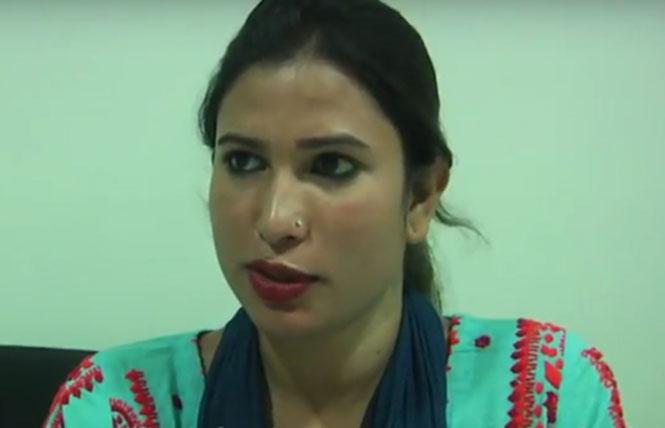 Transgender Bangladeshi activists saw the fruits of their labor pay off last week when the South Asian country's government appointed its first-ever transgender person to a national position.

Chaity joined the commission in July as a part of the organization's plan to accommodate marginalized groups of society, reported the newspaper.

She told reporters that the commission "has been working for hijras, different communities, and minorities for a long time" and the human rights watchdog specifically requested resumes of transgender individuals for the position. Hijras is the term given to trans people in South Asia.

"This step was taken as part of NHRC's commitment to promote and protect human rights," Chairman Kazi Reazul Hoque told the Tribune. "Chaity is now a front desk executive at NHRC. We believe our initiative will encourage other institutions — both governmental and non-governmental — to promote the rights of vulnerable members of society."

The commission also hired two individuals with disabilities in July as a part of its diversity initiative, he added.

Chaity beat out one other candidate for the position.

"I am excited," she told the Tribune. "It is a new beginning for the entire transgender community."

Chaity worked for community organizations on transgender and other issues prior to taking on her new role at the commission.

"If [a] new transgender generation were given work opportunities, I am sure they will not be a part of the so-called hijra culture," she said. "We want [the] opportunity to work for both public and private sectors so that we can resolve our issues ourselves."

Her goal is to improve the lives of transgender Bangladeshis.

"I want to fight for those who want to get a better life and be a part of the mainstream society," she said. "Hijras should lead lives as normal people, and the attitude and mindset of society has to change in order to ensure that hijras do not have to do what they are forced to do for money."

The Bay Area Reporter attempted to contact Chaity for comment, but did not receive a response by press time.

Born and raised in Rajbari, a central region in Bangladesh, Chaity told reporters that she began to realize she wanted to be a girl when she was 5 years old. By the time she was 12 years old, she began to transition, against her family's wishes.

"I fought my family strongly, which was not easy," she said. "In the beginning, everybody used to mock me or tried to take me to the doctors forcefully. It was demoralizing."

"I describe myself as a transwoman, but traditionally we are called hijra, but hijra is a culture not an identity," she said. "I wanted a normal life."

Chaity returned home, where she continued to be ridiculed by her family, she said. However, she used the time to get an education and to search for like-minded people who shared a similar vision, she told reporters.

She earned a higher secondary certificate and started working at the Bandhu Social Welfare Society in Dhaka in 2007.

In 2009, after dropping out of college due to issues surrounding her transition, she quit her job to attend Bangladesh Open University and continued working at various community organizations. She is currently in her final year of college.

Her family is coming to accept her, especially now since she's fulfilling her "male" responsibilities by sending money home to take care of her family, she said.

Joya Sikder, founder of New Bridge of Relationships, a Bangladeshi transgender organization, had a similar experience as Chaity.

Sikder is educated. She has had an 18-year career in the nonprofit sector before founding New Bridge of Relationships based in Dhaka, Bangladesh's capital. She, too, hasn't associated herself with traditional hijras.

Sikder's mother almost immediately accepted her and, from an early point in her transition, helped her choose her first saris. However, it wasn't until the past five years that her father came to accept her and has expressed pride in his daughter's strength, she said.

Other family members have come to accept her, but others still don't, she added.

Sikder has also observed a slow acceptance of her friends by their own relatives. They are now invited to social gatherings, but they still have to dress according to the gender they were assigned at birth, not how they now identify, she said.

To her that's progress.

"It's step-by-step progress because they are no longer ostracized from their family. They are allowed to come to social [events]," Sikder told the Bay Area Reporter through her interpreter, Balark Mallik, at the National Queer Asian Pacific Islander Alliance Conference in San Francisco in July.

"Acceptance doesn't come at once, but it does eventually come," she added.

A survey by the social welfare ministry estimates there are about 10,000 hijras living in the country, reported the Tribune. Hijras also include intersex people.

Chaity's appointment is a positive development since the brutal murders of prominent LGBT rights activists Xulhaz Mannan and Mahbub Rabbi Tonoy in 2016. The murders, along with killings of other activists, prompted a mass exit of LGBTs from the Muslim-majority South Asian country.

Chaity's new role puts the country back on track with integrating its transgender citizens into society as it started to five years ago. In 2013, Bangladesh became one of the first countries in the world to legally recognize a third gender, that included initiatives to create employment and other opportunities.

"It's a very small number of people who do a lot of damage," Chaity said, calling the terrorists' social media tactics "psychological warfare" that they play "on people to silence them."

Despite the cyber threats and violence, an increasing number of LGBT activists and community members chose not to flee Bangladesh.

A suspect in the murder of the two prominent LGBT rights activists was arrested a month later, but as of the two-year anniversary of the men's murder April 25, the actual killers had not been arrested.

"The wheels [of justice] move extremely slow. The wheels don't turn in the way that you would hope, but if you don't fight they will not turn at all. So, [the Bangladeshi LGBT community] are advocating for change. It's our country, and we love it," Chaity said.

Transgender, intersex, nonbinary, and other gender-nonconforming communities are lumped together under "transgender" in the country's third gender law, Sikder explained.

Government officials failed to recognize the need to clearly understand and define what transgender is and the differences between other gender variant identities when drafting the legislation. Rather than obtain the insight of activists and experts, officials surveyed hijras who were beggars on the streets, she said.

The definitions have led to major issues for the government implementing employment initiatives for transgender people. Officials accused 14 of 40 job applicants who were accepted for some of the available jobs of faking being transgender. One individual was even accused of defrauding the government, Sikder said.

Like many transgender individuals, Sikder said that she hasn't been able to claim her formal education since she transitioned.

The lack of being able to access educational records and other important documents under a different name and gender inhibits transgender Bangladeshis' progress, she said.

Despite complications with the law, Sikder said she was happy it exists as there aren't many laws protecting LGBT Bangladeshi people.

Legal tango
LGBT Bangladeshi activists are creative when it comes to the law. They are arguing to extend the current anti-discrimination law in place for Hindus to protect LGBT people and other minorities, Sikder told the B.A.R.

The law is currently on the docket heading to the Bangladeshi Supreme Court.

The activists are also working legislatively, though, strategically working through the judicial system has been more fruitful. Activists have allies in the judicial system they are able to tap into, including closeted LGBT professionals who support their efforts in a variety of ways, she said.

"There are a lot of people who help them in the background," said Sikder, who also works to advance LGBT rights in Bangladesh.

"I'm a trans activist, but my voice is in the LGBT community," she said.