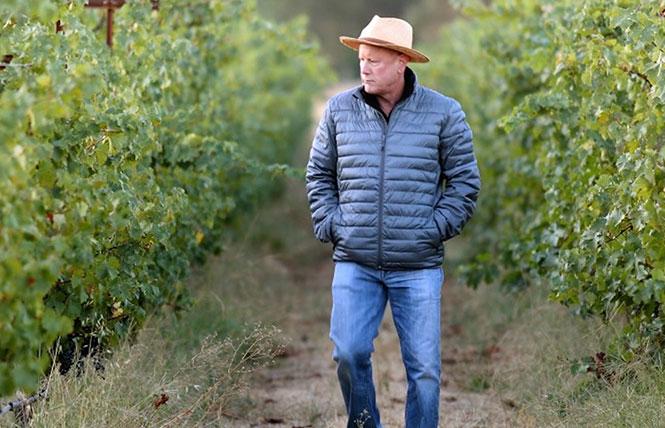 Sipping wine, enjoying good food, and tasting olive oil is the epitome of California's wine country, but Sonoma County also offers something else for visitors: an urban experience.

The first image embedded in many travelers' minds about the viticultural region is one of leisurely dining with spectacular views of rolling hills of vineyards, usually paired with sipping a glass of wine.

The area draws more than 7 million visitors every year, according to the Sonoma County Economic Development Board.

Ask any Sonoma resident why they love the area and they immediately begin to tell you about the beauty, weather, the wine and food, and the openness of the people in one of the Golden State's famed wine regions.

"It is because of the beauty," Chris Morano, a gay man who is the front desk office manager and the chief concierge at the Sandman Hotel (http://www.sandmansantarosa.com) in Santa Rosa, told me as we sat at the pool bar.

"The beauty, the charm, and the wine and the food are the qualities that bring all people here, including LGBTQs," Morano said, adding that Sonoma has "such a welcoming atmosphere."

Mark Lyon, the gay owner of Eco Terreno Wines (http://www.ecoterreno.com), knows all about the wine country's beauty and accepting attitude toward the LGBT community.

Several decades ago, Lyon, then a young winemaker at Sebastiani Vineyards and Winery (http://www.sebastiani.com), came out during an interview with the San Francisco Chronicle.

Even back in 1979, when Lyon first moved to the county fresh from UC Davis, he knew Sonoma was accepting and welcoming.

Shad Reinstein is one of the organizers of Outwatch (www.outwatchfilmfest.org), Sonoma County's LGBT film festival, and also volunteers for a Sonoma County LGBT history project.

Sonoma has been attracting and welcoming LGBT people since at least the late 1960s, Reinstein said, and at one point had an estimated 60 lesbian-owned businesses.

Decades later, there are many LGBT winemakers and a handful of queer-owned wineries, as well as LGBT wine and culinary events and other businesses.

In 2016, Lyon retired from Sebastiani after more than 30 years to create his own environmentally sustainable biodynamic premium wines.

Out in the Vineyard (http://www.outinthevineyard.com) co-founder Gary Saperstein, marketing professional Manuel R. Merjil, and I enjoyed tasting Lyon's first wine certified as biodynamic, a cabernet sauvignon paired with our food selections from El Dorado Kitchen (www.eldoradosonoma.com/kitchen) as he spoke about the wines and the vineyard.

"You wake up, see these beautiful hills, [the] Alexander Valley [is] really scenic and beautiful. The climate is just ideal; very few places on the planet that have as good a climate as this place," said Lyon.

Mark Berry, who owns Olive Queen (http://www.olivequeen.com) with his husband, Rob Akins, said the "olive trees are really pretty when the wind blows, and the leaves start blowing."

"It's just a little silver wave out there. It's really pretty," he said, as I tasted samples of their artisanal olive oil made from a blend of Spanish varietals of Arbequina and Arbosana olives that surround their property.

The products aren't certified organic, but they follow the principles, Berry said.

Social justice vintage
Today, wineries are being created to support LGBT rights and some established wineries are stepping up their support.

A year ago this month, Equality Vines (https://equalityvines.com) opened its tasting room at the main entrance to Guerneville, easily visible to visitors as they drive into town.

The winery, co-founded by Matt Grove, a straight ally, and Jim Obergefell, 52, a gay man who was the lead plaintiff in the 2016 U.S. Supreme Court same-sex marriage case, Obergefell v. Hodges, partners with Sonoma's best winemakers to create its movement-themed wines to raise money for LGBT, immigrant, and women's rights.

"He and I had the vision for making great wines and giving back to what we call 'pillars of equality,'" said Grove, who was inspired to start Equality Vines by his late feminist aunt.

The winery donates an average portion of 20 percent or more of its profits to a variety of causes, raising $18,000 in cash and in-kind donations this year alone, and $60,000 since its launch, Grove said.

Obergefell's favorite is the Love Wins Cuvee, by winemaker Joy Sterling of Iron Horse, but he's currently been enjoying the Stonewall Zinfandel, he said.

Gary Farrell Vineyard and Winery (http://www.garyfarrellwinery.com) is another one that donates to LGBT causes and participates regularly in community events, said Theresa Heredia, the lesbian Latina winemaker who crafts the vineyard's wines.

She said the winery supports LGBT organizations, including the Washington, D.C.-based Human Rights Campaign (http://www.hrc.org) and New York-based OutAlliance (http://www.gayalliance.org), and participates at events such as Sonoma County Pride (http://www.sonomacountypride.org).

Urban heart
Parts of Sonoma County have been changing during the past decade as an increasing number of queer urbanites have decamped from major metropolitan cities for wine country and more LGBT visitors flock to the vineyards.

Unable to quite shake the urbanite out of themselves as they embraced the slower pace of life, they've created new venues, particularly nightlife, to create a sense of city life that they had become accustomed to.

Today, visitors can mingle with locals at a luxury casino and resort, at a comedy club, or head out to hip cafes and bars that stay open at least until midnight.

Lesbian entrepreneur Crista Luedtke has helped lead the way. She owns Boon Hotel and Spa (https://boonhotels.com), Boon Eat and Drink (http://eatatboon.com), and El Bario (www.elbarriobar.com). The Guerneville Bank Club (www.guernevillebankclub.com) and Johnson's Beach (www.johnsonsbeach.com) are other businesses that have opened in recent years.

Luedtke formerly co-owned of Big Bottom Market (www.bigbottommarket.com) with Michael Volpatt, who bought out her stake in the business in early 2017, he told the Bay Area Reporter.

Together, these business owners' efforts have brought a San Francisco vibe to the gay resort town that until a decade ago had suffered due to a drop off in LGBT travelers and a blow by the great recession.

However, the changes haven't come without growing pains. This year, moviegoers have been able to get a peek inside Luedtke's struggles and successes in the documentary, "Empire on Main Street" (http://www.empireonmainstreet.com), which has be doing the film festival circuit, including the famed Cannes Film Festival in France.

Luedtke isn't alone in being criticized for the changes she's brought to Sonoma County. Gay American Indian Greg Sarris, 66, who is tribal chairman of the Federated Indians of Graton Rancheria, owners of Graton Resort and Casino (http://www.gratonresortcasino.com), also was publicly ridiculed during the process of building the resort and casino in Rohnert Park.

Today, Guerneville is thriving again. Five years later, Graton is profitable and is a major contributor to many organizations in the city and county. It donated $1 million to relief efforts after last year's catastrophic North Bay wildfires. The resort and casino also host Sonoma Gaydar (http://www.meetup.com/Santa-Rosa-GayDar-Social-Group), Latino, and other community gatherings.

"I'm so glad," Sarris said, "that I lived through all of this because it did sound a little corny — a casino is going to be about social justice and environmental stewardship." 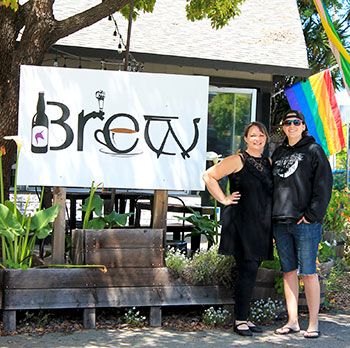 Brew hosts a "RuPaul's Drag Race" night and has teamed up with the local LGBT business group the Letter People (http://letterpeople.io/) to host monthly gatherings in its hip space on the outskirts of downtown Santa Rosa.

"We've been really proud to be an LGBT space in Santa Rosa," said Alisse Cottle, 39, a bisexual woman who co-owns the coffee and beer shop with her fiancée, Jessica Borrayo, a 30-year-old lesbian.

"It's really important for Carlee and me to make this a destination for gays and lesbians all over the world come to when they're in wine country," Pidge said.

The club also hosts several LGBT-themed events, and this month starts at its new location at the Flamingo Conference Resort and Spa (http://www.flamingoresort.com).

Sebastopol is another charming queer haven, filled with LGBT businesses on its main street, including cafes, a cookie shop, boutiques, and entertainment venues.

Festival organizers are proud that they were able to support LGBT fire victims last year when they turned the festival into a benefit.

Where to sleep
During my Sonoma rural and urban adventures, I had the pleasure of staying at a variety of resorts and hotels from ultra-luxury to retro hip.

All of the hotels provided quick access to the vineyards and things I wanted to see and do.

In Rohnert Park, my girlfriend and I stayed and played at Graton as its guests. The resort and casino pulled out all the stops to bring a 21st century experience that fits right into wine country. The gaming floor is centered around the Sky Bar, and the resort offers the highest quality services from dining to the spa.

In Santa Rosa, I went retro as a guest of the Sandman Hotel, a mid-20th century Palm Springs-esque hotel right off of Highway 101, and the Astro Motel (https://theastro.com), which is located in an emerging new arts district in the heart of Santa Rosa.

In Forestville, I checked out the Olive Queen's luxury vacation rental. The one-bedroom loft was well appointed with everything travelers would expect in a luxury hotel room, including a collection of original artworks and a deck overlooking the pool and olive tree grove. It's secluded and close to Guerneville and Sebastopol.

Where to eat
It's hard to make a wrong dining decision in Sonoma. There are many excellent restaurants for breakfast, lunch, and dinner.

I like to start my day off with coffee and breakfast. I tend to beeline for the Spinster Sisters (http://thespinstersisters.com), but during this trip I was introduced to Brew, which I'm very glad to have discovered.

During the day, I stopped in for a sandwich at the Big Bottom Market in Guerneville one day. On another day driving through Sebastopol, I discovered the Barlow (https://thebarlow.net), a unique shopping and dining center, and tasted wine at Friedeman Wines (http://www.friedemanwines.com).

I ate well for dinner, dining at the Pullman Kitchen (http://www.thepullmankitchensr.com) in Santa Rosa, Boon Eat and Drink in Guerneville, Girl and the Fig (http://www.thegirlandthefig.com) and El Dorado Kitchen's (www.eldoradosonoma.com/kitchen) garden patios in Sonoma, and enjoyed an ultra-luxurious meal at 630 Park Steakhouse (https://www.gratonresortcasino.com/Dining/Casual-Dining/630-Park-Steakhouse) at Graton in Rohnert Park.

Getting to Sonoma
Sonoma is about two hours, depending on whether you are leaving from San Jose, San Francisco, or Oakland.

From San Jose and San Francisco, Highway 101 will take you across the Golden Gate Bridge and to the vineyards. Travelers from Oakland and the greater East Bay can take Highway 580 to the Richmond Bridge, then take Highway 101 north.

Public transportation is also available via the new Smart Train (https://sonomamarintrain.org), as well as busses (http://www.goldengate.org) and ferries (https://sanfranciscobayferry.com) that connect to the Smart Train and/or travel throughout the region.

Updated 9/28/18: This article has been updated to correct Chris Morano's surname and the owner of Big Bottom Market.