News Briefs: Women's Building is in the running for $150K 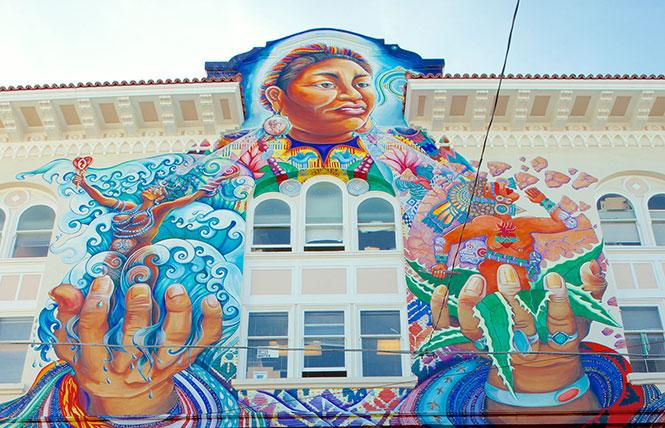 The San Francisco Women's Building has announced it is a participant in the 2018 Partners in Preservation campaign and it could win $150,000 with online support from the community.

The money would be used to retrofit the building's windows.

Partners in Preservation is a community-based partnership, created by the National Trust for Historic Preservation and American Express, to raise awareness of the importance of preserving historic places and their role in sustaining local communities.

The Women's Building, at 3543 18th Street, is a city landmark, though it was listed for its historical significance predating the modern LGBT rights movement. In May it became the second location in the city to be deemed a national historic site due to its LGBT cultural significance.

"Our building is state of the art in its service and respect for women. But our windows are 108 years old," Teresa Mejia, executive director, said in a news release. "Our windows are like inequality — out of date. We need the community to come together to help us win this grant so we can continue to serve women and their families for generations to come."

The Women's Building staff and volunteers this week began mobilizing thousands of building supporters through actions online and off.

"The Women's Building is a destination for tourists and locals alike," facilities director Noemi Zulberti said in the release. "Neighbors come here to get help with their taxes, continue their recovery, or take a yoga class. Visitors from all over the world come here to take pictures of our Maestra Peace Mural. We plan to ask every one of them to vote for us everyday of the campaign so we can all continue to enjoy what makes the Mission special."

Partners in Preservation has committed over $22 million to date in support of more than 200 historic sites across the country.

For more information, and to vote daily for the Women's Building through October 26, visit www.voteyourmainstreet.org/sanfrancisco, text votewb to 484848, or contact Anna Ghosh at anna@lightboxcollaborative.com or (415) 265-1568.

Health officials urge people to get flu shot
The San Francisco Department of Public Health urges that people age six months and older get their yearly flu shot this fall. The flu vaccine protects everyone's health — it prevents individuals from getting sick, limits the spread of flu from person to person, and reduces the chance of hospitalization, officials said.

"Getting a flu shot every year is the best protection we have against influenza virus," Dr. Juliet Stoltey, director of the health department's Public Health Communicable Disease Control and Prevention division, said in a news release.

The flu season generally starts in November and lasts through April. The vaccine provides protection starting two weeks after getting the shot. Officials said it's best to get the shot before the end of October. However, getting the vaccine in November or later can still provide protection, according to officials.

Flu vaccines are widely available at doctors' offices, clinics, and pharmacies, including the AITC Immunization and Travel Clinic at the health department (www.sfcdcp.org/aitc). For a list of San Francisco locations that offer free or low-cost flu vaccinations, visit www.sfcdcp.org/immunizations/where-to-get-immunized.

Poll workers will attend an in-person training prior to serving as clerks or inspectors on Election Day. Inspectors are responsible for bringing ballots and other voting materials to their assigned polling places on election morning and overseeing the operations at the site. Clerks assist with a variety of tasks, including checking in voters, answering questions, and handing out the "I Voted" stickers. For one day of service, poll workers receive a stipend ranging from $142 to $195, depending on assignment.

In Alameda County, poll workers are needed throughout the county on Election Day, officials said.

Bilingual poll workers are especially needed at designated precincts. Officials are seeking people who speak English and at least one of the following: Chinese, Punjabi, Khmer, Vietnamese, Korean, Spanish, or Tagalog.

Poll workers will receive a stipend of up to $205. To apply, visit https://www.acvote.org/community/pw-apply.

Castro Cares beer bust
Castro Cares, a program of the Castro/Upper Market Community Benefit District, will hold a beer bust fundraiser ahead of the Castro Street Fair Saturday, October 6, from 4 to 7 p.m. at Beaux, 2344 Market Street.

Organizers said that gay state Senator Scott Wiener (D-San Francisco) and gay District 8 Supervisor Rafael Mandelman will choose teams of three dancers each for a friendly dance off contest between the two crews. Drag queen Au Jus will emcee the festivities. Attendees will receive a bottomless beer cup with a $10 donation at the door.

Castro Cares, which started in the fall of 2014, takes a flexible approach to finding solutions to improve the quality of life for those living on the street and those who live, work, shop, and play in the Castro/Upper Market neighborhood. The program pays for 32 hours of San Francisco Patrol Special Police services and 20 hours of intensive homeless outreach per week.

For more information on the program, visit http://www.castrocares.org.