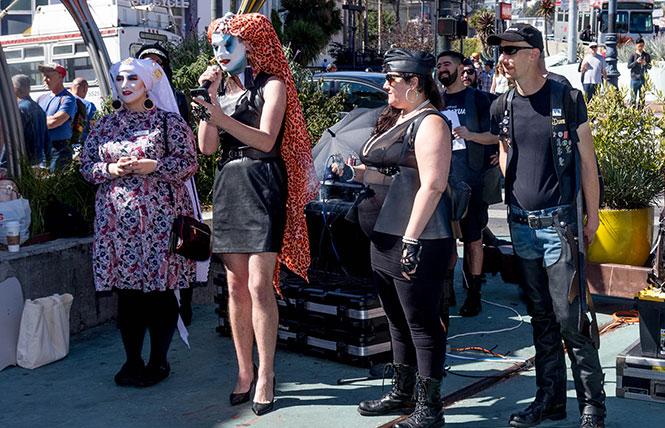 Members of the Sisters of Perpetual Indulgence and the leather community kicked off Leather Week at the annual Leather Walk September 23. Photo: Rich Stadtmiller

This weekend's Folsom Street Fair will be a coming out, of sorts, for the newly formed San Francisco Sex-Positive Democratic Club.

It is launching a website and Facebook group timed to the annual fetish event in the city's South of Market neighborhood. Its founding members will be at the SF Citadel's fair booth Sunday near the intersection of Ninth and Folsom streets to talk to people interested in joining the political group.

The club, believed to be the first of its kind in the country, has also begun the process to be formally recognized by state campaign finance officials, in order to raise money, and by the local Democratic Party, which is responsible for chartering Democratic clubs in San Francisco.

The club is working to host forums in October with the candidates running on the November ballot for the open District 10 and District 6 supervisor seats. It will not be endorsing in the two races this year, however, and expects to seek official chartership by the San Francisco Democratic County Central Committee sometime after Election Day.

"I don't know if one exists; I suspect we are the first," campaign consultant Mark Press, who is acting as the new club's president, told the Bay Area Reporter this week. "I would be thrilled if we were the first."

As the B.A.R.'s Political Notebook first reported in May, members of the city's sex-positive community, from leathermen and women to those in polyamorous relationships, decided it was time they formally organized in order to exert political power at City Hall. They are concerned about a host of issues, from protecting sex-positive venues and establishing the leather LGBT cultural district in SOMA to the creation of housing that can accommodate polyamorous families that need three bedrooms or more.

A key goal would be seeing more housing built in SOMA, particularly in or near the leather district, so that people are closer to the venues that cater to the sex-positive community. They also want to see better public transit options overnight for those who go out to, or work at, sex-positive nightlife venues.

Press, who is polyamorous and bisexual, has been involved in the BDSM/poly/queer communities for 10 years, including hosting and managing public and private parties. He was a bartender and barback for six years at the SF Cat Club in SOMA.

He also has worked on a number of political campaigns. In 2016 he was a deputy field organizer for gay state Senator Scott Wiener (D-San Francisco). This spring, he served as campaign manager for Noah Phillips' unsuccessful bid for Sacramento district attorney.

Press is now working as the social chair for District 6 supervisor candidate Sonja Trauss, who is in a non-monogamous marriage. She co-hosted the meeting in the spring with sex-positive community leaders where the idea of them forming their own Democratic club was first discussed.

Since then, more than 100 people have expressed interest in joining the club, said Press. The club will have an official opening gala sometime in November or December.

"I am very confident, once all this logistical nonsense is out of the way, we will very quickly build up and get membership," he said.

He is trying to secure venues for the two candidate forums to be held in late October. He chose to focus on the races for District 10, which includes Potrero Hill, and District 6, which represents SOMA, since they are the most impacted by sex-positive issues. In the races for the District 2 and District 4 supervisor seats, Press said he didn't think those candidates would benefit from being asked questions about sex-positive issues.

For the forums the club does plan to host, Press said the candidates will be given the questions in advance. His aim is not to embarrass anyone but to have a substantive discussion about the concerns of the local sex-positive community.

Once the club is established, Press said one of its first priorities would be to see San Francisco adopt a policy protecting people in polyamorous relationships from discrimination. As the B.A.R. first reported in May, Berkeley city officials are reviewing legislation that would prohibit discrimination in employment, housing, business practices, city facilities and services, or education on the basis of relationship structure.

While it would apply to the city and private entities, it would not cover religious institutions. And the policy is not meant to be an endorsement of polygamy, where a person marries multiple people.

Berkeley's city manager and city attorney have been working to refine the language of the new policy. A major sticking point has been ensuring employers, under the policy, would not be required to extend medical benefits to the partners of polyamorous people.

City Councilwoman Linda Maio, who sponsored the proposal, told the B.A.R. that she had spoken with the city attorney Monday, September 17, about the status of her proposed policy.

"The city attorney has the disclaimer language and is reviewing it with the entirety of the language in the document," wrote Maio in an email last week.

Last December, the council expressed support for banning discrimination based on a person's relationship structure in housing and employment and instructed city staff to fine tune the policy. Maio expects the City Council to take up the policy for final approval sometime this fall.

The Facebook page for the sex-positive Dems group is https://www.facebook.com/SanFranciscoSPDC/ and its website is at https://www.sfspdc.org/.
For inquiries about the club, email info@sfspdc.org.

In the contest for three open seats on the San Francisco Board of Education, EQCA endorsed Phil Kim, a gay man who works for a charter school operator, and Mia Satya, a transgender woman who works for the city's LGBT community center and has been active in youth issues for years.

Gay El Cerrito City Councilman Gabriel Quinto, who is serving as his city's mayor and is one of a handful of out HIV-positive people in elective office, secured EQCA's support for his re-election bid this year. EQCA also endorsed a trio of first-time out candidates for council seats in the region last Thursday, September 20.

It is backing Marlo Rodriguez, a lesbian nurse seeking the District 6 seat on the Oakland City Council, and Laura Parmer-Lohan, who lives in San Carlos with her wife and their two children. She is running for one of the three open citywide seats on her city's council.

The third candidate backed by EQCA is Shawn Kumagai, a gay man running for one of two council seats in the Tri-Valley city.

Web Extra: For more queer political news, be sure to check http://www.ebar.com Monday mornings for Political Notes, the notebook's online companion. This week's column reported on the death last month of a CA bill improving the rights of transgender inmates due to its estimated costs.

9/27/2018: This story was updated to reflect that Mark Press now identifies as bisexual rather than hetero-flexible and was one of several deputy field organizers who worked on Scott Wiener's state Senate campaign.