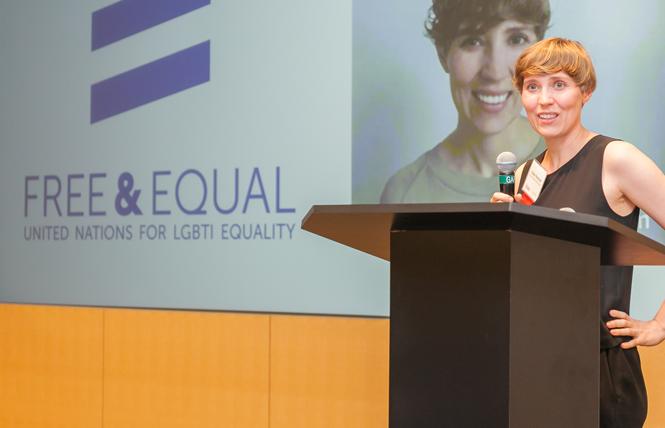 The night was significant as representatives of the UNFE campaign were honored by GGBA, along with Gap, for the work the entities have done to advance human rights and LGBT rights within the business and corporate sector.

Members also learned about what the 44-year-old organization accomplished the past year and its goals in the coming year.

"We weren't really the sexiest thing on the block," said Pendergast, pointing out the LGBT business community, the first to organize in the world, was falling under the weight of the HIV/AIDS crisis and city regulations, when Fisher told him he would sit right next to him at a meeting.

"It was corporate giants of San Francisco" led by Fisher "who decided to take a stand" to include LGBT businesses in shaping the business community and local policies, he said.

"That is the courage of what makes San Francisco so amazing," said Pendergast, pointing out that LGBT business leaders couldn't have gained respect without "people like Don Fisher."

Hennum, 37, is a human rights veteran working in the intersection of communications and social impact and international politics throughout her career.

"[Gap] has a very special place in our hearts," said Hennum, who joined the U.N. five years ago and was tapped to manage the campaign four years ago. "We do need to have a lot more companies to stand up for the human rights for LGBTQI people around the world, and the human rights for everyone."

She noted San Francisco's role in the establishment of the U.N. in 1945 and, decades later, Gap's role as one of the first corporations to sign onto the UNFE campaign when it was launched in 2013.

The campaign is a private-public partnership and multimedia program working with activists, community organizations, governments, and corporations around the world to influence and fight for LGBT rights.

During the past five years, the campaign's messages for equality for LGBT people has reached "hundreds of millions of people around the world," said Hennum, with teams working in more than 30 countries to achieve its goals.

Challenging times
However, the ideals of the U.N. regarding human rights are "increasingly hard, difficult to front these days," Hennum said, noting the pressures enforcing and promoting human rights has increased as countries back out of their obligations.

"LGBTI people around the world are living in very precarious situations, and at the same time, we are seeing that states are pulling back from their obligation," she said. "We see reactionary forces not shying away from weaponizing people's fear for political gain and LGBTI people, of course, are among the groups that end up paying the price."

"So, my question is: Who is going to step up to protect our rights when governments won't?" she asked.

Hennum recognized the limitations of activists, governments, and the U.N. connecting with, and influencing, people to promote human rights, especially for LGBT people.

To help companies, she said that last year the campaign launched the "Standards of Conduct for Business," a set of five principles businesses can follow to ensure equality within their own culture and to stand up for the human rights in the communities where they operate.

Nearly 180 companies, representing millions of employees and trillions of dollars in annual revenues, have publicly adopted the standards to date, including Gap.

"I don't think that it can be overestimated how important the private sector is if we are going to protect the rights of LGBTI people, not just here in the U.S., but around the world," she said.

"You have this gigantic opportunity to change the world. It's happening right now," added Hennum, who accepted the GGBA's 2018 Visionary Award on behalf of the UNFE campaign presented by deLucia.

John Baker is the senior vice president of strategic sourcing and executive sponsor of supplier and inclusion at Gap.

"It's important for companies to stand up and be heard, especially now in these times," he said.

Gap is setting the goal to be the number one company to work with diverse businesses within two years, he told the audience.

Remy Fisher, granddaughter of Fisher, accepted the GGBA 2018 Legacy Award on behalf of her family and Gap.

"This legacy of inclusion, equality, and diversity are pillar points in my life and you can rest assured that these values will be continued on for generations to come both in our family and here at Gap," she said during her speech.

SF LGBT businesses respond
Ackerman talked about the importance of inclusion in an email interview with the Bay Area Reporter.

"Corporations bring jobs and contribute to economies around the globe, in many places where they are killing or persecuting LGBTI people," wrote Ackerman. "These corporations can stand with the United Nations and help to create policy change or consider stopping their economic support of those nations."

To aid in the effort toward equality around the world, Ackerman wrote that the GGBA "will be encouraging all of our corporate partners and member businesses to sign on to the U.N. Standards of Business." The standards are part of the UNFE campaign.

That's just what Mary Birch, a 59-year-old ally who is the business development manager at Contractors Business Centers, did.

She was so inspired by Hennum's speech, she signed up for the campaign immediately following the event.

"I know that we are a very diverse company, but yet it's never brought up or spoke about," said Birch, who joined the GGBA and got her company, which is gay-owned, certified as an LGBT Business Enterprise last year. "It needs to have a voice, we need to talk about it, and I think we need to make everyone feel included in day-to-day operations."

For more information about the "Standards of Conduct for Businesses," visit http://www.unfe.org/standards.

Romania moves forward with anti-LGBT family referendum
Human rights organizations failed to block a proposed homophobic amendment to Romania's family law that could redefine what a family is in the country.

On September 17, the Romanian Constitutional Court, on a 7-2 vote, allowed the referendum to go before a public vote in October.

The same day, representatives of a coalition of human rights and LGBT organizations — Amnesty International, the European Commission on Sexual Orientation Law, and European Region of the International Lesbian, Gay, Bisexual, Trans and Intersex Association — filed a legal challenge to the constitutionality of the proposed amendment.

Earlier this month, Romania's senate approved the proposed referendum to redefine the current law under Article 48(1) to go before voters.

Currently, family is defined as "spouses." The proposed law will change the language to "freely consented marriage of a man and a woman."

Same-sex civil partnerships or marriage are not legal in Romania at this time.

In July, a same-sex married binational couple won a legal battle in the European Court. The court ordered member states of the European Union to extend residency rights to same-sex couples married in other countries.

The case was brought to the court by Adrian Coman, a Romanian, who married his American partner, Clai Hamilton, in Brussels in 2010.

The referendum was proposed by a coalition of 23 conservative organizations operating under the umbrella Coalitia pentru Familie. The coalition submitted 3 million signatures to Romania's government asking it to redefine family in the constitution, reported Euro News.

Advocates for the change in the law are framing it as a vote for or against "traditional family."

Voters are expected to go to the polls October 7.

If passed, the referendum could result in making it impossible to protect same-sex unions in the future, according to representatives of the LGBT organizations.

"Romania has a responsibility to protect all its citizens — straight and LGBTI. The definition of 'family' put forward by the supporters of this referendum is frankly inaccurate; it only captures a very limited fraction of what family means to people in 2018," said Arpi Avetisyan, litigation officer at ILGA-Europe, in a statement following the court's ruling Monday. "And it is also very out of step with reality and with the diversity of families being recognized by international human rights bodies and European courts."

"If approved, these changes would be a clear backward step for Romania and would have a severe impact on the lives of families not based on marriage," ?ernušáková told Euro News.

Katrin Hugendubel is the advocacy director at ILGA-Europe.

Hugendubel assured diverse Romanian families the organization was behind them.

"We see you, we support you and will continue to stand with you," she said.