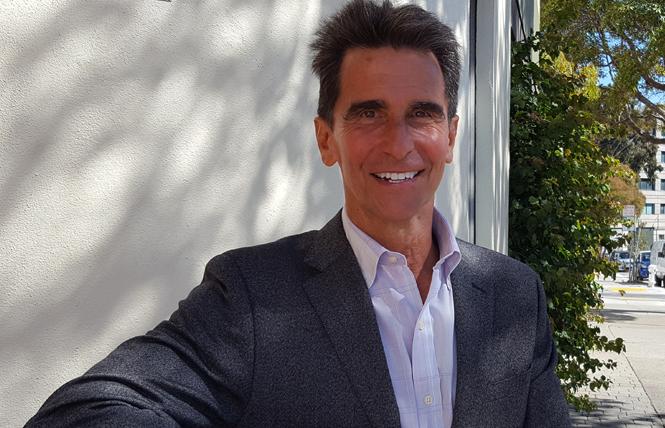 Despite losing the special mayoral election in June by 1.1 percentage points to London Breed, gay former state senator Mark Leno has ruled out challenging her in 2019 when she seeks a full, four-year term.

In an interview Monday with the Bay Area Reporter, Leno said that, "I have no plans to run at this time." He noted that any serious challenger would need to soon enter the race.

"It is coming up fast," he said of next November's election. "Whoever does run needs to start a campaign within months."

He declined to comment on how he felt his opponent in the race has been handling being mayor since her swearing-in ceremony in July. Breed sent him a "generous invite" to her inauguration, said Leno, who had a cordial conversation with her when he called to concede. But Leno, who spent the summer traveling to see friends and family, was out of town and unable to attend.

"Our new mayor deserves time to show she can address all the issues we debated," said Leno in his first extended media interview since conceding the race to Breed on June 13.

As for his own plans, Leno said he has decided to "take some time off" before deciding what his next role, if any, will be. After four decades of running a small business and serving in elected office, Leno said he is enjoying being out of the public eye.

"This is the first time in 40 years I have been able to stand still for a moment and look around," said Leno, who will turn 67 Monday, September 24. "People have been telling me I am looking more relaxed."

After celebrating the 4th of July in Bolinas at the home of Michael Tilson Thomas, the outgoing music director of the San Francisco Symphony, and his husband, Joshua Mark Robison, Leno flew to France where his sister and her husband own a home in the Provence region. He returned stateside to see Tilson Thomas in late August conduct at Tanglewood's centennial celebration of composer Leonard Bernstein.

From there he drove to Hudson, New York to spend time with his late partner's gay identical twin Wingate "Win" Jackson, 62, and his partner; Douglas Jackson died of AIDS in 1990. Leno ended the trip East in Connecticut visiting a boyhood friend from Milwaukee, where they grew up.

The time away allowed Leno to deal with losing his father in the midst of the mayoral campaign, the death of his mother a few years ago, and a diagnosis of retinal occlusion in his right eye earlier this year.

"I processed these major life occurrences within the context of my responsibilities as a candidate and a public person. I had more to process," said Leno. "That can happen differently, and perhaps more thoroughly, without that public exposure."

The day he was set to take part in a mayoral debate co-hosted by the B.A.R., Leno instead ended up at the hospital because one of the arteries in his right eye became blocked, cutting off oxygen to his retina.

"It happened in a flash," recalled Leno, whose sight in his right eye "has significantly diminished." While his left eye is fine, and he is still able to drive a car, Leno is only able to make out colors, forms, or shapes with his right eye.

"It only makes one more appreciative of what life has to give you," said Leno.

No regrets about mayoral campaign
Vying to become the first LGBT person to lead San Francisco, Leno landed in first place the day after the June 5 mayoral election, called due to the unexpected death of mayor Ed Lee in December. As more ballots were counted, however, Leno fell down to second place and never was able to overtake Breed's threadbare lead.

This week, Leno said he is not looking to run for mayor or any public office "right now," though he added, "in politics one should never say never" when it to comes to future campaigns.

Yet Leno noted that within the Democratic Party, both locally and nationally, there is a yearning to see younger candidates seek office.

"There is something to be said for a generational passing of the torch," said Leno.

Having moved to San Francisco in the early 1970s, Leno started his own sign making business. In 1998 then-mayor Willie Brown appointed him to a vacant seat on the Board of Supervisors.

"I was a very reluctant appointee," recalled Leno, concerned about keeping his business open and if he could handle the job. "Within a year or so I was a closet policy wonk."

He went on to win election citywide and then, in 2000, to the newly created District 8 seat on the board, which includes the gay Castro district and Noe Valley where Leno lives. Leno became one of the first two out gay men to win state Assembly seats in 2002 and six years later the first gay man to win a state Senate seat. He was termed out of the Legislature in 2016.

He had been laying the groundwork to run for mayor in 2019, but those plans were upended by Lee's sudden death. Looking back, Leno said he has no regrets about the mayoral campaign he ran. He referred to the Hebrew word b'sheret, which means something is meant to be, and said his becoming mayor was not b'sheret.

"I am not one to rue or regret by nature or design," he said. "I feel we ran a great campaign despite of, or because of, the challenges thrown at me."

He has not been contacted about a possible position within Breed's administration, nor has he been approached about joining Gavin Newsom's cabinet should he be elected the state's next governor come November. He said such a role is unlikely, as he does not want to live in Sacramento.

The policy areas he is most concerned about, and thus would entertain opportunities to work on, are criminal justice, health care, and voting reforms.

"There is a big and beautiful world out there," noted Leno.

Gay District 8 Supervisor Rafael Mandelman, an early backer of Leno becoming mayor, told the B.A.R. that he hopes to see him remain in the policy arena in some manner.

"I was proud to support Mark and, throughout that campaign, I felt increasingly confident that he really would have been a really good mayor. But I also have complete respect for his feeling that he doesn't want to do that again right now," said Mandelman. "It is for him to decide. I think he is tremendously talented and has a lot to contribute, and I am sure he will find a way to do that."

One idea Leno has contemplated is becoming a foster parent. He lives alone in a two-bedroom home at the moment, though he is often on the road and unsure of what his future plans will be.

"Friends have suggested I get a dog first," he joked.