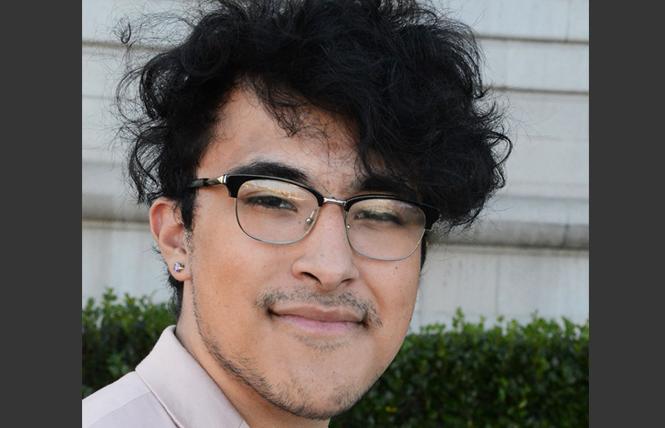 The San Francisco Youth Commission swore in a new nonbinary chair and transgender vice chair last week, and almost one-third of its members identify as LGBTQ.

The commission is a body of 17 youth between the ages of 12 and 23 who represent the city's 11 supervisorial districts. It was created by voters under a 1995 amendment to the City Charter and is responsible for advising the Board of Supervisors and the mayor on policies and laws related to young people.

This year the commission plans to work on issues surrounding gun violence, violence in schools, voting rights, and increasing affordable housing. Chair Bahlam Javier Vigil, 20, is genderqueer and prefers gender-neutral pronouns. Vigil was a commissioner last year, and decided to run for chair, which they won by a 12-5 vote.

"My motto as a person of color is that it's my responsibility to ensure that people with a similar skin color, and all other minority groups, get the representation they deserve and need," Vigil told the Bay Area Reporter.

Their vision for the commission includes making "drastic changes for a more accountable and productive commission." Vigil, the District 11 representative, plans to make some logistical changes, including creating two legislative affairs officer positions on the commission. Currently it only has one.

Vigil also encouraged his executive officers to build stronger relationships with individual members of the commission, something that was lacking last year, they said.

"When you build personal relationships, you can support one another a lot more," Vigil said.

An example Vigil gave of this was if LGBT members have experienced something personal that they don't want to share with the commission as a whole, they can personally reach out to an executive officer who can advocate on their behalf.

Vigil will also put in place more detailed and structured job duties for each role of the commission to make meetings run more efficiently, along with requiring the three committees to submit a monthly report to the executive members of the commission detailing what they are working on.

"There is a lack of queer and trans youth representation at the city government level. As a youth commissioner, I want to use this platform as an opportunity to raise awareness of issues LGBTQ youth face in the city because our needs are not being met under this current system," Ty, who uses gender-neutral pronouns, told the B.A.R. "If we don't address these issues, LGBTQ youth will remain disconnected, unheard, and invisible to their peers, community, and elected officials. By giving queer and trans youth opportunities for leadership, San Francisco will be taking a step toward the right direction of positive social change."

When asked what they thought about the commission's executive roles being filled by trans and nonbinary youth, Andam replied, "I think it's amazing. Representation is so important, especially for the chair and vice chair," he said.

Vigil said they are currently working with District 9 Supervisor Hillary Ronen on conducting a joint hearing about the handling of an incident at Balboa High School in late August, when a student brought a gun to school. Reportedly, the gun accidentally went off although no students were injured by gunfire.

"We want to go to the community meetings about this as commissioners and use our title to influence the issue there and bring more attention to it," they said.

As well, the lack of affordable housing is affecting the youth and families of San Francisco, Vigil said, and they would like to see more funding dedicated to the city's Small Sites Acquisition Fund.

"I'd like to see more money funded to that budget so that San Francisco can buy property and regulate their own prices instead of developers buying it all up and not offering residency to low-income people because of profit."

Last year, the commission advocated for more family-friendly open space in the city, including recommending that the planning department increase the number of public parks and public open spaces in the South of Market and Chinatown neighborhoods.

Andam, who is an immigrant from Ghana, Africa, said he would like to focus on the issues and challenges that undocumented youth face.

"Because I am an immigrant and I live in a time in my country when there is a lot of anti-immigrant sentiment, I want to advocate in any way that I can for that," he said.

Last year, the commission recommended to the Board of Supervisors and the mayor that they continue to honor San Francisco's sanctuary city status. As well, that San Francisco families facing deportation have access to guaranteed legal support, via the public defender's office and community organizations.

Andam, who was a commissioner last year, worked on the recommendation that the commission put forth to the supervisors that urged the city's Department of Children, Youth, and Their Families to allocate $60,000 toward California ID fee waivers for youth.

Ty said they would like to see LGBTs receive "safer access to resources for housing, employment opportunities, and education," and that the commission needs to deal with "homophobia, transphobia, and threats to our safety when navigating these institutions."

The youth commission had its first full meeting on Monday, September 17, and will convene again October 1.

Update: 9/20/18 This story has been updated to correct that the legislative aides on the youth commission are elected by the commission itself, not the Board of Supervisors.