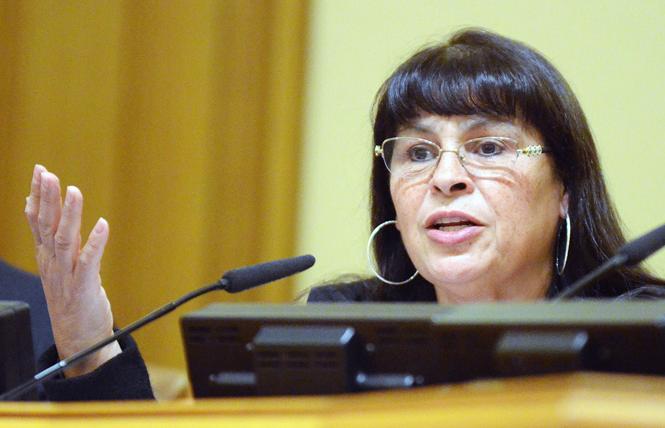 Brian Egg's headless torso is believed to have been left to decompose for more than two months in a fish tank in his South of Market home before being discovered last month.

During the police commission's regularly scheduled meeting Wednesday, September 12, DeJesus' attempts to question Scott on police policy were met with opposition from the commission's clerk and Commission President Thomas Mazzucco, who argued that the question needed to be put in an agenda item before it could be discussed.

The commissioners put off discussing the case until the panel's next meeting, October 3.

DeJesus had argued that her line of questioning was in order because it was related to Scott's opening remarks at the meeting updating the commission on various public safety concerns.

"The chief brought it up, he just made a big speech about protecting the public, being here for everyone," DeJesus said. "That's their job, and I'm asking in a general sense what — how that job encompasses the wellness doctrine."

Without any fellow commissioners voicing support for her questioning, DeJesus agreed to discuss the case during next month's meeting.

Scott has not responded to the Bay Area Reporter's requests for comment on the case. DeJesus told the B.A.R. that she has serious concerns about the police handling of the case and wanted to get all the facts before passing judgment on the department's actions.

A headless corpse was found in a large aquarium at Egg's Clara Street house on August 14. The official identity of the remains is waiting on DNA testing, but family and friends have no doubt that it is Egg's remains.

Egg would have turned 66 last Tuesday, Sept 11. Friends, neighbors, and family gathered at Egg's house for a vigil that evening. Neighbors have been critical of police for not taking their concerns over Egg's disappearance seriously. Police say officers knocked on Egg's door on three separate occasions but left without entering the home. Neighbors say that after one of the police checks on the house in July, they saw someone frantically cleaning with bleach, raising the possibility the police inaction resulted in key evidence being destroyed.

Police said officers knocked on Egg's door a third time August 7, after his sister filed a missing persons report. That sister, Lynn Egg Jackusovas, broke ranks with neighbors at the vigil, reading from a statement that expressed support for police.

"We want to express our sincere gratitude to the San Francisco Police Department along with the district attorney," she said. "They have treated this with the highest concern since we first reported Brian as possibly missing."

Police had initially arrested and charged two men, Robert McCaffrey and Lance Silva, with the homicide, but the district attorney dropped the charges pending further investigation. McCaffrey, 52, was released, but Silva, 39, was kept on a probation hold out of Alameda County. Police say McCaffrey met a private crime scene cleanup crew at the house on August 14 and that the company was paid by Silva with Egg's debit card. Silva also used Egg's card to pay for a car on June 1, police said.

Investigators say Egg was last seen in his neighborhood some time in late May or early June. On August 3, neighbor Karen Macedo posted on the Nextdoor site about her frustration in getting police to take her concerns seriously. Macedo wrote: "I contacted the police yesterday and they told me they went by 3 days ago. They spoke to someone that is living there and told me they cannot release details but "Brian is fine" and hung up."

Her call apparently did not generate another police door knock. Police said they visited the home twice in July after getting calls from neighbors and once again August 7 after being contacted by Egg's sister.

Another neighbor, Shelley Costantini, told the B. A. R. that when she tried to report her suspicions to police August 13, she was given the runaround but after a couple of calls was able to leave a voicemail message. Police called her back the following day but her concerns did not result in another visit to the home. It wasn't until that evening, when neighbors called police when they saw the crime scene cleanup crew arrive that police finally entered the home.