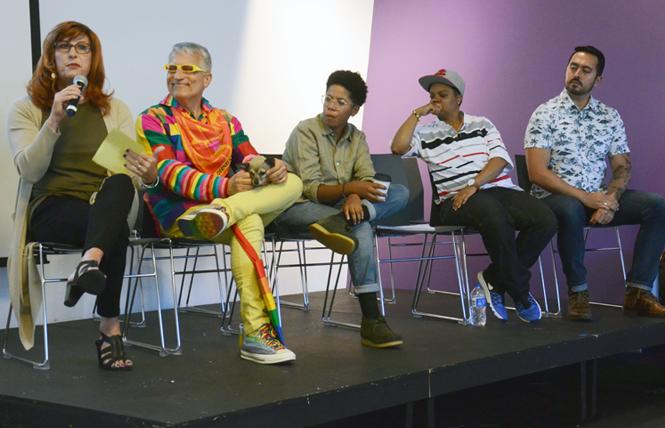 The board that oversees San Francisco Pride will have some new members, and its longtime president will be stepping down, following the group's annual meeting September 15 at the LGBT community center.

A seventh candidate, incumbent Anietie Ekanem, who currently serves as vice president, dropped out of the race for personal reasons.

The new board members will be seated at the San Francisco LGBT Pride Celebration Committee's October 3 general meeting, at which time a new president and vice president will be chosen.

The afternoon included the announcement from current board President Michelle Meow, who said that she would be stepping down next month from her position and the board.

"SF Pride will always be home and family to me," Meow told the Bay Area Reporter. "I'm not going anywhere, as I hope to continue with many projects that I have started: short documentaries featuring the grand marshals with local filmmaker Jethro Patalinghug, the parade broadcast I helped save, media campaigns, fundraising, and so on."

She said that she will continue focusing on programming she does for the Commonwealth Club of California and her local TV show that has a new home at KBCW.

"I'm also excited to be a source of support for my wife as we navigate life as a new immigrant family," Meow said. "My next volunteer project may be political and/or grassroots. Visibility is the backbone of our movement, I'm ready to harness all that I have learned at Pride and make a difference in areas of our most vulnerable."

Candidate statements
The voting process began with a statement from each candidate, followed by a Q&A. Attendees then cast their ballots.

Pham, who was out of town celebrating Houston Pride, sent a video message.
"I had a really great time collaborating with colleagues and implementing stability," Pham said. "It's important to have stability with recordkeeping."

Lynch said, "I want to make space for young people and for the generations which came before," they said. "I have tons of administrative and fundraising experience. I love Pride, so vote for me."

"The thrill of protesting and marching as a member of the Resistance Contingent the last two years has given me a unique perspective of the meaning of Pride," she said. "The current board and staff have given us a blueprint on how to run and sustain the premiere LGBTQ statement event in the world. If elected, I will strive to maintain that blueprint while looking for ways to be more inclusive and responsive to our people. I pledge to be a supportive team member who always looks to advance SF Pride."

Beaudette recalled moving to San Francisco in 1978 and participating in the White Night riots a year later. The riots were the community's response to the light sentence given to former San Francisco Supervisor Dan White, who had assassinated gay supervisor Harvey Milk and mayor George Moscone at City Hall.

"There's too much of a narrative that looks like me," Beaudette, who is white, said, as he held up magazine covers featuring gay African-Americans James Baldwin and Bayard Rustin.
"I'd like to bring this to Pride," Beaudette said.

Wysinger recalled her work as an educator, an author, a black queer podcaster, and an organizer of Pride celebrations in other cities. She expressed her desire to represent black queer women and hopes to bring more black queer people to Pride.

Perez spoke of his life as a first-generation queer Mexican from a migrant family. His goal is to support current initiatives that connect more people to Pride and explore new opportunities to unite new voices to the organization's efforts.

During questions, candidates were asked what they would do if they could wave a magic wand and change the parade moving forward.

"To make sure we hear the amazing black queer voices," said Wysinger.

"Getting better at telling our stories," said Perez. "This is a year-round process."
"When I walk around Pride I don't see enough history," added Beaudette. "Maybe put up a history booth."

Candidates were also asked about what they might do to make Pride more inclusive for people with disabilities.

"To listen," said Ford. "Finding organizations that know better than you, making sure that the disabled are part of the celebration."

After the Q&A the voting process took place. Each person could vote for as many or as few candidates as they chose. Twenty-eight ballots were cast, with each candidate needing 15 or more votes to win. Perez was the top vote getter, receiving 24 votes. Wysinger got 23, Ford got 22, Beaudette took 21, Lynch took 20, and Pham came in with 18. All six candidates were then declared winners.

Beaudette told the B.A.R. that he was delighted to have won.

"I'm excited to learn more about Pride and to bring my knowledge of other communities into this organization," he said. "I hope to share as much history as possible and to create role models for people — to define people who look like you. Harvey Milk and Harry Hay (founder of the Mattachine Society, an early gay activist group) were great, but what about Jose Sarria and Bayard Rustin?"

Pride board member Jacquelene Bishop, whose seat was not up for election this year, said that she felt great.

"People who want to show up to support the agency and the cause is a good thing," Bishop told the B.A.R. "Our power comes from the strength of our community coming together. I'm happy that people are going to do this work."

"Today went extremely well," he said. "It's always encouraging to have individuals who want to be engaged with Pride and the governance process. We have a very diverse board and the outcome of today's election just strengthens that."

The 2019 Pride parade and celebration will take place June 29-30. The theme will be "Generations of Resistance," in commemoration of the 50th anniversary of the Stonewall riots.