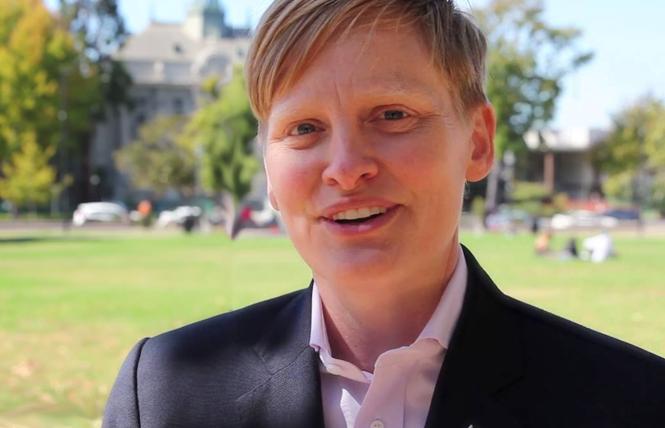 There are five out LGBT candidates in the race for seats on the Berkeley City Council.

Lori Droste and Kriss Worthington are currently the only LGBT members on the governing body. Worthington, the city's first openly gay city councilman, announced in July that he would not run for re-election after serving 22 years, citing the need for new perspectives on the body.

Droste, a lesbian who currently holds the District 8 seat, is running for re-election to a second four-year term. She is running against planning commissioner and attorney Mary Kay Lacey, green transportation designer Russ Tilleman, and Alfred Twu, a designer and artist who is nonbinary.

Droste, 45, has scooped up endorsements from Equality California, and the East Bay Stonewall Democratic Club. According to her website, as a councilwoman she has overseen the creation of a small business subcommittee, secured over $400,000 in traffic calming measures for her district and the city, and authored an initiative that the city now participates in called Vision Zero, a nationwide effort to eliminate pedestrian and bicyclist fatalities.

When talking with the Bay Area Reporter, Droste said her main priorities are, and will continue to be, finding solutions for the housing and homeless crisis plaguing the city.

In October 2015, the council passed Droste's Green Affordable Housing Package, which prioritizes housing over underutilized parking spaces in new developments, and streamlines the city's multi-year process to approve affordable housing projects, something she will continue to work toward. This includes minimizing the permit process for accessory dwelling units and other affordable housing options, she added.

"We need to be able to streamline affordable housing legislation and cut several years off of the approval process," Droste said. "We need it now, not five years from now."

Berkeley's Mobile Crisis Team, outreach workers for people in distress, is a valuable asset to the city, Droste explained, and she plans to boost its funding and staff.

"We need to make sure we can get people off the street and into services," she said, adding that homelessness disproportionately affects the LGBT community.

In mentioning her vision for economic vitality, she said she recently submitted planning and zoning amendment proposals to the planning commission that make it easier for small businesses to move into ground floor retail spaces.

Droste also emphasized her ability to work effectively with other councilmembers, using the Vision Zero initiative as an example.

"It speaks to my ability to build a coalition and pass legislation that everyone favors and has broad based support," she said.

Droste is the first out lesbian councilwoman in Berkeley. She lives with her wife, Carrie, and their two young children, Simon and Cora, in the city's Elmwood district. She teaches at Mills College in the public policy department.

Revising zoning to allow more apartments near transit centers, corner stores, and backyard duplexes are a part of their housing vision for Berkeley. They also support state and local housing bonds and Proposition 10 on the November ballot, which would repeal the Costa-Hawkins Act that puts limits on how cities can implement rent control measures. 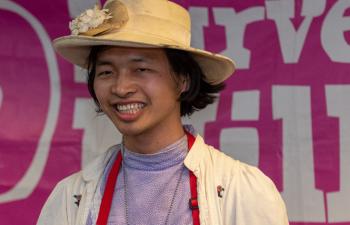 "One of the biggest challenges we are facing in Berkeley is the housing crisis and the general shortage of housing," Twu said.
"The district I am running in is one where almost no housing has been built in the last several years and I'm going to work on changing that."

Reducing negative environmental impacts is also one of their top priorities. If elected, Twu would lead the effort to reduce driving, incentivize mass transit and electric or smaller cars, and introduce legislation to make Berkeley a leader in plant-based and vegan food businesses.

Lastly, Twu emphasized responsible funding for the programs and legislation they would implement, explaining that if District 8 were to reinvent how funding is originated and distributed, it could make a larger, positive impact on Berkeley as a whole.

"An overarching point to make is that among many of us socialists in the left or progressives, all the things we want: single-payer health care or housing mediation services, there is not a lot of attention as to where funding is going to come from, and I really want to work on that."

An example of this on their website is funding the retrofit of Alta Bates Hospital through the creation of a new housing bonus program with fees dedicated to saving the facility.

Being nonbinary has shaped their perspective on politics, Twu said. They see two sides of every issue and want to create a solution that addresses both. Their identity has also helped shape their platforms, as each disproportionately affects the LGBT community.

"Two groups in conflict with one another, both sides have very valid points, and the real solution involves a bit of both," they said.

As an activist, Twu has fought for tenant protections, affordable housing, cooperatives, and expanding the housing supply. They have served on Berkeley's Zero Waste Commission and has over 12 years of experience designing housing. Currently, they work for an architectural firm and as a freelance designer. 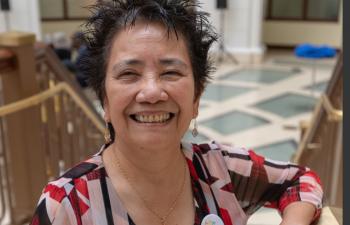 District 7
In District 7, Cecilia "Ces" Rosales, a lesbian small business owner, and nonbinary candidate Aidan Hill are running against straight candidate Rigel Robinson, 22, for the seat held by Worthington, who has endorsed Robinson.

Rosales, 69, ran for the council seat eight years ago against Worthington. She is a longtime activist and a refugee from the Philippines when the country was under the dictatorship of Ferdinand Marcos. She has lived in the district for almost 20 years and said it needs a councilmember who can represent the interests of students and longtime residents.

"This is not a career move for me," she told the B.A.R. "I'm stepping forward as an activist. When I see a need, I have to step forward and I believe that the district needs a representative to represent Berkeley as a whole."

If elected, she would champion public safety for Berkeley neighborhoods; innovative housing solutions; equity in housing, employment and services; and support environmentally friendly policies and the growth of small businesses.

Homelessness is a regional issue, Rosales said, and the solution should reflect that with policies that include other Bay Area cities.

"We need the Legislature to step up," she said. "It's not acceptable."

Hill said their candidacy is influenced by their identity as a nonbinary person of color. They strongly emphasized their efforts for the equality of LGBTs, particularly trans people.

"It's time we take gender equity and sexual liberation seriously in this country," Hill said. "It's not enough anymore for us to want tolerance. We want justice, full visibility, and acceptance outside as human beings."

One of their main platforms is police reform, something they said disproportionately affects the trans community in Berkeley. They would work to implement city policies and guidelines that help protect trans people and hold police officers accountable for discriminatory behavior. 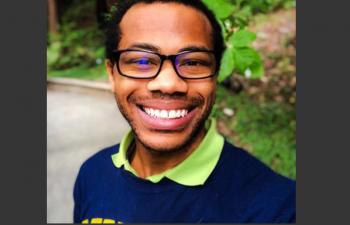 A strong supporter of Berkeley's sanctuary city law, Hill would encourage city agencies not to work with the federal Immigration and Customs Enforcement agents and work to increase the rights of undocumented residents.

More gender-neutral bathrooms, rights for polyamorous couples, and support for AIDS prevention and care programs, are ways Hill would help advance the rights of the LGBT population.

Other top campaign platforms of Hill's include public housing as a human right and ending hunger in Berkeley. More tiny homes, low-income housing options, and community spaces are some of their ideas surrounding housing.
Hill would like to see UC Berkeley convert the unoccupied chancellor's residence, University House, into student housing. No development, however, should take place at Berkeley People's Park because of its historical and cultural significance, they said. The park was created during the radical political activism of the 1960s, including a major confrontation between student protesters and police in 1969.
"I want to save the legacy of the free speech movement and People's Park," Hill said.

If elected, they would focus efforts to lessen hunger, particularly increasing food and water access to low-income residents. Hill was formerly homeless and talked about the correlation between mental health and hunger. A food program in which close-to-expired food would be distributed by a public agency to the homeless and those in need is a goal of the candidate.

Hill is a dog walker and former UC Berkeley student where they studied political science and public policy. They have worked at Planned Parenthood as an action fund student coordinator.
Robinson talked briefly with the B.A.R. and said his campaign was going "fantastic."

A self-identified straight ally, Robinson has worked at the state level at the UC Board of Regents advocating for students and recently concluded his role as external affairs vice president of the Associated Students of the University of California. In addition to Worthington, he has been endorsed by Berkeley City Councilmembers Ben Bartlett and Susan Wengraf, and Mayor Jesse Arreguin.

"I've been fighting to elevate student narratives at every level of government and, today, I'm running for Berkeley City Council because it's time for students to have a seat at the table," he wrote in an email. 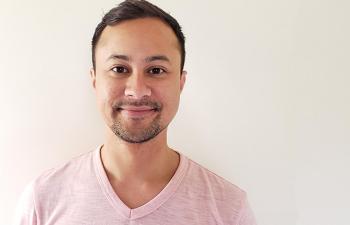 District 4
Gregory Magofna, a gay man, is running in the District 4 race against incumbent Kate Harrison. The other candidate is Ben Gould, a sustainability analyst for the City and County of San Francisco.
Magofna is running to improve the housing situation, reduce climate change, and support the diversity of Berkeley.

"Berkeley is at a pivotal point where, rather than reacting and fighting change, we need to think proactively and decide who we want to be as a city in five years, in 10 years, and into the future," his website states. Magofna did not return a request for comment from the B.A.R.

His website states he would support "good growth" policies, including mixed-use development in downtown Berkeley and along transit corridors, the development of accessory dwelling units on private property, and the implementation of policies that would reserve a portion of new affordable housing to Berkeley residents and workers at risk of displacement.

Like Rosales, Magofna also promotes options for co-housing and community land trusts as permanent affordable housing options along with reserving 25 percent of new apartment developments for low- and moderate-income households.

Reducing traffic by offering more transit choices and incentivizing private and commercial environmentally friendly construction options are among his green-energy use ideas.