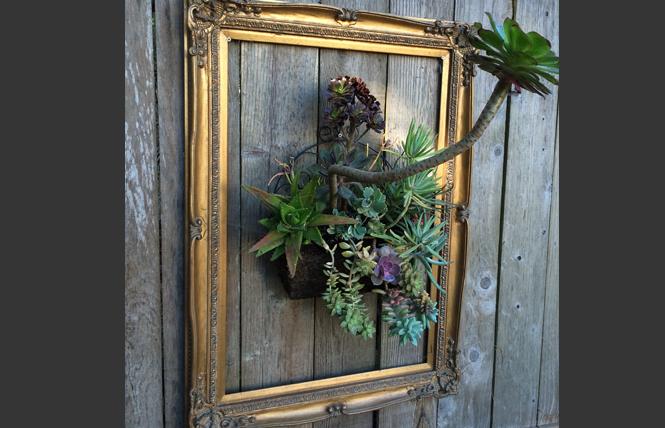 One of the many unique gardens in the Portola neighborhood. Photo: Courtesy SF Public Library.

The 12th annual Portola Garden Tour will take place Saturday, September 29, from 10 a.m. to 3 p.m. and tickets are available.

Once home to flower-growing enterprises and farms, the Portola is known as San Francisco's garden district. The upcoming tour is a self-guided walk through private and public gardens in the sunny Portola neighborhood in the city's southeastern quadrant. Organizers said that there is a surprising array of hidden gardens behind primarily mid-century homes.

The tour is a fundraiser for City College of San Francisco's horticulture students.

Participants will learn about what plants thrive in the city and how to make even small spaces outstanding; ideas for decks and patios; and fun landscaping tips.

The event started out in 2007 as a fundraiser for the Portola library, and officials said that once the branch opened in 2009, the community decided to continue the event and created the Portola Garden Scholarship at City College for environmental horticulture and floristry department students. To date, 17 scholarships and three work projects in the Portola have been awarded to City College students.

The library's own public garden and seed lending library will be on the tour.

Tickets are $25 or $20 each for two or more. They can be purchased at www.brownpapertickets.com/event/3594065. Garden locations will be listed on tickets.

New this year will be an after-party at 3 p.m. at Ferment, Drink, Repeat (FDR) brewery, 2636 San Bruno Avenue in San Francisco.

Free sno-cones at SFPUC events
The San Francisco Public Utilities Commission is celebrating 100 years of clean power with free sno-cones made from 100 percent Hetch Hetchy water, and there will be a station at the LGBT Community Center, 1800 Market Street, Friday, September 14, from 11 a.m. to 1 p.m.

Officials said that, since 1918, the SFPUC has been harnessing the natural force of gravity to create clean power as water flows downhill from Yosemite to the Bay Area. This energizes city streetlights, Muni, schools, City Hall, the zoo, hospitals, San Francisco International Airport, and more.

Other Friday locations for the sno-cones include the Exploratorium, Pier 15, The Embarcadero, from 2 to 4 p.m.; and the Orchard Garden Hotel, 466 Bush Street, from 5 to 7.

New exhibit at GLBT museum
A new exhibition marking the 40th anniversary of the defeat of the Briggs initiative will open this week at the GLBT History Museum, 4127 18th Street in San Francisco.

Proposition 6, as it was known, was on the California ballot in 1978 and would have banned gay people and supporters of lesbian and gay rights from teaching in public schools. "The Briggs Initiative: A Scary Proposition" recounts the history of this turning point for LGBTQ rights.

Sponsored by then-state Senator John Briggs, Prop 6 was part of a wave of homophobic ballot measures across the U.S. On November 7, 1978, Californians decisively voted down the measure. The No on 6 campaign was the first to succeed in stopping anti-gay forces in the voting booth.

Curated by Susan Englander, Paula Lichtenberg, and Glenne McElhinney, all veterans of the No on 6 campaign, the exhibition includes flyers, posters, buttons, videos, and other scarce materials from the archives of the GLBT Historical Society and the San Francisco History Center of the San Francisco Public Library.

The exhibition runs through January 20.

Art for Life auction
Face to Face's annual Art for Life, the longest-running art auction to end HIV in Sonoma County, will take place Saturday, September 15, from 2 to 6 p.m. at the Sebastopol Center For the Arts, 282 South High Street in Sebastopol.

Attendees can bid on more than 200 works of art that include paintings, sculpture, pottery, jewelry, and glass donated by Sonoma County artists.

What began in 1988 in response to the AIDS epidemic in Sonoma County has grown to a much-anticipated annual art event to benefit care services for the more than 600 men, women, and children living with HIV/AIDS.

Stein, a gay man and the Jamie and Phyllis Pasker Professor of History at the university, said that this year he will present a lecture focusing on the legal struggles to establish LGBT student groups on campuses across the U.S. in the 1970s.

Advance registration is strongly encouraged, as appointments will be filled on a first come, first served basis. To sign up, visit https://legalclinicsept2018.eventbrite.com.

Openhouse, On Lok partner for LGBTQ seniors
Openhouse and On Lok, two San Francisco-based nonprofits, last week announced a strategic partnership to co-design a program for LGBTQ seniors to address access to aging services and the fear that life in a nursing home would drive most back into the closet.

A study by the National Senior Citizens Law Center revealed that a majority of LGBTQ seniors felt it would be unsafe to be out in a care facility and that staff and other residents would discriminate against them. Forty-three percent reported personally witnessing or knowing LGBTQ individuals who experienced instances of mistreatment.

Karen Skultety, Ph.D., executive director of Openhouse, and Grace Li, CEO of On Lok, said in a news release that the risks are even higher for trans seniors. Denial of care is common, and many report thoughts of ending their lives rather than moving into long-term care.

The program is expected to begin next summer.