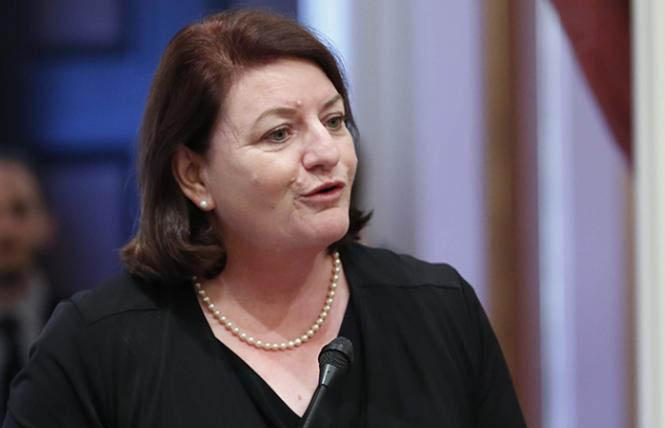 There are new and easier procedures in place for transgender and gender- nonconforming people to change their name and/or gender on state-issued documents.

Almost a year after Senate Bill 179, known as the Gender Recognition Act, was signed into law last October by Governor Jerry Brown, portions of it were implemented September 1.

Authored by lesbian Senate President Pro Tem Toni Atkins (D-San Diego), the bill allows transgender, nonbinary, and intersex Californians to change their gender marker on their birth certificate and, starting in January 2019, their driver's license without a doctor's recommendation. It also makes California the second state in the county to offer a standard path to obtaining a nonbinary gender marker on state documents, according to the Transgender Law Center.

"When Governor Brown told me he had signed SB 179, it was one of the proudest moments of my career," Atkins said in a September 4 news release. "Mindful of all the people I know who are gender-nonconforming, and the families I know with transgender children, I wanted to make sure that California continued to be a leader in gender-identity equality. I am thrilled to see SB 179 and SB 310 implemented and grateful to our courts for their work to ensure a streamlined application process."

SB 310, also authored by Atkins, is the Name and Gender Act.

An online resource is available for people seeking a gender or name change at www.courts.ca.gov/genderchange.htm. The site provides step-by-step instructions for adults and minors.

According to Shawn Meerkamper, staff attorney at TLC, a court order to receive a gender change on a birth certificate is only required for people who were born out of state. The process also no longer requires a physician's declaration.

Instead, individuals need to submit an affidavit attesting, under penalty of perjury, that the request for a change of gender is to conform their legal gender to their gender identity and not for any fraudulent purpose.

In January, changing a gender marker on a driver's license will also no longer require a physician's declaration. The Department of Motor Vehicles will allow individuals to select a gender category of female, male, or nonbinary for California driver licenses or identification cards, without all the paperwork, including medical documents.

To receive a name change, regardless of birth state, a court order is required. Although it is no longer required, many trans and nonbinary people born in the state still get a court order for a gender change simply for "extra proof," Meerkamper said.

Aside from making the process more streamlined, Meerkamper said, the fact that trans and gender-nonconforming people no longer need a doctor to legally determine their gender is both legally and symbolically significant.

"People don't understand how big of a deal it is," Meerkamper told the Bay Area Reporter. "For the first time in California our courts are not going to require someone to have a doctor sign off on someone's gender identity."

Before the bill was passed, Meerkamper said people living in rural parts of the state had to drive long distances to be able to find a doctor who was trans-friendly.

"For minors, it makes it less likely for judges to abuse their discretion in working with trans kids," he said.

The court order process for both name and gender change includes filing petitions, along with filling out an issuance of a new birth certificate form with the Superior Court of the county of the requestor.

After the forms are filed, the court will issue an Order to Show Cause for Change of Name to Conform to Gender Identity. If no good cause objection is filed within six weeks, the court will grant the request without a hearing. Before Atkins' bill was passed, the law required that a person seeking a change in gender marker and/or name by court order appear in court even when no timely objection had been filed.

Equality California, the statewide LGBT advocacy organization that sponsored the bills, called it a matter of fairness.

"The implementation of these laws represents California's commitment to treating transgender, nonbinary, and gender-nonconforming residents with the dignity and respect they deserve," said Rick Zbur, EQCA executive director, in a news release. "These are matters of fairness. We're proud to be fighting alongside Senate President Pro Tem Atkins to ensure every Californian has access to identification that reflects who they are and anyone who faces incarceration is set up for successful reentry into society when they're released."

TLC also provides an online resource with frequently asked questions for people interested in making the changes at http://www.transgenderlawcenter.org/archives/14230. Their website calls the bill groundbreaking.

"We're glad that nonbinary people in California will finally have access to identity documents that reflect who they are. Having appropriate ID is an issue of public safety for many trans, nonbinary, and gender-nonconforming people, who may be subject to discrimination, harassment and even violence when they're forced to carry inaccurate or mismatched documents," Kris Hayashi, TLC executive director, said in a news release. "The new law also removes costly and outdated barriers to updated IDs and birth certificates that fell disproportionately on incarcerated trans, nonbinary and gender-nonconforming people and those without access to affirming healthcare. SB 179 and SB 310 are two strong steps toward recognizing the dignity of our community in California."

Wahls runs for office in Iowa
A straight man whose testimony on behalf of same-sex marriage went viral several years ago is campaigning for a seat in the Iowa state Senate.

If elected, Zach Wahls said he may be the first state legislator that is the adult child of LGBT parents. Wahls, 27, is the Democratic nominee for Iowa Senate District 37 after he won his primary with 59.8 percent of the vote in June.

"We are not taking anything for granted, but are feeling good about our chances," Wahls said in a recent interview with the B.A.R.

The candidate first garnered national attention when he was 19 years old. In 2011, Wahls gave a three-minute speech before the Iowa House Judiciary Committee, urging it not to pass a constitutional amendment that would ban same-sex marriage and civil unions. He shared his story about growing up with two lesbian moms. The recorded testimony went viral, becoming YouTube's most-watched political video of 2011.

"In my 19 years, not once have I ever been confronted by an individual who realized independently that I was raised by a gay couple," said Wahls in his 2011 testimony. "And you know why? Because the sexual orientation of my parents has had zero effect on the content of my character."

When asked by the B.A.R. how he will represent the LGBT community in Iowa and nationally, if elected, he said it starts with listening.

"A huge part of that is engaging with people," he said. "I will continue to listen to our community and their concerns that arise and get them taken care of. Another big part is visibility, helping people know they are being represented by someone who, frankly, is an advocate is really important in Iowa."

He noted in the current political climate and the rollback of LGBT rights stemming from President Donald Trump's administration, he will make sure equality for the LGBT community is continually fought for.

"It's really important to continue to stand up and fight for the entire community and not let them divide and conquer," he said.

The candidate also emphasized the importance of voting for Democrats and pro-LGBT candidates for congressional seats across the country in the November midterms, calling this election "ground zero for the fight for the future of our country."

Wahls' background already showcases his fight for LGBTs. He co-founded and is the executive director of Scouts for Equality, the national organization that led the campaign to successfully end the Boy Scouts of America's decades-old ban on gay people.

The longtime resident of the Senate district also shares his story growing up with LGBT parents in his book, "My Two Moms: Lessons of Love, Strength, and What Makes a Family."

Among Wahls' other platform stances are reversing Medicaid privatization, increasing funding for education, eliminating corporate tax cuts, and supporting a livable wage. He will face Carl Krambeck, a Libertarian, in the fall.