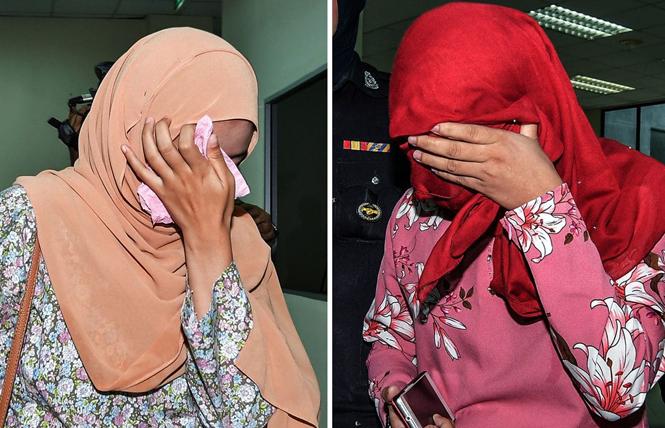 Two women were each caned six times after pleading guilty to homosexual activity at the Sharia High Court in the state of Terengganu, Malaysia, on Monday. Photo: EPA, via Shutterstock

LGBT and human rights activists around the world have denounced Malaysia for the September 3 caning of two lesbians under Sharia law.

On Monday morning, an estimated 100 onlookers watched as the two unidentified women, reported to be 22 and 32 years old, were struck six times each with a rattan cane in front of the Sharia High Court in Kuala Terengganu, the capital city of Terengganu.

It is the first time that women have been publicly punished for being caught in a consensual same-sex relationship, according to experts.

The women were also fined an equivalent of $800 each.

The caning had been delayed a week due to "technical difficulties," officials told reporters.

The women were caught attempting to have sex in a car in April. They were sentenced for having "sexual relations between women," known as musahaqah, and caned for sodomy, known as liwat, by the high court, which oversees religious and family matters in the Muslim-majority country.

Under the law, same-sex relationships between women are punishable by up to three years in prison.

The federal anti-sodomy law has been applied only seven times since 1938, according to Human Rights Watch. Four of those times were against former opposition political leader Anwar Ibrahim, who was accused, and served time, for alleged homosexuality.

Anwar was released from prison and pardoned by the king of Malaysia in May, which allows him to run for political office again. He has aligned himself with former opponent Mahathir Mohamad, now the prime minister. This potentially places him in a position to succeed Mahathir, reported the New York Times.

Anwar has remained silent regarding the women's punishment.

According to the Star newspaper, the older woman didn't wince at the blows. However, the younger woman began to sob when she was struck.

Representatives of the Terengganu government and Sharia law advocates told the Times that the two women were fully clothed when the caning occurred and the punishment wasn't meant to harm them. The purpose of the punishment was to serve as an example to others under Islamic law.

"The Sharia way of caning is not brutal and oppressive, as claimed by certain quarters," said Musa, reported the Times.

Representatives of the organizations all called for an end to corporal punishment in Malaysia, which has experienced an increase in attacks against its LGBT community and other groups in recent years.

"Caning is a form of torture, and to inflict this brutal punishment publicly on two people for engaging in consensual, same-sex relations sends Malaysia back to the Dark Ages," Gwen Lee, interim executive director for Amnesty International Malaysia, said in a statement Monday from the organization.

"Caning is a dreadful reminder of the depth of discrimination LGBTI people face in the country and a sign that the new government condones the use of inhumane and degrading punishments, much like its predecessor," Lee added.

Representatives of the Malaysian Bar stated that the country shouldn't tolerate caning and called for a repeal of all forms of corporal punishment.

"It is a harsh and barbaric form of punishment that causes harmful and long-lasting psychological effects and has no place in a modern and compassionate society such as ours," said George Varughese, the president of the legal association in a statement.

A crackdown on Malaysia's LGBT community has increased in the past two years. Recently, a gay bar in Kuala Lumpur, the country's capital city, was raided and an estimated 20 men were charged for "illicit behavior;" a transgender woman was brutally attacked in a city near the capital; and two portraits of LGBT activists were removed by authorities from a photography exhibit because it allegedly promoted homosexuality. Earlier this year, a Malaysian newspaper published a checklist of how to spot someone who is gay. The article received severe public backlash and criticism.

"We are seeing shrinking spaces in the new administration," LGBT activist Thilaga Sulathireh of Justice for Sisters told CNN. "Just in the past 100 days we've seen different types of restrictions on LGBT people. It's very concerning."

Manning barred from entering Australia, New Zealand
Transgender activist Chelsea Manning will not be allowed to go on a five-city speaking tour in Australia and New Zealand, a representative of her speaker's bureau announced August 30.

Manning, who ran unsuccessfully this year for the U.S. Senate against Democratic incumbent Benjamin L. Cardin in Maryland, was denied entry into the countries.

The former U.S. Army intelligence analyst was convicted of leaking military secrets to WikiLeaks and sentenced to 35 years in prison. Former President Barack Obama commuted her sentence shortly before he left office in 2017.

Manning was scheduled to begin her tour down under at the Sydney Opera House September 1, but a representative at Think Inc. said it received a notice of intention from the government to deny Manning entry, reported USA Today.

She was also scheduled to speak in Melbourne and Brisbane as well as Wellington and Auckland in New Zealand.

Think Inc. launched a petition for supporters to lobby David Coleman, the new immigration minister for Australia, to allow Manning to enter Australia.

"Ms. Manning offers formidable ideas and an insightful perspective, which we are hoping to bring to the forefront of Australian dialogue," Suzi Jamil, director of Think Inc., said in a statement from the organization September 3.

The Department of Home Affairs said, while it does not comment on individual cases, all non-citizens entering Australia must meet character requirements set out in the Migration Act, the Associated Press reported. The reasons a person might fail the character test include a criminal record or a determination they might be a risk to the community, according to the department.

The petition (https://www.change.org/p/david-coleman-let-chelsea-manning-visit-australia) had received nearly 20,000 signatures as of September 4.