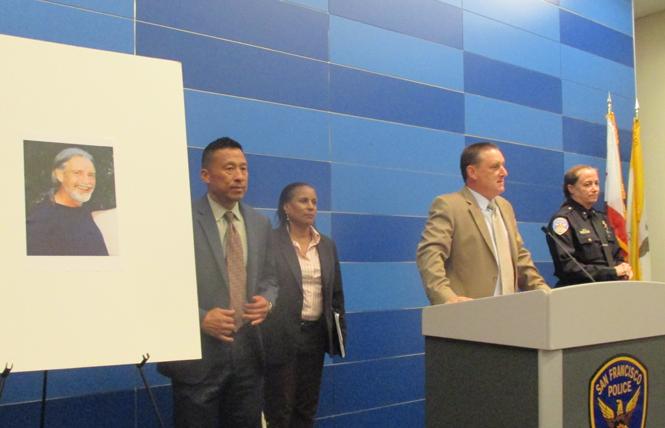 For 18 years, law enforcement has told the public, "If you see something, say something." But what if concerned friends and family of a missing gay man did see something - unusual activity at his home - and did say something - called police, filed a missing persons report - and nothing happened for months? Unfortunately, this appears to have occurred in the case of Brian Egg, 65, who is officially reported as missing. Subsequently, a headless torso was found in a fish tank in his South of Market home a couple of weeks ago. In fact, San Francisco police declined to return messages from our reporter for days, and only issued a bland statement to the media after the San Francisco Chronicle inquired about the case. After the Chronicle and Bay Area Reporter published articles about it last Tuesday, SFPD brass finally held a news conference and asked for help from the public. Here's the problem: for weeks the public had been contacting police and gossip about Egg's disappearance had been percolating on the social media site Nextdoor. Egg, a popular former bartender at the Stud, hasn't been seen since late May or June.

Police officials tried to defend their (in)action at the news conference. They cited three instances in which officers went to Egg's home, but since no one answered the door, they left. They cited his outgoing answering machine message as evidence that Egg was not in danger, even though his brother told the B.A.R. that Egg didn't have an answering machine. Investigations Bureau Commander Greg McEachern said that police weren't aware of that information. It is troubling that San Francisco police were apparently duped by an answering machine; after all, an outgoing message isn't proof someone is alive. Egg's brother told the B.A.R. that the man's voice on the machine wasn't even his brother's.

The police waited too long to enter his home. At this point, it's been almost four months since anyone has seen Egg, giving suspects ample opportunity to tamper with, or destroy, evidence. Two men were arrested in connection with Egg's disappearance, but were released when the San Francisco District Attorney's office dropped the charges, pending further investigation. Later, one of the men was detained in Alameda County on a parole violation. The DA's office demands overwhelming evidence to prosecute a case, but there appears to be little evidence and the torso is badly decomposed. The head and hands are missing.

Gay District 8 Supervisor Rafael Mandelman, the chair of the board's public safety committee, must hold a hearing about the mistakes made by police in this case and call department officials to testify. It appears that officers did not take Egg's friends' concerns seriously, and the supervisors need to know why that happened. Likewise, the Police Commission should question department officials about the obvious shortcomings that were revealed. A search warrant isn't required for police to do a wellness check if there is a reasonable suspicion that a person is deceased or in danger. We cannot fathom why they didn't use common sense and waited so long to enter Egg's home.

We also need to hear from police Chief William Scott and how he will institute changes so that similar mistakes are not repeated.

We hope that the SFPD did not give low priority to this case because Egg is a gay man. But it is disturbing that officers dropped the ball when neighbors begged the cops to keep checking. There are lots of LGBT seniors living alone in the city. Several years ago, the San Francisco LGBT Aging Policy Task Force issued its report that pointed to isolation and how that could pose a risk for LGBT seniors who live alone. It's important for LGBT seniors to have friends or social groups for their safety and well-being, yet, as we see in the Egg case, that wasn't enough to spur police to thoroughly check his home when neighbors became increasingly concerned.