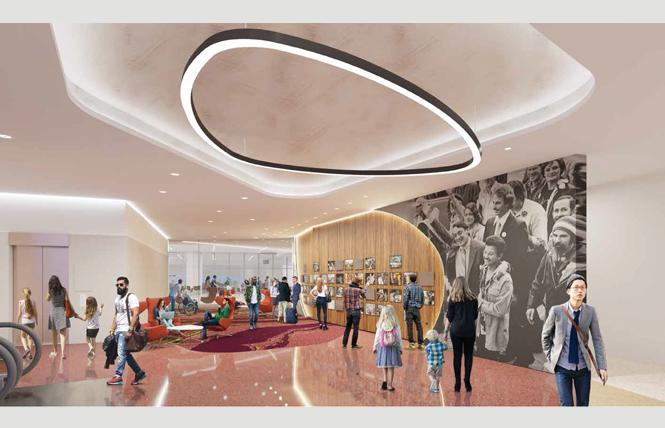 A rendering of the Central Inglenook in the new Terminal 1 shows a wall of photos of Harvey Milk, as well as larger images. Photo: Courtesy SFO

Officials at San Francisco International Airport are planning to mount a crowd-sourced exhibit about the late gay Supervisor Harvey Milk inside the terminal named in his honor.

It is just one of the elements the city's airport is planning for the under renovation Terminal 1, which was renamed Harvey B. Milk Terminal by the supervisors and former mayor Mark Farrell this spring. Also to be installed will be new signage and artwork throughout the terminal, as well as a temporary display on a construction wall in the terminal's Boarding Area B.

Next July, airport officials expect to unveil the temporary exhibit, which is slated to remain until May 2021. The permanent exhibit, signage, and several art pieces would be unveiled in February 2020, according to the airport's current timeline.

The last of the artwork featuring Milk would be unveiled in November 2022 when the full terminal is slated to open. The first of SFO's four terminals, Terminal 1 is undergoing a $2.4 billion remodel that is being rolled out in stages.

In 2013, gay former supervisor David Campos had proposed naming the entire airport after Milk. Due to a lack of support, Campos worked out a deal with the late mayor Ed Lee to instead name one of the airport's terminals in honor of Milk. An advisory panel last year selected Terminal 1 as the best choice, leading to city leaders approving the selection earlier this year.

According to the plans approved last month by the arts commissioners, the main display about Milk will be located in a pre-security area in Terminal 1 South. Located on the departures level, it will be housed in what the airport is calling the Central Inglenook.

The SFO Museum is working with photographer Daniel Nicoletta, a gay man and close friend of Milk's, to seek images of the gay icon from the public for the display. In its presentation to the arts commission, the airport said it was also looking for photographs from the 1960s through the 1980s that document not only Milk and his political campaigns, but also the city's LGBT community in the 1970s.

Those images will be "exhibited salon style on a wood-paneled wall," according to the airport, in the corner space at the bottom of a bank of escalators.

"On each side, the exhibition will feature floor-to-ceiling images of Milk on surrounding blackened-steel panels," states the design plan. "Interior photographs will be produced at approximately 13 1/4 x 20 inches and will?be displayed in a semi-random grid-based pattern, with historical and informational text placed throughout."

A third oversized image on blackened steel will be located around the corner from the exhibit inside the secure area of the airport so it is visible to arriving passengers. The photos submitted for the Harvey B. Milk Gallery will also be used for the temporary display to be installed on a construction wall running from Gate B1 to Gate B9.

The airport is also planning to install two large artworks honoring Milk. One would span the three-story atrium in the departures level, with the other placed curbside on the arrivals level. The individual artwork for each area is not yet selected, nor has the airport detailed what the exterior and interior signage for the Milk terminal will look like.

"The packet we presented only relates to art installations, which is why you see installation locations in which the artwork has yet to be selected," explained SFO spokesman Doug Yakel. "What's not included here is the overall terminal treatment ... exteriors, thresholds, etc."

The airport is planning to publicly unveil those aspects of the design for the Milk terminal sometime in October.