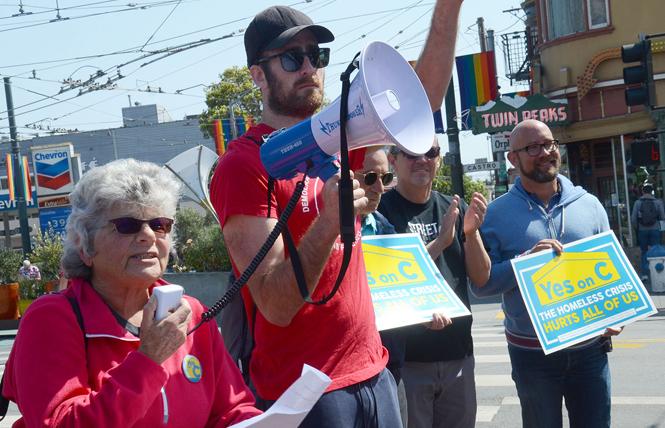 Seeking to galvanize support for Proposition C, which would raise taxes on big corporations in San Francisco to fund homeless services and supportive housing, about 100 people rallied and knocked on doors in the Castro last weekend.

If passed, Prop C will levy a half percent in gross receipts tax on corporate revenues over $50 million. According to supporters, if passed, Prop C will generate $300 million per year to help tackle the housing affordability and homelessness crisis. The money would, supporters say, create 4,000 affordable homes for low-income San Franciscans, fund 1,000 new shelter beds to move people off the street and indoors, fund mental health and substance abuse treatment, and add more public restrooms, jobs for people to help keep the city clean, and create thousands of rent subsidies to help people stay in their homes.

The coalition in support of Prop C has been named Our City, Our Home. Some attendees at the September 1 rally also expressed support for California Proposition 10, also on the November ballot, which would repeal the Costa-Hawkins Act that puts limits on how cities can implement rent control measures.

A number of organizations are taking part in the Yes on C campaign, including the Coalition on Homelessness, Q Foundation, Eviction Defense Collaborative, Democratic Socialists of America, League of Pissed Off Voters, Chinatown Community Development Center, and the Harvey Milk and Alice B. Toklas LGBT Democratic clubs, among others.

Also attending the rally was gay District 8 Supervisor Rafael Mandelman, who represents the Castro; gay former District 8 Supervisor Bevan Dufty, who's now on the BART board; lesbian former health commissioner Roma Guy; and gay former state Assemblyman Tom Ammiano.
"Homelessness is my top priority," Mandelman said. "The bottom line is that we do not have the housing and shelters we need to get very sick people off our streets. Proposition C is a once-in-a-lifetime opportunity to give us the resources to address this problem."

Mandelman noted that opponents feel that Prop C will drive businesses out of the city. "The real threat to economic activity are the terrible conditions in our public spaces," he said.

Jodi Schwartz, a queer woman who's executive director of the Lavender Youth Recreation and Information Center, noted that six out of every 10 young people who come through LYRIC's doors are homeless or unstably housed.

"As a society, we continue to fail in our responsibilities to provide a safe and loving community for queer and trans youth along their path to adulthood," Schwartz said. "The result is often homelessness. Forty-nine percent of San Francisco's homeless youth identify as LGBTQQ."

"Props C and 10 will give us permanent solutions to quality of life issues affecting all of us who live and move about in this great city by the bay," added gay longtime activist Ken Jones. "We can do better. We must do better. Props C and 10 begins to make full participation in San Francisco life, hope, and opportunity a reality for us all; and, not just for those who are with us now, but for all those who will walk these paths in the future."

After the rally the crowd dispersed to canvass the neighborhood, knocking on doors to urge people to vote in support of Prop C. There will also be joint phone banking co-organized by the Milk and Alice clubs.

"I'm thrilled that Alice and Milk have come together in unity to address the crisis," Gina Simi, a lesbian who co-chairs the Alice club, told the Bay Area Reporter. "We, as a city, are better than this and we must do better."

Honey Mahogany, a queer, gender-nonconforming co-president of the Milk club, also spoke to the B.A.R.

"There's no reason why we can't get this passed with more than 50 percent plus one of the vote," Mahogany said. "When we take care of the poorest, the sickest, the most vulnerable, everyone does better."

Cynthia Crews-Pollock, a queer woman, attended the rally and went out to canvass. "I am here because this is the first real chance San Francisco has to take care of our own and to prevent homelessness, to keep people housed, and to create a city that loves people back," Crews-Pollock said.

Brian Basinger, executive director of the Q Foundation, said that he was pleased with Saturday's turnout.

"Thirteen and a half percent of the HIV community is homeless," Basinger wrote in an email. "Twenty-one percent of the transgender community is homeless, 50 percent of homeless youth are LGBTQ. We can end homelessness in the trans, HIV, and LGBTQ youth communities. If we all pull together and demand change, we can pass Prop C to build more affordable housing accessible to the lowest income San Franciscans than has been built in the past 30 years."