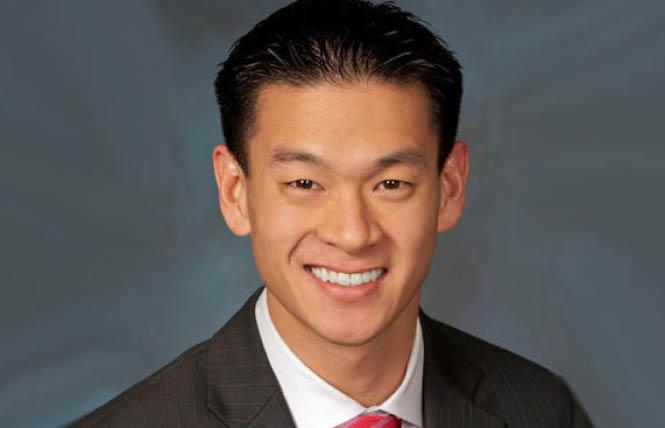 A bill that would have banned conversion therapy in California was shelved by its author Friday, who said that more work needs to be done on it.

Gay Assemblyman Evan Low (D-Campbell) said in a statement that, although Assembly Bill 2943 had passed both legislative houses, he would not be forwarding it to Governor Jerry Brown.

Conversion therapy is widely discredited by major medical groups, like the American Psychological Association, and attempts to change people's sexual orientation. Low's bill would have banned the practice for adults. In 2012, the state banned mental health professionals from performing conversion therapy on children under 18.

Low's bill would have designated paid "conversion therapy" services as a fraudulent business practice under the state's consumer protection law.

As the bipartisan bill moved through the Legislature this year, opponents, particularly religious leaders, began to speak out.

"I knew this was an emotionally charged issue, so I spent the last few months traveling up and down the state meeting with a wide variety of faith leaders," Low wrote.

"I was heartened by the conversations," Low stated. "A number of religious leaders denounced conversion therapy and recognized how harmful the practice is while acknowledging it has been discredited by the medical and psychological communities. I left those productive conversations feeling hopeful. I believe every person who attended these meetings left with a greater understanding for the underlying reason and intention of this bill to create a loving and inclusive environment for all. However, I believe there is still more to learn."

He said that he is "committed to continuing to work toward creating a policy that best protects and celebrates the identities of LGBT Californians and a model for the nation to look toward."

Opponents of legislation had campaigned against it all year, with some falsely claiming it would ban Bibles from religious schools. They also attacked it as a violation of free speech rights for counselors, therapists, and others.

In an email Friday Karen England, with the conservative Capitol Resource Group, thanked Low for "considering the repercussions of this bill" and pulling it.

"We opposed AB 2943 because it attacks conscience rights on two fronts: adults seeking to resolve unwanted feelings of sexuality and gender, and counselors, experts, authors and even religious leaders trying to help," wrote England. "We are grateful that this bill which threatened religious liberty and free speech has been pulled."

In his statement, Low talked about how the bill was personal for him.

"Authoring Assembly Bill 2943 is one of the most personal decisions I have made since taking office," he said. "As an elected official, I made decisions that discriminated against my very existence in order to support the broader community I represented. I officiated at weddings but, at the time, I could not legally have one of my own. I hosted blood drives but I was prohibited from participating due to the FDA's discriminatory ban on gay blood donors. I hosted Boy Scouts earning merit badges but as a child I was never able to earn my own.

"As a young person I often found myself confused about my sexual orientation," Low added. "It was hard to find any mainstream media surrounding the feelings I was having. Gay men were not depicted in movies or TV that I was exposed to. I hid myself and my feelings because I was afraid of what others would think of me. This left me feeling very lost, scared, alone, and even suicidal. I wondered if I could change. Coming out was not an easy experience. Yet, I am grateful my community embraced me as I was, a gay man. Many fellow members of the LGBT community are not as fortunate and do not have the support I did and have been subjected to the harmful and fraudulent practice of conversion therapy."

Equality California, the statewide LGBT advocacy organization, vowed to work with Low in the coming months to craft a better piece of legislation. Advocates of the bill will also need to work with the administration of Gavin Newsom, the state's current lieutenant governor who is widely expected to succeed Brown as governor next year.

"This is an important issue, and one that we're committed to getting right," stated EQCA Executive Director Rick Zbur. "We look forward to working with Assembly member Low to continue this conversation with Californians across the state and leaders from the medical, mental health, civil rights and faith communities. In the meantime, California's existing consumer protection laws continue to safeguard the LGBTQ community against these dangerous, discredited, and fraudulent practices."

Shannon Minter, legal director for the National Center for Lesbian Rights, also a supporter of the bill, issued a statement: "Evan Low is a champion for LGBT people whose lives have been devastated by the fraudulent practice of conversion therapy. His leadership has sent a clear message to the charlatans who exploit vulnerable consumers based on false claims that therapy can change a person's sexual orientation or gender identity. We are grateful for his tireless efforts to ensure that every Californian understands that these practices are fraudulent and that those who engage in them for money are violating California law."

The Trevor Project, the leading national organization providing crisis intervention and suicide prevention services for LGBTQ youth and a co-sponsor of AB 2943, also issued a statement.

"As the Trevor Project continues to hear from conversion therapy survivors in California who use our suicide prevention and crisis services, we applaud Assembly member Evan Low for his longstanding efforts to protect LGBTQ youth from the discredited practice," said Casey Pick, senior fellow for advocacy and government affairs. "Year after year, Low introduces legislation like AB 2943 that saves thousands of young LGBTQ lives, a guiding principle we strongly support at the Trevor Project as we work to end suicide among LGBTQ youth."