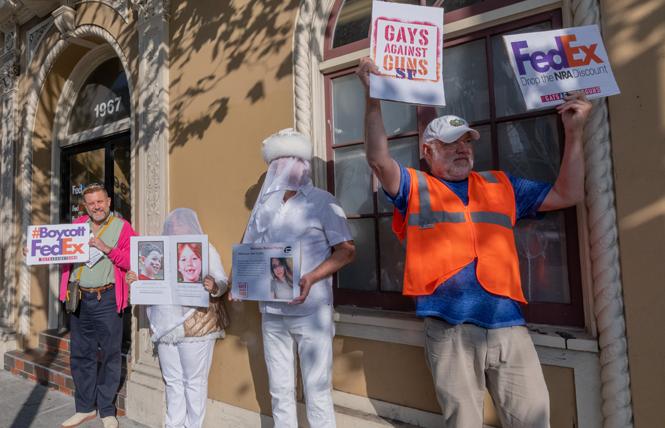 The Reverends Michael Cronin, left, and Annie Steinberg-Behrman, from Metropolitan Community Church-San Francisco, joined with other protesters at a Gays Against Guns rally outside a FedEx store August 26 to protest the shipping company's discount to National Rifle Association members. Photo: Jane Philomen Cleland

On the day that a young man opened fire at a video gaming tournament in Jacksonville, Florida, killing two people and himself, a small group of gay and allied protesters gathered outside a FedEx store in San Francisco to protest the shipping company's discount to members of the National Rifle Association.

A half-dozen protesters from Gays Against Guns' San Francisco chapter gathered in front of the FedEx store at 1967 Market Street Sunday, August 26, to protest the company's policy of offering a 26 percent discount to NRA members. Gays Against Guns is a national LGBT group that is fighting for what they call sensible gun legislation.

According to a news release, Gays Against Guns is a "direct action group with mostly, but not all, LGBT members that formed after the June 2016 mass shooting at the gay Pulse nightclub in Orlando, Florida."

The group takes part in non-violent protest and civil disobedience against what it calls the "chain of death" causing America's gun violence epidemic: gun makers and their investors, and the NRA and politicians the gun advocacy group supports in the Capitol and state legislatures.

The Reverend Michael Cronin, 55, is a gay man and coordinating member of GAG. He's also an associate pastor at Metropolitan Community Church-San Francisco.

"Pulse happened on June 12, 2016," Cronin said. "There are a lot of us in the MCC congregation that were very upset at the event. We heard about Gays Against Guns after Pride that year and wanted to start a local chapter in San Francisco. Our goals are to help bring about sensible gun reform, thereby reducing gun violence."

Cronin pointed out that according to Business Insider, which obtained its information from the nonprofit Gun Violence Archive, there were 154 mass shootings in 2018 in the United States as of June 28.

"I grew up not having to worry about this issue," said Cronin. "It seems insane that children have to prepare for lockdown drills and that teachers are being requested to carry guns."

Protesters stood in front of the FedEx store wearing white veils. Each demonstrator carried a large sign that featured a photograph of shooting victims from the Pulse and 2012 Sandy Hook massacres. On December 14, 2012, Adam Lanza, 20, fatally shot 20 children and six staff members at the Sandy Hook Elementary School in Newtown, Connecticut.

One of the signs paid tribute to 25-year-old Pulse victim Amanda Alvear, a nursing student at the University of Florida. Alvear was at Pulse with her friend, Mercedez Flores, 26, who was also killed. Alvear's Snapchat captured the sounds of shots ringing out and some of the first images to emerge from the massacre.

Also remembered during the protest was Brenda McCool, 49, who was dancing at Pulse with her gay son. The sign noted that McCool had beat cancer twice.

The protesters gave handouts to passersby urging them to boycott FedEx until the company breaks its ties with the NRA. Most people politely accepted the handouts, with some expressing support. There were also a number of cars that honked support as they drove by.

"I'm here because I hate that schoolchildren live in fear and have to take time out of their learning to practice drills in case of a shooting," said protester the Reverend Annie Steinberg-Behrman, a 61-year-old lesbian who's the senior pastor at MCC-SF. "I have a 7-year-old granddaughter and I do this for her."

Alan Martinez, a 63-year-old queer man, said that he had a personal reason for attending the protest - his nephew, Christopher Michaels-Martinez, was murdered in the 2014 Isla Vista shooting near UC Santa Barbara.

"It devastated my family," Martinez said. "You think it can't happen to you but it does. My sister-in-law lost her mother a few months later so she lost her only son and her mother in the same year. My brother quit his job and now works for Everytown For Gun Safety. He's helping to train and get other survivor families involved in local politics. The federal government is worthless, but a lot is happening at the state level."

The Bay Area Reporter asked the FedEx store manager for a comment. He declined and did not give his name, though he did provide the phone number for the FedEx media relations office.

"We believe that gun safety and protecting our communities and schools is a critical issue for our nation," the statement read. "FedEx was one of the first major corporations to make our position clear in support of common sense measures such as the prohibition of assault weapons and large capacity ammunition magazines for non-military use, enhanced background checks, significant increases in safety measures and technology to protect children and teachers in schools."

The statement further reads that FedEx is not a member or sponsor of the NRA.

Cronin said that the protests will continue on the 26th of each month at locations to be determined. The 26th was chosen because of the 26 percent discount that FedEx offers to NRA members. For information on future protests, join Gays Against Guns SF's Facebook page at https://www.facebook.com/gaysagainstgunsSF/?ref=br_rs.

Gays Against Guns SF meets on the second and fourth Thursdays of each month at 6 p.m. at MCC-SF, 1300 Polk Street.