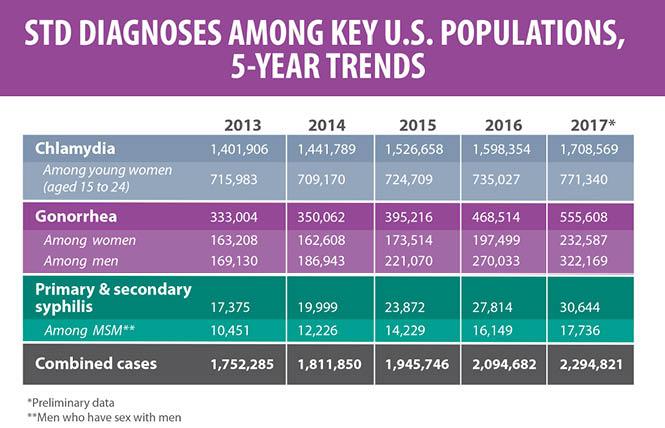 Federal health officials are warning that the country is "sliding backward" in its fight to stop the spread of sexually transmitted diseases. National rates of chlamydia, gonorrhea, and syphilis all increased in 2017, and concern continues to grow that gonorrhea will become resistant to the lone drug used in the U.S. to treat it.

At a news conference Tuesday (August 28) in Washington, D.C., the Centers for Disease Control and Prevention reported that nearly 2.3 million cases of chlamydia, gonorrhea, and syphilis were diagnosed in the United States in 2017, according to preliminary data. The number surpassed the previous record set in 2016 by more than 200,000 cases and marked the fourth consecutive year of sharp increases in the STDs.

"We are sliding backward," stated Dr. Jonathan Mermin, director of the CDC's National Center for HIV/AIDS, Viral Hepatitis, STD, and TB Prevention. "It is evident the systems that identify, treat, and ultimately prevent STDs are strained to near-breaking point."

The CDC also reported it is concerned with the increases in diagnoses among women and the speed at which they have increased. Such cases have gone up three years in a row, from 197,499 to 232,587.

As for chlamydia, it remained the most common condition reported to federal health officials. More than 1.7 million cases were diagnosed in 2017, with 45 percent among 15- to 24-year-old females, according to the CDC.

Health officials stressed that chlamydia, gonorrhea, and syphilis are all curable with antibiotics. Yet most of the cases go undiagnosed and untreated, which can lead to severe adverse health effects that include infertility, ectopic pregnancy, stillbirth in infants, and increased HIV risk.

According to the CDC, a range of factors may be contributing to STD increases, with studies pointing to drug use and socioeconomic factors like poverty, stigma, and discrimination. For more than a decade STDs have been on the rise in San Francisco, with preliminary data for 2018 from the Department of Public Health showing the number of cases of chlamydia, gonorrhea, and syphilis all continuing to outpace those seen in 2017.

"These increases are not going to be new news to us in San Francisco," said Deputy Health Officer Dr. Susan Philip, the director of the disease prevention and control branch in the health department's Population Health Division.

The latest data from the CDC, presented during the 2018 STD Prevention Conference, puts into context that what San Francisco has experienced since 2007 is now being seen throughout California and across the country, said Philip, who is attending the conference.

"Unfortunately, San Francisco is in good company," she said in a phone interview with the Bay Area Reporter. "A lot of jurisdictions across the country are trying to address the same increase in STDs."

Alarm grows over gonorrhea treatment
Of particular concern to federal health officials is the persistent threat of untreatable gonorrhea in the United States. The CDC noted that there continue to be reports of antibiotic resistant gonorrhea abroad, though no such case has yet been found in the U.S.

In 2015, the CDC changed its treatment recommendations and advised health care providers to prescribe a single shot of ceftriaxone accompanied by an oral dose of azithromycin to people diagnosed with gonorrhea. Azithromycin was added to help delay the development of resistance to ceftriaxone, explained the agency.

Emerging resistance to ceftriaxone has not been seen since the dual therapy approach was implemented, the CDC noted, and there has not yet been a confirmed treatment failure in the United States when using this recommended therapy.

The agency said that the finding adds to the concerns that azithromycin-resistant genes in some gonorrhea could crossover into strains of gonorrhea with reduced susceptibility to ceftriaxone. The fear is that a strain of gonorrhea may someday surface that does not respond to ceftriaxone.

"We expect gonorrhea will eventually wear down our last highly effective antibiotic, and additional treatment options are urgently needed," stated Dr. Gail Bolan, director of the CDC's Division of STD Prevention. "We can't let our defenses down - we must continue reinforcing efforts to rapidly detect and prevent resistance as long as possible."