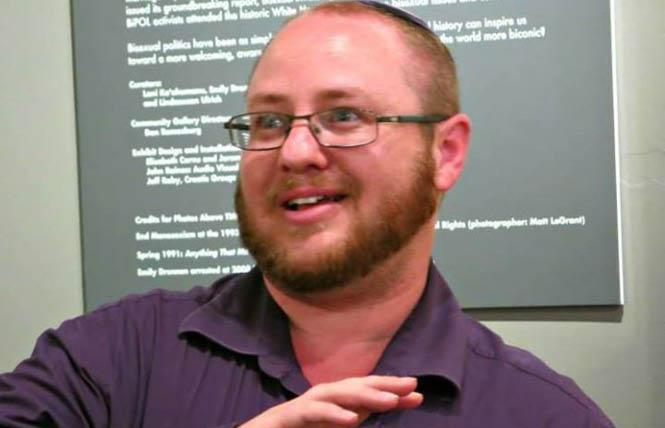 San Francisco school board candidate Martin Rawlings-Fein was unsuccessful in securing an endorsement from the San Francisco Democratic Party, as were the other four out candidates in the race.

None of the five out candidates seeking seats in November on the San Francisco school board received the local Democratic Party's endorsement.

There are three open school board seats this year as incumbents Shamann Walton and Hydra Mendoza-McDonnell did not seek re-election and Emily Murase, Ph.D., failed to file her required paperwork in time to qualify for the ballot.

The only LGBT school board candidate to receive any support from DCCC members was Phil Kim, a gay man and charter school employee who in 2016 lost his first bid for a seat on the oversight body for the San Francisco Unified School District. Gay state Senator Scott Wiener (D-San Francisco) gave one of his three votes to Kim.

The four other out candidates garnered no votes from DCCC members. They include transgender candidates Mia Satya and Martin Rawlings-Fein, who would be the first elected transgender public officials in the city, gay educator Connor Krone, and lesbian firefighter Lenette Thompson.

In an email to its members last Friday, the Harvey Milk LGBTQ Democratic Club criticized the DCCC members for their endorsement votes in the school board race. The progressive political club was particularly rankled by the lack of support for the two transgender candidates when Josephine Zhao received a vote each from Wiener, former party chair Mary Jung, and Board of Equalization member Fiona Ma.

The Milk club is opposing Zhao due to her past comments against transgender rights, which she now disavows, and has targeted her endorsers in recent weeks.

The club's email noted that, while Zhao garnered three votes from DCCC members, "no transgender candidates for Board of Education got one single vote. Let that sink in for a minute."

Yet the email failed to mention that the club's current Co-President Honey Mahogany, a local drag queen whose given name is Alpha Mulugeta, is a DCCC member and did not vote for either Satya or Rawlings-Fein. Also unmentioned by the club was that Peter Gallotta, another DCCC member who is a former Milk club president, did not vote for the trans candidates.

They both voted for the trio of candidates endorsed by the party, as did most of the progressive DCCC members, including gay party Chair David Campos, a former supervisor who had served as chief attorney for the school district. As for the Milk club, it early endorsed Satya and last week endorsed Collins and Gabriela Lopez.

At its meeting last Tuesday Milk club members also approved a request that they vote on rescinding its endorsement of Ma in her bid this November for state treasurer due to her endorsement of Zhao. The club will vote on the motion at its September meeting.

Ma's campaign did not respond to the Bay Area Reporter's request for comment last week.

The Milk club had also urged the DCCC members not to endorse Carmen Chu in her bid to be re-elected the city's assessor-recorder due to her endorsement of Zhao. Chu easily secured the local party's support in the race, with the only DCCC members voting not to endorse her Mahogany, Gallotta, and Alysabeth Alexander, who is bisexual and a local labor leader and community housing advocate.

For on that day the LGBTQ Victory Fund endorsed Dumanis, a lesbian who was San Diego's former district attorney, in her bid for the District 4 seat on the San Diego County Board of Supervisors. She is running against former Republican turned Democrat Nathan Fletcher, and if elected come November, would be the only LGBT person on the county board.

The Victory Fund announced a total of 36 endorsements of LGBT candidates across the country on August 21, including a number in California. The national organization, which is dedicated to electing LGBTQ leaders to public office, noted that its list of endorsed LGBTQ candidates this election cycle now numbers 218. It is a record number for the 27-year-old group.

"A rainbow wave is coming in November - with more LGBTQ candidates positioned to win historic races and high-level offices than at any other time in American history," stated Annise Parker, a lesbian who is Victory's president and CEO and a former mayor of Houston.
In the Bay Area, the Victory Fund endorsed two out candidates who will automatically be appointed to public office later this year because no one else filed to run in their races for open education posts.

James Aguilar, 18, a gay incoming freshman at San Francisco State University, was the only candidate to file for the Area 6 seat on the San Leandro Unified School District Governing Board. (In fact, none of the school board seats up for grabs in November were contested.)

"This isn't the end of our campaign, however! I will be working with other amazing candidates, one especially in the race for mayor, to see our progressive visions for San Leandro through," wrote Aguilar in an August 16 Facebook post a day after the filing deadline for the race had closed.

He will be sworn into office December 11. Around the same time Adam Spickler will be sworn into the Area II seat on the Cabrillo Community College Board of Trustees in Santa Cruz County. He will become the first transgender man to hold public office in California.

No one else filed to run for the college board seat after the incumbent opted not to seek re-election. Like Aguilar, Spickler had sought the Victory Fund endorsement prior to becoming the trustee-elect and secured it last week.

Three out incumbents seeking re-election in California picked up the Victory Fund's endorsement. In the Bay Area the organization is supporting James Chang, a gay man on the Berkeley Rent Stabilization Board, and gay El Cerrito City Councilman Gabriel Quinto, currently the city's mayor.

It also endorsed Miles Prince, a gay man on the San Gabriel Valley Municipal Water District. He lives in Sierra Madre with his husband and their son.

Also on the endorsement list were gay city council candidates Shawn Kumagai in Dublin, Tyller Williamson in Monterey, and Jordan Brandman in Anaheim.

As the B.A.R. has previously noted, Kumagai would be the first out person to serve on the Dublin City Council and be the only LGBT elected person in the East Bay's Tri-Valley area.

"As a graduate of the Victory Institute I'm so excited to carry the torch for our LGBT community and advance equality in all it's forms at City Hall," stated Kumagai, referring to a training program the group holds for LGBT people interested in seeking public office.

While Kumagai and Williamson are seeking council seats for the first time, Brandman previously served on the Anaheim City Council. He was seen as closely allied with the interests of the Disneyland Resort and opposed having council members be elected by district. Despite the entertainment company's support, Brandman lost his bid for the newly created District 2 council seat in 2016 and is again seeking the position.

The full list of the Victory Fund's 2018 LGBTQ endorsed candidates can be seen at www.victoryfund.org/ourcandidates.

Due to the Labor Day holiday, the Political Notes column will return Monday, September 10.