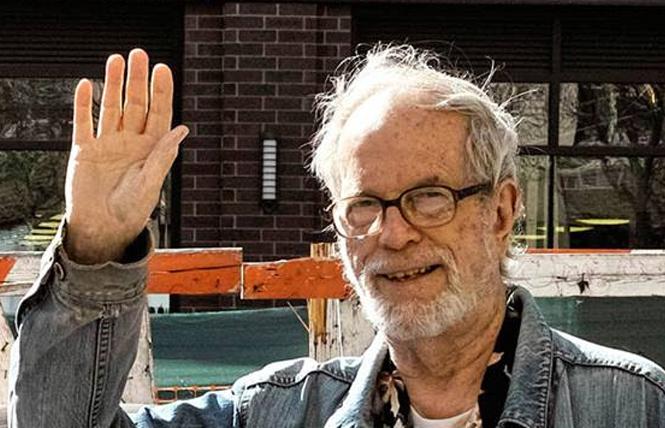 Mr. McReynolds died in the hospital after falling at his home, according to friends. He was 88.

"David McReynolds led an extraordinary life of principled opposition and organizing for decades," gay longtime social justice activist Bill Dobbs told the Bay Area Reporter. "He waged a helluva fight against war and greed. At turns a gentle pacifist and irascible, McReynolds made a mark with a lifetime of principled activism for a humane world."

Mr. McReynolds was born October 25, 1929 in Los Angeles and raised in a Baptist family. In his teens, he was a member of the Prohibition Party.

In the early 1950s, Mr. McReynolds became part of a radical bohemian circle at UCLA, where he studied political science. It was there that he met his first boyfriend, Alvin Ailey, who would later become a noted dancer and choreographer, in a campus bathroom. Mr. McReynolds later recalled that Ailey was the first person he had met who wasn't ashamed about being gay.

Mr. McReynolds joined the Socialist Party in 1951. In the mid-1950s he moved to New York City, where he worked on the editorial staff of Liberation magazine. He was a member of the staff of the War Resisters League from 1960 until his retirement in 1999.

Mr. McReynolds was best known for his antiwar activism, starting with draft resistance during the Korean War. With Catholic Worker activist Dorothy Day, he protested mandatory civil defense drills, refusing to take shelter as directed. In November 1965 he participated in one of the first public draft card burnings in New York's Union Square. Unlike his fellow activists, he avoided arrest because he was then too old for the draft.

Mr. McReynolds traveled widely over the years. He visited Hanoi and Saigon during the Vietnam War, was in Prague during the Soviet invasion to quash reforms in 1968, helped organize protests that ended in a violent crackdown outside the 1968 Democratic National Convention in Chicago, and visited Iraq in the lead-up to the Gulf War.

Mr. McReynolds ran for congressional office in New York in 1958 and 1968, and campaigned for president on the Socialist Party USA ticket twice, in 1980 and 2000.

"I'm trying to present the concept of socialism, put it back in the American dialogue. I think it has a right to be in," he told Amy Goodman on Democracy Now during the 2000 campaign. "I'm tired of hearing we're anti-imperialist, anti-racist, and so on, and not know what we're for. And I am for democratic socialism, an idea as old as 1901, when the party was founded. It goes back to the last century. ... It's not rooted in Moscow or Lenin."

Mr. McReynolds would later run for Senate on the Green Party ticket in 2004 against New York Democrat Chuck Schumer.

Addressing Schumer's opposition to same sex-marriage, Mr. McReynolds quipped, "I don't understand why gays and lesbians shouldn't suffer from the same angst, anxiety, tribulations and trials of marriage which, you know, heterosexuals have to go through. Why should we be exempt from these problems?"

Although he acknowledged that he was gay and was friends with gay luminaries such as Allen Ginsberg, Quentin Crisp, and Bayard Rustin, Mr. McReynolds appeared conflicted about his gay identity. He eschewed identity politics, had no interest in gay culture, and had little involvement in gay movement activism.

"I don't think homosexuality is 'normal' any more than I think my brown eyes are 'normal' or my height of 6' 3" is 'normal.' Normal is a matter of a norm within a society. Natural is another matter altogether," he wrote in a 2008 issue of New Politics devoted to the gay movement and the left. "I believe the curve of nature is to reproduce, and for this purpose, a good bit of heterosexuality is essential. But in the whole of the animal kingdom there is always, also, a remarkable display of homosexuality. It ain't the norm, but it is very natural."

"Long before Stonewall, way back in 1949, David carved out a gay life and later broke ground as an openly gay presidential candidate," Dobbs said. "As an out gay man, McReynolds was active, and often in the lead on many important matters. GLBT issues, however, were not a priority for him and at times he was ambivalent or even confounded by community concerns."

Longtime friend Steve Ault told the B.A.R. that Mr. McReynolds recalled that during the Stonewall riots in June 1969, he and his East Village buddies Ginsberg and Dave Van Ronk decided to check things out. Unlike Mr. McReynolds and Ginsberg, Van Ronk - the only one who was not gay - joined in the melee and was arrested.

Mr. McReynolds was an author and an avid photographer of people and nature. His worked appeared in many movement publications, the Village Voice, and a book of essays entitled "We Have Been Invaded by the 21st Century" (1970). In 2011, gay historian Martin Duberman wrote a joint biography of Mr. McReynolds and lesbian activist Barbara Deming, aiming to demonstrate that some prominent 20th century social movement activists were gay.

At a book party for the biography, Mr. McReynolds said, "First, do not be dismayed that we are in such troubled times. Large numbers of Americans seem impressed by Sarah Palin, Glenn Beck, or Donald Trump. ... Even in defeat we are victorious, for we have given our lives a meaning others should envy. In struggling for something greater than ourselves, we will be transformed."

Mr. McReynolds frequently held salons for friends and comrades at his East Village apartment, which was filled with exotic bromeliads, perfume vials, and pet cats. Despite his age, he embraced new technology and was an avid email correspondent and social media user.

"I didn't always agree with everything he said, but he was always principled. He spoke both from the heart and the head," lifelong peace and justice organizer Leslie Cagan told the B.A.R. "There are a lot of people who do a lot of work over the years, but the term 'long-distance runner' really applied to David. Even as he got older and it was harder for him to get around, he was always attentive to what was going on in the world. Even as his on-the-street activism had to slow down, he was always present."

Mr. McReynolds is survived by his brother, Martin McReynolds, and sister, Elizabeth Gralewski. A memorial is currently being planned, according to friends.