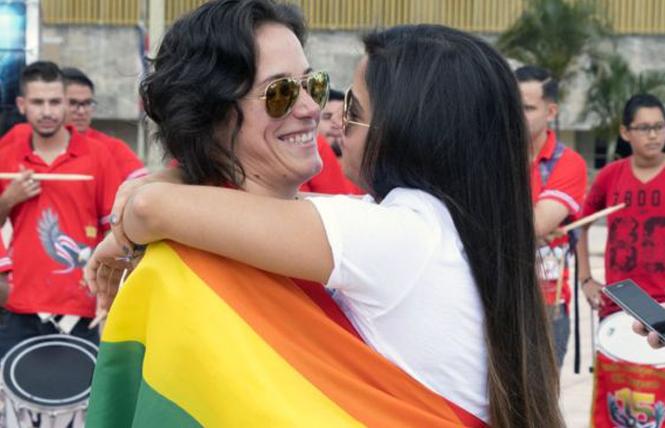 Supreme Court Judge Fernando Castillo gave Costa Rican lawmakers 18 months to pass a same-sex marriage bill. If not, same-sex marriage will become legal by 2020 if no action is taken, he told reporters at a news conference announcing the ruling.

If lawmakers pass a same-sex marriage law, the country will become the first in Central America to recognize marriage equality.

Enrique Sanchez, the country's first openly gay legislator, doesn't believe the Assembly will make the deadline to pass a bill because nearly a quarter of the legislative body is made up of evangelical Christians, he told Agence France-Presse.

Of the body's 57 seats, 14 are held by evangelical members, reported the BBC.

"What I see happening is that the [ban] will simply be declared unconstitutional in 18 months' time," Sanchez told Germany's Deutsche Welle, reported Hornet.

Sanchez is a member of the Citizens' Action Party led by Alvarado, who came into power earlier this year after a tense runoff election that pitted the novelist against conservative evangelical singer Fabricio Alvarado Muñoz.

The runoff campaign was dominated by the Organization of the Americas Court's advisory opinion in January that ordered any country signed onto the American Convention on Human Rights must recognize same-sex marriage, or, at minimum, rights associated with marriage equality.

Costa Rica is one of the signatory countries.

Alvarado won the election on a pro-LGBT platform April 1.

Alvarado, along with former and current politicians and Costa Rican LGBT activists, welcomed the court's ruling. However, they are aware that there's still a battle ahead of them.

"We continue to deploy actions that guarantee no person will face discrimination for their sexual orientation or gender identity, and that the state's protection will be given to all families under equal conditions," Alvarado tweeted after the ruling.

Marco Castillo is a lawyer and head of the LGBT rights group Diversity Movement.

"We know it's going to be an 18-month struggle, but the battle is already won," Castillo told the Thomason Reuters Foundation, reported the Huffington Post. "It's going to end with an equal marriage in Costa Rica."

Aside from the conservative makeup of the country's legislature, a report by the Pew Research Center found that more than 60 percent of Costa Ricans oppose same-sex marriage, reported Hornet.

LGBT rights, including same-sex marriage, are opposed by the Roman Catholic Church and evangelical groups in the country.

In January, parents opposing what they called the "gender ideology" being taught in sex education classes blocked entrances to a dozen elementary schools and kept their children home in protest.

Bachelet was the South American country's first female and pro-LGBT president. She was selected for the new post by U.N. Secretary-General Antonio Guterres to replace Jordanian diplomat Zeid Ra'ad al-Hussein.

Al-Hussein will step down from the position at the end of August after a four-year term.

In a tweet, Guterres praised the U.N. General Assembly's approval of Bachelet to the position, calling her a "pioneer, a visionary, a woman of principle, and a great human rights leader for these troubled times."

Her predecessor, al-Hussein, was outspoken and regularly criticized President Donald Trump's policies and administration. France 24 reported that most recently, he spoke out regarding undocumented immigrant families illegally crossing the border where children were separated from their parents.

Experts speculated that Bachelet won't shy away from difficult issues either. During her presidency she pushed for women's rights, LGBT rights, and progressive economic and tax laws.

First, he told France 24, Bachelet is the second-ever head of state to sit in the position. She has experience dealing with other heads of state around the world.

"This means she already has personal experience of meeting heads of state, she is used to sitting at the top table," he said, stating that she won't easily be pushed off to "lowly junior representatives," as some of her predecessors have been.

"She can demand a meeting with a president and her reputation means she will get it," Hongju Koh said.

Second, she has experience at the U.N., having spent several years as the head of the U.N. Entity for Gender Equality and the Empowerment of Women, also known as U.N. Women.

"She has already worked out how to manage the bureaucracy and to maintain her reputation," he said.

Bachelet's reputation was slightly blemished by a corruption scandal, since dismissed, that involved her son in 2015, but it hasn't affected her political career. Her son, Sebastian Davalos, stepped down from his position as head of a government charity and publicly apologized to the people of Chile and his mother.

Uncertainty for Chile's LGBT community
Her appointment comes at a time when Chile's LGBT activists have questioned the country's current president, Sebastián Piñera, about his commitment to LGBT rights.

Piñera, a right-wing leader who previously served as president from 2010-2014, supported LGBT rights during his first term. However, in this second stint his platform opposes LGBT rights, especially same-sex marriage and rights for transgender children.

However, he displayed a shift in opinion after "A Fantastic Woman" won the Oscar this year for best foreign language film. The movie stars Chilean transgender actress Daniela Vega.

The bill, presented by Piñera in May, was reviewed by both houses of the Chilean Congress, which approved a provision that minors under 14 can request to change their gender with parental consent and ratification before a Family Court. The bill also includes anti-discrimination based on gender identity and self-determination clauses, allowing transgender individuals not to have to undergo surgery to legally change their gender.

It is now up to both chambers to ratify the provision or agree on a new strategy regarding transgender minors' access to the rights included in the bill, reported the Washington Blade.

The bill will be sent to Piñera's desk for his signature after the final vote. Piñera will have 30 days to veto or approve the bill.

Piñera also must deal with other unfinished LGBT business from Bachelet's administration. He will have to ensure compliance of an agreement signed by Chile with the Movement for Homosexual Integration and Liberation. The agreement, mediated by the Inter-American Commission of Human Rights, regards same-sex marriage and adoption rights.

"The agreement contains a series of demands that have to be accomplished by the state in order to avoid an international lawsuit against Chile," Óscar Rementería, spokesman for the Movement for Homosexual Integration and Liberation, told the Blade.

Others believe that there is going to be a freeze on LGBT rights under Piñera's administration.

"There is consensus that there will be a 'freezing' of our rights during the next four years," Erika Montecinos of Agrupacion Rompiendo el Silencio, a Chilean lesbian advocacy group, told the paper.

IACHR applauded Bachelet's appointment to the U.N. and pledges its full support.

"Michelle Bachelet was a victim of human rights violations during the Chilean dictatorship, and in her professional and personal life she has demonstrated an unrestricted commitment to the defense of human rights," said IACHR Commissioner Margarette Macaulay in an August 9 news release from the organization.

"We applaud and celebrate this nomination of a Latin American woman for such an important position and wish her every success in her tenure," she added.

"Michelle Bachelet will take office in a challenging international political context, with anti-rights movements trying to undermine and reverse the progress made in recent years, and with serious challenges to ensure adequate funding for international bodies in general, and human rights bodies in particular," said Arosemena de Troitiño. "Michelle Bachelet will have our full support in order to advance in the protection and promotion of human rights for all people, without discrimination."

IACHR is a principal, autonomous body of the Organization of American States.