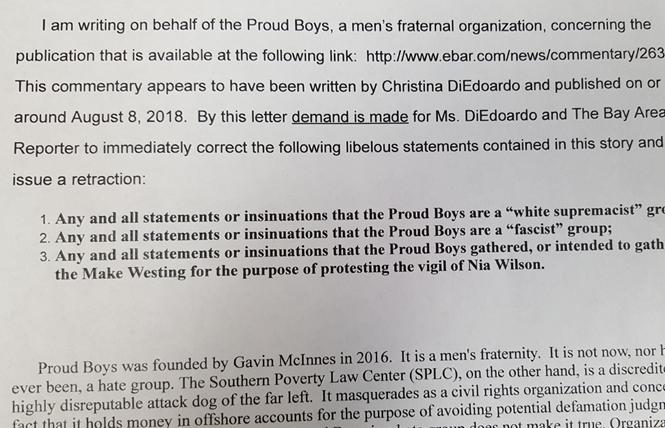 The Proud Boys, an international, far-right male fraternity, threatened the Bay Area Reporter with legal action last week after an August 9 opinion column was published describing the group as "white supremacists" and "fascists."

The Proud Boys' website describes its members as "Western chauvinists who refuse to apologize for creating the modern world," and that they long for days when, "girls were girls and men were men." It denies being an alt-right group and says it welcomes all races.

The B.A.R.'s Resist column, "Proud Boys not welcome in Oakland," by Christina A. DiEdoardo, recounted a July 23 protest objecting to an announced meet-up of a Bay Area chapter of the Proud Boys at Make Westing, a bar at 1741 Telegraph Avenue in Oakland.

The protest was held after a vigil for Nia Wilson at the MacArthur BART station the same night. Wilson, an 18-year-old African-American woman, was allegedly killed by a white man at MacArthur station July 22. Many who attended Wilson's vigil also marched to Make Westing to protest the Proud Boys.

B.A.R. publisher Michael Yamashita said the column was clearly labeled commentary and that it was not a news article. The words are DiEdoardo's opinion he said, and that he did not see any bias or violation on her part.

"It smacks of press intimidation without any real knowledge of how the press operates in relation to news articles, commentaries, columnists, and reporters," Yamashita said. "They each have different parameters and guidelines that they have to abide. If anything, this is a misunderstanding on [Van Dyke's] part about what constitutes libel and what was actually said in the column."

In a cease and desist demand letter emailed to the B.A.R. August 10, a day after the column was published, Proud Boys' representative Jason Van Dyke, an attorney in Texas, denied that the group of men who met at Make Westing were Proud Boys.

"We determined that the rumor of a Proud Boy meet-up at Make Westing was an internet hoax that originated on Twitter and 4Chan," Van Dyke wrote in the letter. "No meet-up of our Bay Area chapter was ever planned at that establishment or at that time."

In an interview with the B.A.R. this week, Van Dyke said he called the president of the Bay Area chapter of the Proud Boys and he confirmed the Proud Boys never intended or announced they planned to meet at Make Westing.

Though it is not confirmed if the six white men who attempted to enter the bar were members of the Proud Boys, DiEdoardo said that at the protest, the men didn't deny being a part of the group even after protesters were yelling, "Get the fuck out."

"When the five or six jokers tried to run our lines, the crowd called them out as Proud Boys and they didn't deny it, claim they were somebody else, etc, - they just grinned and tried to force their way through," DiEdoardo wrote in an email.

As well, Make Westing posted on its Facebook page July 20 that the Proud Boys announced their intention to gather at the bar July 23.

"The Proud Boys, a group of white racist nationalists notorious for violent confrontations across the country, including the terrible events in Charlottesville, have decided to throw a meet-up in our city," the post said. "[The Proud Boys] declared an intention to host their event at Make Westing, an establishment whose values stand in direct opposition to this Alt-Right group."

The Facebook post also called for a "Pro-Oakland Movement," a gathering of residents and organizations to "take a stand in Love and against hate," on July 23 at the bar.

On Twitter, Oakland Mayor Libby Schaaf also responded to the possible Proud Boys' appearance saying, "We refuse to be intimidated and will not back down or stand by quietly as racist hate groups threaten violence and bring messages of hate to our neighbors."

In the email sent to the B.A.R., Van Dyke asked for the retraction of the use of the words "white supremacists" and "fascists" that were used to describe their group. Van Dyke also claims the column insinuates that the Proud Boys gathered, or intended to gather, for the purpose of protesting the vigil of Wilson. However, the column states that the Proud Boys' meeting was planned before the Wilson vigil was announced.

During the interview, Van Dyke vehemently denied that the Proud Boys are white supremacists.

"We certainly respect the right of a publication like the Bay Area Reporter to disagree with some of the views of the Proud Boys, but in the story it's a statement of fact that we are white supremacists and that's completely untruthful," Van Dyke said.

Van Dyke reiterated that the group allows men of all races and "homosexuals" to join.

Oakland mayoral candidate Cat Brooks was also quoted in DiEdoardo's column as referring to the group as "fascists" at Wilson's vigil.

SPLC was also criticized by Van Dyke in his email for its hate group classification of the Proud Boys, calling the civil rights organization "a discredited and highly disreputable attack dog of the far left."

SPLC, on its website, claims that the Proud Boys affiliate with known extremists, are known for their anti-Muslim and misogynistic rhetoric, and that the group attended the "Unite the Right" rally in Charlottesville last year, in which Heather Heyer was killed after a car allegedly driven by a white supremacist plowed into a group of counterprotesters.

Van Dyke denied that the Proud Boys were involved in the Charlottesville rally.

In threatening legal action against the B.A.R., Van Dyke, in the email, wrote he was instructed to make only one demand for a correction and retraction and "failure to respond to this letter in a timely fashion may result in referral of this matter to our attorneys in California for legal action against you."

Van Dyke told the B.A.R. he has sent over 150 letters to various publications for referring to the Proud Boys as white supremacists, white nationalists, or racists.

In response to this threat, DiEdoardo, who's an attorney, said, "While it's cute they think they're being intimidating, their best efforts will never be sufficient to stop trans and queer columnists and activists like me from doing our job in these times, any more than police harassment deterred our foremothers during the Compton's Cafeteria and Stonewall uprisings."

The Compton's riots, which happened in 1966 in San Francisco, and the Stonewall riots in New York City in 1969, are considered important events of modern LGBT history.

The Proud Boys was founded in 2016 by Vice Media co-founder and former commentator Gavin McInnes. Shortly before a Unite the Right 2 rally took place August 12 in Washington, D.C., McInnes and the Proud Boys' Twitter accounts were suspended. A Twitter spokesperson told BuzzFeed News that it suspended the accounts for "violating our policy prohibiting violent extremist groups."

Van Dyke said these efforts and the narrative that describes the Proud Boys as white supremacists or nationalists are being fictionalized because companies like Twitter and the press are trying to prevent mainstream conservatives from being elected in the midterm elections.