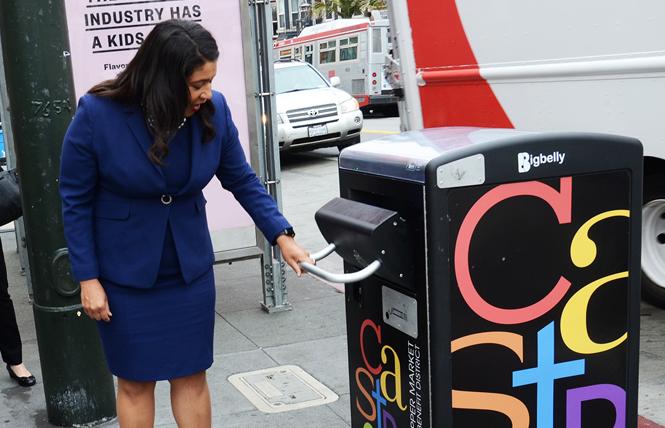 Mayor London Breed checks out the Bigbelly trash can on Castro Street during her unannounced walk around the neighborhood Monday. Photo: Rick Gerharter

Breed's visit came in response to the Bay Area Reporter's August 9 editorial inviting her to the district after her initial merchant walk was canceled due to weather when she was acting mayor in January. Shortly afterward, Breed's colleagues on the Board of Supervisors voted her out as acting mayor and installed Mark Farrell as mayor.

One of her first greetings were to two homeless men sitting in front of Posh Bagel on Castro Street.

"Our friends are going to come out to see what we can do to help you," Breed said. Breed quickly had her team call Jeff Kositsky, director of the city's Department of Homelessness and Supportive Housing. Later in the walk, she said an area of improvement is getting her team to respond more quickly to requests regarding homeless people.

Passing the CVS parking lot, Zuniga mentioned the decrease in car break-ins and loitering in the lot since the installation of a security gate that locks at night. The San Francisco Municipal Transportation Agency announced plans last month to install another security gate in the Walgreens parking lot on 18th street between Castro and Collingwood streets.

A Castro resident, Seth, who declined to give his last name, then approached Breed, urging her to improve the safety and cleanliness of the Castro and expressed his concern of the sustainability of tourism in the area.

"I agree," Breed said to the man. "That's why I'm doing this. I come out, check it out, call my team. I want some attention paid to all of these neighborhoods."

She said she expects the Fix-It Team to be in the Castro everyday cleaning the streets.

Andrea Aiello, executive director of the Castro/Upper Market Community Benefit District, was at the walk and said her cleaning team of about four full-time employees works well with the mayor's Fix-It Team, both of which clean the Castro streets on a daily basis.

Aiello said her team starts around 5 a.m. everyday and takes care of the "big stuff," then the Fix-It team members help fill in the gaps.

CBD staff focus more on the commercial areas of the Castro, while the Fix-It team focuses on the residential areas. Aiello said she is working on collaborating more effectively with Fix-It to make sure the teams are not covering the same areas simultaneously.

In front of the Castro Theatre, Zuniga pointed out the Bigbelly trash bin. Zuniga worked with the Castro/Upper Market Community Benefit District to install the Castro's current five Bigbelly bins earlier this year.

In July, Breed proposed roughly $725,000 in additional resources to support the Fix-It Team to take care of graffiti, broken streetlights, and unpainted curbs throughout the city, according to a news release circulated by the Mayor's office. The two-year budget amendment will also include the installation of 20 more Bigbelly bins in the city.

"These are the trash cans we need everywhere," Breed declared about the 150-gallon self-compacting receptacles that can accommodate almost five times as much as the traditional 32-gallon bins scattered throughout the city.

As the mayor arrived at Jane Warner Plaza, she was notably surprised at how clean it was.

"It's real clean," she said. "I mean very clean. I am really happy about that."

In response to Breed's calling Jane Warner Plaza "clean," Aiello said, "The Castro benefit district was out here at 5 a.m., that's why it's clean."

Aiello also added that she is optimistic about the mayor's ability to lessen the homeless crisis in the area.

Typically, the plaza is a hotspot for homeless people and trash, as Zuniga explained, and said it's a "hit or miss every hour" whether it's clear or not.

Across the street at the Harvey Milk Plaza and Castro Muni station, Breed was approached by 32-year-old Afik Cohen, on his way to work. Cohen, a gay man, wanted to know what the mayor was going to do to mitigate the amount of homeless living in his neighborhood.

"It's not just one thing," Breed told him about her homeless solution plan. "It's going to be a lot of different things because not every homeless person has the same situation, and you have to treat it as such. It's a process."

Breed also mentioned that she'd like to see more Navigation Centers open in or near the area and mentioned the 125-bed center that opened in 2015 on Bayshore Boulevard.

"The most important thing to me right now is helping the homeless and getting them off the streets," Cohen, who supported gay former state lawmaker Mark Leno in the mayor's race, told the B.A.R. after his conversation with Breed. "It's not humane to them, it's not humane to residents, and it's not sanitary to anyone dealing with people living on the streets."

Strolling up Market Street, Breed spoke with a San Francisco Public Works employee in an orange vest who was cleaning the public restroom at the intersection of Market and Castro streets. Breed plans to install more public restrooms in the area and beyond, she said. She also called on her team to replace a broken traditional trashcan on Market Street.

Two Castro beat officers strolled by and shook hands with the mayor.

"Glad to see you out here," she said. "We have to make sure we have our beat officers, our people, and folks out here on a regular basis."

She also said people with dogs need to be held accountable in picking up their pet's waste.

Though she planned to make it to the Eureka Valley/Harvey Milk Memorial Branch Library, her walk was cut short due to time constraints.

"It's clean for now, but we need to make sure it's like this all the time," Breed said.

Aiello said she was hopeful changes would continue.

"Personally, I am hopeful with the new administration, particularly Mayor Breed, that she will work collaboratively with the entire Board of Supervisors and really address the homeless issue," Aiello said. "That is what everyone in the city is hoping for."

The mayor has completed two other unannounced walks in the Tenderloin and South of Market since she took office July 11.