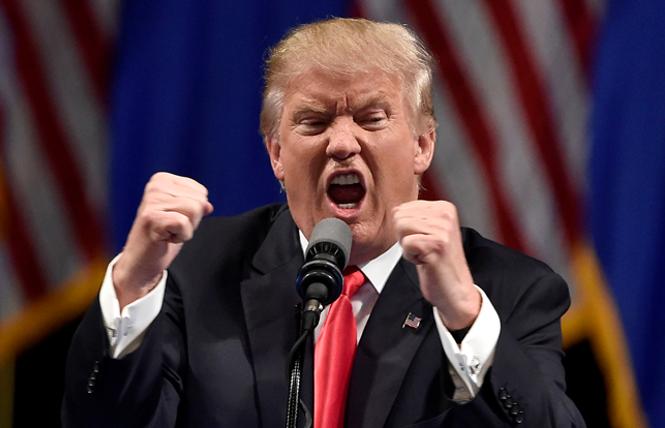 Today, the Bay Area Reporter joins 200-plus publications across the country, spearheaded by the Boston Globe, in condemning President Donald Trump's constant attacks on the news media. "The impact of Trump's assault on journalism looks different in Boise than it does in Boston. Our words will differ," read the Globe's request circulated by the Association of News Editors. "But at least we can agree that such attacks are alarming."

From "fake news" to "dangerous and sick" to, most terrifyingly, "an enemy of the people," Trump's tweets and statements disparaging the media and journalists are intended to discredit the investigations swirling around the administration and, more importantly, to cast doubt on news organizations and their reporting. It is way past time for Trump and his sycophants to end this dangerous rhetoric, but we know they will not. We all must reject his baseless criticism.

When the president regularly tells the country that reporters write or broadcast "fake news," it has a chilling effect on freedom of the press - and on consumers who depend on accurate accounts of what the administration is doing and saying, including the president. News articles repeatedly call out the president's hypocrisy with little effect on his supporters. He says his tariffs "are great," while soybean farmers in the Midwest will soon be eligible for a government bailout because they're losing their shirts over Trump's harmful trade policies. The president says he can't do anything about families being separated at the border and then signs an executive order ending a practice that he never had to implement in the first place. The president rails against "chain migration," and yet his in-laws become American citizens through that very process. The list goes on and on.

A month after Trump took office, he declared the media to be "an enemy of the people." Since then, according to CNN, he has used "fake," as in "fake news," "fake stories," "fake media," and "fake polls," more than 400 times. The consequences are dire for LGBT people, because as Trump blasts the media for writing "fake stories," we are reporting on the president's very real decision to ban trans service members from the military and his efforts to scrap the Affordable Care Act, which has greatly benefited trans people and those with HIV/AIDS. Those aren't fake actions, they're really happening. The Trump administration is chipping away at policies set by President Barack Obama that benefit LGBT people. He's instructed federal departments to follow a "religious freedom" doctrine that may be used to discriminate against LGBT people. He's even infecting the judiciary by picking nominees who embrace this exception to discriminate.

Many Americans now view journalists with suspicion and mistrust due to the president's attacks on the media. That makes it harder for journalists to do our jobs because we depend on people to provide tips and comment for articles. It's tougher now to focus on our community if LGBT people are reluctant to agree to an interview. Some, especially immigrants, people of color, or trans people, will not speak to reporters for fear of retaliation from the federal government.

Don't fall for the clickbait on social media and don't let the president define your reality for you. He says it's "fake news" when media does not flatter him. We say be aware of news that affects you and your community, here, across the country, and around the world. Trump will continue calling media "fake news," but that doesn't mean it's true. A democracy depends on a free press; Trump's creeping authoritarianism is dangerous for our democracy and the American people.