Guerneville gears up for Pride - canceled 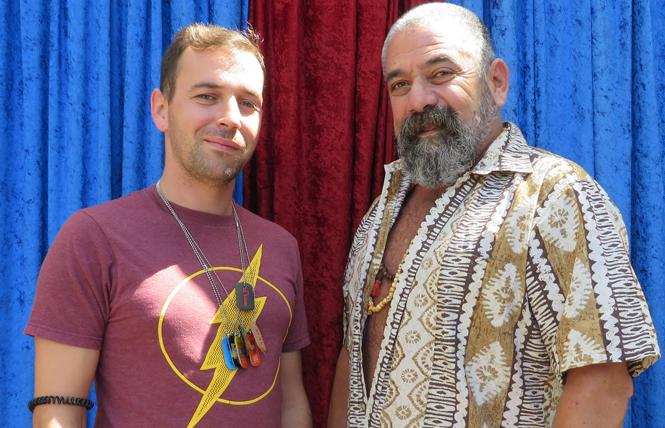 Update: After the print edition of the Bay Area Reporter went to press, it was discovered that organizers have canceled the Pride parade and some of the events set for August 25-26. Other events listed below may go forward. For more information, check out the Russian River Pride Facebook page. [end of update.]

Rodger Jensen, Pride producer and event coordinator at the R3 Hotel, has announced many other activities.

The theme for the weekend is "River Proud, River Strong, A Celebration of Diversity."

Russian River Pride activities start this Saturday, August 18, with a lighting ceremony at the Guerneville Bridge, a pedestrian span. Jensen said organizers were "inspired by the Bay Bridge lighting," and view the event as the "true kickoff for Russian River Pride."

According to Jensen, the evening will start with a pre-celebration from 8 to 10 p.m. at the R3 Hotel, located at 16390 Fourth Street. People will then walk to Guerneville Plaza and give a blessing of the bridge. After the lighting, people will gather back at the plaza, then head to an after-party at the Rainbow Cattle Company, located at 16220 Main Street.

The entry to the bridge crosses Guerneville Plaza, where a rainbow flag is flown along with U.S. and California state flags. Starting in the spring, the rainbow flag was stolen repeatedly. On July 13, Vincent Joseph O'Sullivan was sentenced to 36 months' probation and 100 hours of community service for those thefts.

Jensen believes walking through the plaza will commemorate "the whole crisis we've been going through with the rainbow flag theft."

Nicholas "Little Nick" Carrigan is volunteering as head of décor for Russian River Pride. Carrigan revealed they plan to attach 17 different types of lights to the bridge's exterior.

"We will meet at the south end of bridge after dark, and walk together to the flagpole," he said.

"We plan to leave the lights on until Monday, August 27," Carrigan said. "The lights will recognize what an iconic monument the Guerneville Bridge is. We hope they will give life to the bridge again."

Art walk, river float
Russian River Pride events will continue Friday, August 24, with a special Pride art walk in downtown Guerneville from 3 to 8 p.m. The walk will feature West County artists and craftspeople, and include art galleries, open studios, musicians, and performance art. A map is available at the Sonoma Nesting Company, located at 16151 Main Street.

Saturday's schedule starts with the "River Float with Part-Timers," organized by an ad hoc group of San Francisco and River residents. People can go down the river in inflatable rafts, canoes, or kayaks.

The event will end at Johnson's Beach, now owned by two gay men.

As of press time, starting point and time were still being worked out. Jensen said the R3 will host an after pool party.

Four events are planned for Sunday before the parade.

From 8 a.m. to noon, gay-owned 3 Alarm Grill, located at 16218 Main Street, will offer a special Pride breakfast with a prix fixe menu. (The eatery is owned by gay former San Francisco police Lieutenant Chuck Limbert, who retired from the department in 2015 amid an embezzlement investigation of another gay former officer, Michael Evans.)

Next door, the Rainbow Cattle Company will open at 9 and provide front-row parade-viewing for interested parties. Also starting at 9, the R3 will be mixing pre-parade Bloody Mary's.

The parade route will go down Main Street from west to east, ending at Guerneville Plaza. For those arriving early, DJ Kirk Herst will start playing music at 10.

Jensen is replacing the float judging, which formerly happened at the Pride parade in Guerneville, with a DJ playing music.

"I want to convey the idea that 'everybody is a winner,'" he explained, "and support the whole community."

Jensen is using the acronym LGBTQA, where "A" stands for allies.

"I want to include the straight community that supports us tremendously," Jensen said, "so Russian River Pride is an LGBTQA party."

Street fair
Four different options will be available Sunday afternoon from noon until at least 5 p.m.

First is a street fair on Fourth Street between the Timberline Restaurant and West Sonoma Inn, with food, beverages, and music for dancing by DJ Brian Hughes. The street will be closed to vehicles.

At the same time, a kid-friendly, alcohol-free Friends and Family Country Fair with swimming happens around the pool at the West Sonoma Inn, located at 14100 Brookside Lane.

For adult attendees only, Absolut Vodka will host a "Retro Party" at the Woods Resort, located at 16484 Fourth Street, with DJ Brian Bean.

DJ Bear Mittenz will spin music around the pool at the R3 all afternoon.

On Sunday evening, the final scheduled event is a Pride party at the R3 Resort.

Jensen is producing the weekend through his Rodger's Play Haus event production company and expressed special pride in how quickly he was able to raise the money from merchants and private donors. He said the total, at last count, had passed $12,000.

"We wanted to keep it more affordable than Sonoma Pride and tailored it for 'River budgets,'" he said. "There is no charge for the vendors at the street fair and the parade entry application was only $20" for contingents.

There is no cost to watch the parade and no gate fee for other events.

The biggest corporate sponsor is Absolut Vodka. The Russian River Sisters of Perpetual Indulgence are participants and also major sponsors.