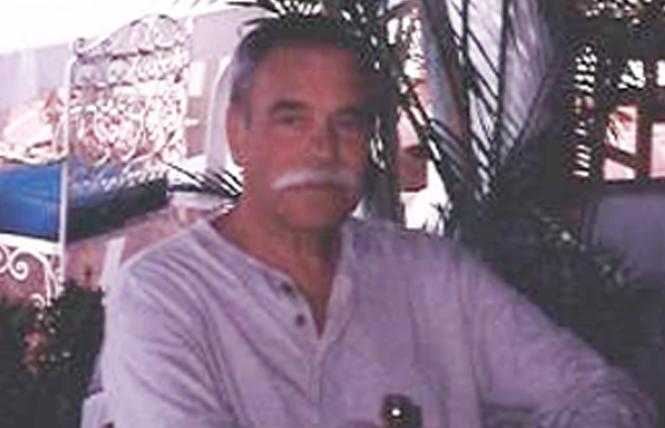 Paul Lorch, a gay man who, as editor of the Bay Area Reporter in the early 1980s, opposed closing gay bathhouses to stem the spread of AIDS and published a list of gays he said were "enemies" of the community, died July 21. He was 86.

He died peacefully at his home in Guerneville of natural causes, said his former roommate and longtime friend, Rod Hoglan.

Mr. Lorch published an "enemies list" of 15 gay men and one lesbian who supported bathhouse closure in an infamous April 5, 1984 signed editorial titled "Killing the Movement." He was adamant that outlawing gay spaces would be akin to "killing the movement."

"This group would have empowered government forces to enter our private precincts and rule over and regulate our sex lives," he wrote.

The fight over bathhouse closure divided the gay community in the 1980s. At the time, public health officials and many community leaders saw the move as a way to curb transmission of the HIV virus, while those who wanted to keep them open argued that they provided an ideal setting for safer sex education.

Others, like Mr. Lorch, were vociferously opposed to any closure and saw it as an assault on gay sexual freedom and a slippery slope to government intervention in one's private life.

There were also divisions in the business community. The baths were lucrative for their owners, as were gay bars and other gathering places. Papers like the B.A.R. benefitted from advertising dollars from bathhouse owners, said current B.A.R owner and publisher Michael Yamashita, who was not with the paper during Mr. Lorch's tenure.

Ultimately, in October 1984, the bathhouses in San Francisco were closed. The ban did not target bathing facilities per se, but rather private rooms with closed doors that could not be monitored.

Many of the people on Mr. Lorch's list have since died. The editorial has been mentioned in several publications over the years, including the late gay reporter Randy Shilts' book "And the Band Played On."

But some are still living, including the sole lesbian, former state senator Carole Migden, who said she was sorry to hear of Mr. Lorch's passing.

"He was very vehement and vigorous," Migden wrote in an email. "We differed on 'bathhouse closure.'

"Yet with AIDS infections growing exponentially and countless gay men dying in a matter of months, I and others believed that the closure of bathhouses would help stem the spread of this relentless disease," she wrote. "It did help, thankfully."

Tim Wolfred was another name on Mr. Lorch's list. A gay man who at the time was on the City College board, Wolfred said in an interview last week that being named "didn't have much impact on me."

"I was up for re-election to the college board and the B.A.R. endorsed me," he said, adding that he won his race. "The next year I became executive director of the San Francisco AIDS Foundation."

Wolfred said that he and Mr. Lorch "always remained friendly."

Wolfred said that Mr. Lorch went on to work at City College of San Francisco.

Hoglan said that before his retirement, Mr. Lorch served as the liberal arts dean at City College.

"He was very erudite in many ways," Wolfred said.

Wolfred explained that the 1980s were "a very heated time" as AIDS began decimating the gay community and the bathhouse issue came to the fore. But he didn't think Mr. Lorch's list had a lasting effect on the careers of people on it.

"It kind of came and went quickly," he said, adding that he and Mr. Lorch never spoke about the list.

Others were less generous.

"It's still very sad to say, but most of the gay men listed as 'enemies' died of AIDS during the years after that was published," Huberman wrote in a Facebook message, "including my best friend, Bill Kraus.

"Somehow I survived, but I will never forget Paul's role in creating that list," he added.

Longtime dermatologist Marcus Conant, who was one of the first physicians to diagnose and treat AIDS patients in 1981, was also on Mr. Lorch's list.

Conant, who's 82 and still runs his practice, told the B.A.R. in a phone interview that while he thought Mr. Lorch "was fighting for a cause that was a just cause," the media had a responsibility to provide factual information.

"It's extremely important for people in positions of responsibility to convey facts," Conant, a gay man, said, adding that in the 1980s "there was no internet, no Google."

"Even the mainstream press like the New York Times and TV viewed AIDS as something affecting a marginal group," he said. "So the B.A.R. was where the gay community was going for information.

"In 1984, Paul was so desperate to maintain what had been achieved for the gay community," Conant added. "Unfortunately, in so doing, he deprived gay people of the information they needed."

During his tenure at the B.A.R., Mr. Lorch was a part owner of the paper. Publisher Bob Ross, the majority owner, terminated Mr. Lorch as editor two months after the editorial, in June 1984. Hoglan declined to provide the reason for Mr. Lorch's firing and Paul Melbostad, the paper's attorney, said he could not remember.

Mr. Lorch later sued Ross for wrongful termination. The suit was settled by Ross buying back Mr. Lorch's shares in the corporation that owned the B.A.R. by mutual agreement, Melbostad said. Ross died in 2003.

Mr. Lorch was born on May 10, 1932 in Bronx County, New York. He attended Regis High, the number one Catholic High School in the country. Hoglan said that he attended and graduated the University of Toronto.

He served in the Army. Hoglan said he believed Mr. Lorch started living full time in San Francisco in the early 1960s.

"Prior to that, he was teaching at a college in the Sacramento area," Hoglan wrote in an email.

"The three of us went to lunch in the Castro, but Lorch was running the show, and Bob was happy as a clam," Horn wrote in an email.

"Bob felt Mr. Lorch was responsible for taking the B.A.R. to a new level at one point," Horn added. "He clearly played an important role in establishing the B.A.R. as the leading gay publication in San Francisco."

Hoglan said while Mr. Lorch lived in Guerneville, men would come up and thank him.