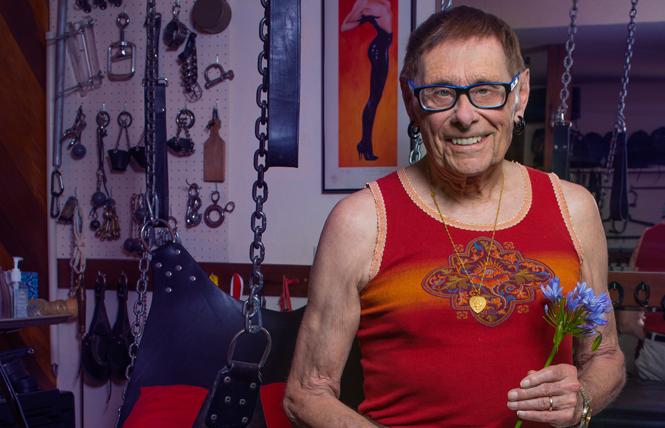 Fakir Musafar, an icon of the modern body modification culture, died at his home in Menlo Park August 1. He announced in May that he was fighting advanced lung cancer. He was 87.

Born Roland Loomis, Fakir, as he was known, was widely known as a body modification pioneer and founder of the "modern primitive" movement. He was a photographer, performance artist, and taught body piercing and body play rituals to countless students worldwide.

"He never set out to make a show of crashing through social and sexual barriers," said longtime friend Patrick Mulcahey. "His earliest experiments in bondage, sensation, and out-of-body journeys were performed entirely in secret. He wasn't so much about breaking boundaries as he was just blind to them."

Fakir was born August 10, 1930, in Depression-era Aberdeen, South Dakota. He went to school with children from the local Sioux Indian reservation, learning from them about Native American culture.

Fakir recalled being a bright and solitary boy who read encyclopedias from cover to cover, taking a particular interest in tribal cultures and their rituals. As recounted in his 2002 photography book "Spirit + Flesh," as a teenager he began experimenting with body piercing and self-bondage in his family's cellar.

Fakir earned a degree in electrical engineering from Northern State University and, many years later, a master's in creative writing from San Francisco State University.

By the time he was working as an advertising executive in San Francisco and Silicon Valley in the 1950s and 1960s, his solo explorations had evolved to include hook suspensions, extreme corseting and other body rituals, much of which he documented in self portraits.

In the 1970s and 1980s, Fakir began to connect with others who shared his interests. He recalled that he initially went public at an international tattoo convention in Reno in 1977. Fakir became involved with the gay leather community in Los Angeles, the Society of Janus, and the sex radical scene in New York City. Over his lifetime he embraced multiple sexual and gender identities.

Fakir gained wider attention with the 1985 film "Dances Sacred and Profane," in which he and Gauntlet founder Jim Ward participated in a sun dance, a Native American ritual that involves pulling against hooks in the flesh. His fame grew with the 1989 publication of the RE/Search book "Modern Primitives," a term he claimed to have coined.

Fakir was frequently asked about appropriation of rituals from other cultures.

"You can see it through the eyes of your own culture but you can still catch the fire ... Fire is fire, no matter where it burns," he said in a 1992 interview. "I may have been inspired by them, but much of what I've done has been quite different. But I thank them and I'm very appreciative that I've had a chance to be inspired to do anything at all."

Over the years Fakir appeared in numerous documentaries, his writing and photography were featured in many magazines and anthologies, he lectured at universities and exhibited his work in galleries around the world, and he published his own magazine, Body Play & Modern Primitives.

"Fakir's every movement was a beautiful dance of exuberance," artist and filmmaker Madison Young, who displayed his work at her former San Francisco gallery Femina Potens, told the B.A.R. "When I think of Fakir, I think of his passion, his joy, his transcending light, his magic, his epic fearless commitment to life, art, community, and the body as art. His radiant spirit always transcended well beyond the flesh and it always will."

"I am grateful and honored beyond words to have known you - all of you who have been touched by my presence and followed my example," he wrote in a Facebook announcement about his cancer in May. "I never expected our passions and practices to grow to a global phenomenon ... Thank you for embracing, growing, and embodying our art, craft, and energetic ritual practices. They have changed the cultural landscape worldwide."

Fakir's archives and memorabilia are held by the Bancroft Library at UC Berkeley, the Leather Archives & Museum in Chicago, and the Association of Professional Piercers.

Fakir is remembered by his wife, Carla Loomis (aka Cleo Dubois), and his chosen family, loved ones, and students in the Bay Area and throughout the world. A celebration of his life is scheduled for November 4, at 2 p.m. at Public Works, 161 Erie Street in San Francisco.

"Fakir was one of those rare treasures among us that quietly went about the work of making the world a little bit better with everything he did," said B.A.R. leather columnist Race Bannon. "Demonstrating to the world the power of being a kinky man living out loud and proud long before it was more commonplace. Helping others revel in their own forms of transformative spirituality. Passing down his knowledge and skill to future generations through teaching. Fakir will be missed, but not forgotten. His influence is vast and has touched millions of people, whether they might realize it or not."

Updated 8/13/18: This story was updated to include memorial information.