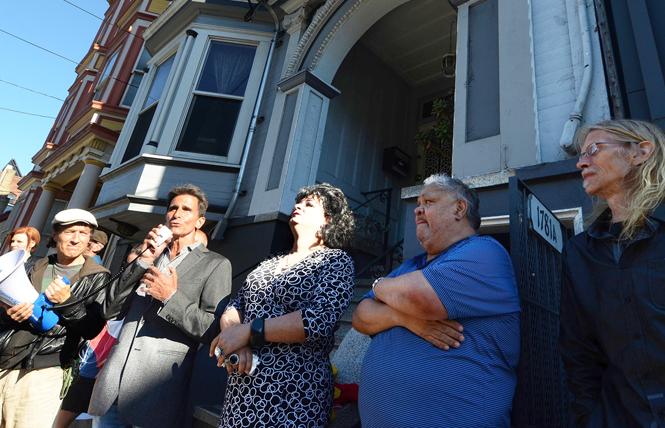 A spirited protest was held Monday night in front of the home where four LGBT tenants and a straight woman are fighting an Ellis Act eviction.

Well known figures, including gay former state lawmaker Mark Leno and gay District 8 Supervisor Rafael Mandelman, called for the repeal of the Ellis Act at the August 6 gathering at 1781 15th Street that included about 75 people.

The lawsuit, filed in San Francisco Superior Court, went to mediation last month, but was unsuccessful and is now scheduled for trial in November.

The crowd listened as Miranda stood on the front steps of his home, in full drag, with a megaphone to share his story.

"This is not just about our landlords, it's about our city. I have been here for 31 years and have fought hard," Miranda said. "The laws in this city need to be changed, not just for us, but for many of our friends."

Miranda spoke about the two and a half year legal battle he has fought with his landlords. Discrimination, he said, should not be tolerated anywhere.

The lawsuit claims that Wan has shielded the eyes of her 4-year-old son when Miranda has walked by in drag, has thrown out Miranda and Padilla's drag clothes that were held in a communal storage unit, and thrown away Miranda's barbecue and table and chairs from the backyard.

Wan previously refuted these claims to the Bay Area Reporter, saying she asked the tenants' permission to throw away the items and that the incident with her son never happened. Wan and Keller, who have two small children, want to make the house their family home without any tenants, Wan previously told the B.A.R. Wan did not respond to comment for this story before press time.

Andrew Zacks, Wan and Keller's attorney, said it's the tenants who have broken the law, not the landlords, referring to the tenants' having stayed longer than the Ellis Act time frame allows.

"We look forward to having our day in court and vindicating our clients' good names," Zacks said this week. "The energy spent resisting this should be going to helping the tenants find a place to live, and the owners are willing to help in that, but the tenants aren't willing to have that conversation."

Zacks said the owners were not home at the time of the protest.

Leno, who recently lost his bid for San Francisco mayor, is a longtime friend of Miranda's.

"I am here to say that we, the state of California, need Ellis Act reform," said Leno.

In 2003, while in the Assembly, he successfully passed Assembly Bill 1217, which allows local governments to exempt single-room-occupancy hotels from the Ellis Act. But repealing the law has been a non-starter in the Legislature, as have been other efforts to amend it.

Padilla, 59, also a drag queen, was emotional as he talked about his home of 22 years that is three blocks from his work and a part of his LGBT community.

"They are taking our home away from us," he said. "This whole Ellis Act is just crazy. You look out on the streets and see homeless people living in tents. I don't want to be thrown out on the street."

The tenants' attorneys, Raquel Fox and Michael Zitani with the Tenderloin Housing Clinic, were also at the rally. They are working with Mandelman in hopes of getting the city to buy the property.

Mandelman previously told the B.A.R. that he is working with the Mayor's Office of Housing and Community Development, which has a small sites acquisition fund, as well as the Mission Economic Development Agency.

"It's so wrong that the very people who make up the fabric of San Francisco, who make it a special and desirable place, are being pushed out," Mandelman said at the rally. "We need to make changes to local laws that stop these kind of evictions and recognize neighborhoods are not just investment vehicles, they are places where real people live."

Another person at the protest, who faced an Ellis Act eviction in the 1980s during the AIDS epidemic when many gay men were being forced out of their homes, was Brian Basinger, who is HIV-positive and executive director of the Q Foundation. The nonprofit works to prevent homelessness for the LGBT and HIV-positive communities.

"City Hall gives us lip service, but they don't actually do what they could do to make it better for people on the ground. They only do what we force them to do," he said.

Previous dispute
As previously reported by the B.A.R., the tenants fought an earlier eviction attempt by Wan and Keller. The couple bought the property for $1.45 million in April 2014. They previously tried to evict Padilla, Branchflower, Carmichael, and Emperador, in October 2014 on the basis of an owner move-in, which allows a landlord to evict a tenant if the landlord plans to move into the property.