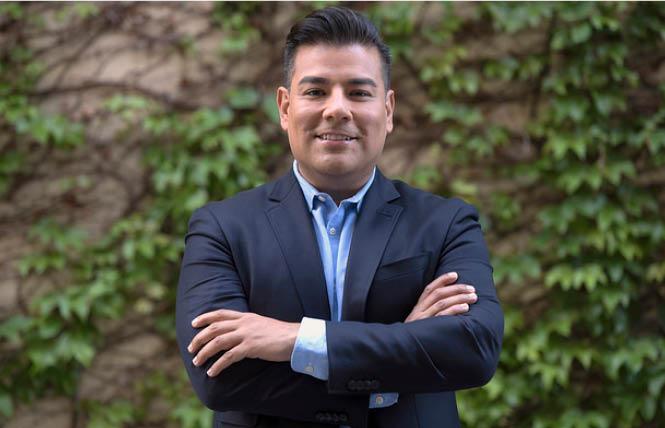 The gay lawmaker seeking to become California's next insurance commissioner is sitting on more campaign cash than his straight opponent ahead of the November election, according to the latest campaign finance reports.

State Senator Ricardo Lara (D-Bell Gardens) is looking to become the first openly LGBT person to be elected to the state's executive branch of government. He is running to succeed Dave Jones, who is term-limited from seeking re-election this year as California's insurance czar.

Lara landed in second place in the June primary and is now competing against the first-place finisher, Steve Poizner, on the fall ballot. Poizner, a former Republican who previously held the insurance commissioner position, is running as an independent this year.

Although Poizner collected more money - $185,051 - during the latest reporting period, he revealed he had just $23,196 left in his campaign account. He also disclosed that he had raised $1,046,455 during the first six months of the year.

Candidates for state office were required to file their most recent campaign finance disclosure forms last Tuesday, July 31. Lara is the only LGBT person seeking statewide office in California this fall.

Down ticket, there are 13 LGBT-identified candidates running for state legislative seats come November. One of the better-funded non-incumbents is Palm Springs resident Joy Silver, an expert on aging issues seeking the state's 28th Senate District seat.

She is aiming to unseat Senator Jeff Stone (R-La Quinta), one of the most anti-LGBT members of the Statehouse. Between late May and the end of June Silver raised $71,760, bringing her year-to-date total to $250,129.

Silver's continued fundraising success has bolstered the political newcomer's confidence that she will be able to unseat a sitting lawmaker.

"Riverside County voters are tired of Sacramento politicians like Jeff Stone who promise reform, but end up just being part of the broken system in Sacramento that fails to deliver for inland California communities," stated Silver. "In Sacramento, I'll put my business experience and outside perspective to work fighting to ensure the voices of ordinary people aren't drowned out by special interests or ignored by the career politicians. I'm excited our campaign is catching fire as we enter the general election."

Other lesbian candidates cash poor
In the only competitive Bay Area contest with an out candidate, lesbian Richmond City Councilwoman Jovanka Beckles is cash poor compared to her opponent, former Obama staffer Buffy Wicks. That is largely by design, as Beckles has eschewed taking money from corporate interests.

She is running a self-described "people power" campaign for the open 15th Assembly District seat, which stretches from Richmond south into parts of Oakland. The current officeholder, Assemblyman Tony Thurmond (D-Richmond), is running to be the state superintendent of public instruction.

Wicks, who picked up President Barack Obama's endorsement last Wednesday, raised $69,069 and reported having $101,158 to spend on the fall race. She netted a total of $205,544 during the first half of the year.

In San Diego, lesbian real estate agent Sunday Gover, who lives with her partner and their four children in Scripps Ranch, is running against Assemblyman Brian Maienschein (R-San Diego). The former San Diego city councilman was first elected to his 77th Assembly District seat in 2012 and has been very supportive of LGBT legislation over the last six years.

Sonia Aery, a Chico-based insurance agent and small business owner, is running against Assemblyman James Gallagher (R-Yuba City) for the 3rd Assembly District seat that includes all of Sutter, Yuba, Glenn and Tehama counties, and about half of Butte and Colusa counties.

Following the June primary, the Democratic National Committee touted Aery, who is queer, as one of four out women "poised to make the California state Legislature even more diverse." Like Beckles, she has rejected taking money from corporate interests.

Saturday, September 8, Aery will be holding a fundraiser at the gay-owned OMG nightclub in San Francisco. The event will run from 6 to 9 p.m. at the venue, located at 43 Sixth Street, and a minimum donation of $50 to Aery's campaign is requested.

Gay Republicans out matched in funds
Henry Gomez Nickel, a gay man who serves on the San Bernardino City Council, presents the best chance in years for LGBT Republicans seeing one of their own win a state legislative seat. Nickel, whose husband is an immigrant from El Salvador, is seeking the 40th Assembly District seat.

Gay GOP Ontario resident Matthew Munson is running against state Senator Connie M. Leyva (D-Chino) in the 20th Senate District, which encompasses parts of the Inland Empire. He has no chance of defeating her and has yet to report raising any money. Leyva, on the other hand, has raised $245,184 so far - $49,110 during the reporting period - and is sitting on $178,838 to spend.

Out incumbents flush with money
Of the four out incumbent Assembly members running for re-election this fall, the only one seen as vulnerable is lesbian Assemblywoman Sabrina Cervantes (D-Corona). The freshman lawmaker is fending off a strong challenge for her 60th Assembly District seat from Republican federal prosecutor Bilal "Bill" Essayli.

The state GOP has targeted Cervantes for defeat, using her vote for the state's controversial gas tax increase against her. Adding to her difficulties is the gas tax repeal measure that qualified for the fall ballot.

Lesbian Assemblywoman Susan Talamantes Eggman (D-Stockton) is expected to easily best her Republican opponent, Antonio M. Garcia, for her 13th Assembly District seat in November. While he has yet to report any fundraising, Eggman netted $122,121 during the reporting period, for a 2018 fundraising total to date of $271,375, and had $379,866 to spend.

His opponent, Maggie Campbell, has raised $1,832 so far this year, all during the latest reporting period, and had a negative balance of $216 in her account as of July 1.

Currently, there are eight out members of the state Legislature, four each in the Assembly and Senate. The membership of the California Legislative LGBT Caucus is also split evenly between men and women at the moment.

Should Lara depart at the end of the year, and Cervantes secure a second term, then it would take two of the out non-incumbents winning their legislative races to bring the LGBT caucus's membership up to a historic record of nine members.