Vietnamese LGBT activist: Sports is the avenue to equality 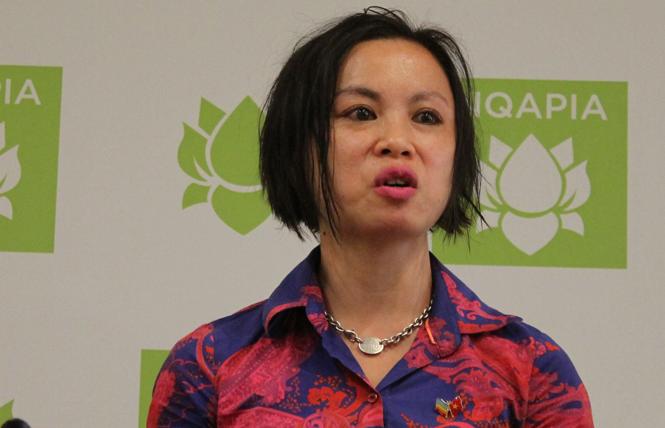 The award-winning activist, who is the founder and chief of smiles at Amazin LêThi Foundation, a Vietnamese-American sports organization, was in San Francisco last week for the National Queer Asian Pacific Islander Alliance Conference.

LêThi spoke about LGBT rights in Vietnam and Asia overall and how sports can serve as a catalyst to LGBT equality throughout Asia at a NQAPIA news conference with international LGBTs.

"Sport is the language that everyone understands," said LêThi, who declined to state her age and simply identifies as a rainbow person. "It's a catalyst to highlight the injustices that API LGBT people face within the community."

Sports served as her own salvation as a self-described "transracial adoptee." LêThi was born in Saigon, Vietnam, but was placed in an orphanage by her mother and adopted by a family who raised her in Australia, Europe, and the United States.

Growing up in a mostly white environment she suffered bullying in school because she was different. It caused many personal problems for her, including homelessness at one point, but she found solace in sports as a bodybuilder.

"Sport has always been such a huge part of my life," said LêThi, who uses sports as a platform to promote equality for LGBT people in Vietnam and queer Vietnamese in the United Kingdom and the United States. "When I was bullied as a child, sport was where I found my solace. It gave me the confidence to be standing in my own truth, in my authentic self.

"I use sport as a platform to share my own story and in the hope that will inspire other API people to come out within the community and within the ethnic community," she added, noting that she's often the only Vietnamese and queer person in a room filled with sports professionals.

LêThi believes that LGBT people can use sports, either individual or team, to show people who they are.

This is why she uses "sports as a platform for equality" through her foundation, she said.

The foundation is a United States-based organization that also operates in the United Kingdom and Vietnam. She also serves as an ambassador for Athlete Ally.

Currently, she's doing a lot of work in the Deep South on behalf of Asian-Americans and LGBT people in the U.S. The work easily translates to her work in Vietnam.

"We're, at the moment, working in Georgia, because if we change the South, you change America," she said. "In Vietnam, it's a very similar climate."

"In terms of homeless LGBT youth, they're all coming from the South," she said. "So, for me, it's, 'Why wait for them in New York when I should go to the heart of the problem there?'"

In Vietnam, the foundation was the first organization in the country and Asia to give out educational scholarships to homeless LGBT Vietnamese youth last year. It also launched the first leadership sports in education and business program in Asia and Vietnam that brought together LGBT homeless youth and kids living with HIV.

The foundation's program is supported by foreign governments, international corporations, and some celebrities, she said.

Financial information about the foundation was not immediately available on GuideStar.

Vietnam's LGBT movement
Vietnam's government was the first in Asia to discuss marriage equality and, in 2015, it lifted the ban on same-sex marriage. However, the law was never formally legalized by the government, LêThi said.

Currently, LGBT Vietnamese people can get married, but it's not legally recognized, she said. Furthermore, there are no laws criminalizing or protecting LGBT people in Vietnam.

"Unlike in some of Asian countries, being LGBTQ in our country isn't illegal but isn't protected by the law," she said.

"Vietnam is still a conservative country," said LêThi. "There is family and social pressure to conform, get married, and have children. Rainbow people, LGBTQ people, still face many challenges in my country."

She noted that up to half of LGBT employees reported discrimination or anti-gay comments from their co-workers at all levels in the workplace. Transgender people are the most vulnerable, she said. Transgender individuals have difficulty finding employment and health care services on top of facing "vast amounts of violence and discrimination in the community," she noted.

The situation is just as dire in the schools, she said.

"It's very common for a rainbow youth in the school system to experience high levels of discrimination, bullying, and violence," LêThi told reporters at the news conference. "Many youth [are] made homeless because of their sexuality or their gender identity."

However, since the first Viet Pride was held in 2012, there have been 35 Pride events hosted in cities throughout the country's provinces as of 2017, she said.

Some of the Viet Pride events are "very small, but, at least it has something there for the youth. Even if it's just 20 people, it's showing a presence within the community that rainbow people exist," LêThi said.

Why sports are important
"Sport is king," LêThi said, "because it's such a slice of life."

"Sport is something that brings people together," she continued. "So, you may not understand fully about being a rainbow person, but you may be a massive sports fan. Through the language of sport, I can bring you into my conversation about social issues."

LêThi pointed to how athletes, like former San Francisco 49ers Quarterback Colin Kaepernick, influenced the conversation about racial injustice in the U.S. by kneeling during the national anthem before games a couple of years ago. Kaepernick went unsigned after he left the 49ers.

They are celebrities who amass huge followings to the point that anything they say or do has a broad effect, she said. It's not just athletes who can change the dialogue for equality; LêThi pointed to the economic and social effects sports teams had withdrawing from North Carolina and other states that passed anti-gay laws. It sent a message that had a positive effect on the LGBT community, she said.

"We have an important moment in history where we can use sport as a human civil rights movement," she added.

Heilman, 61, joined OutRight's board in October 2017. However, he has worked with the organization for many years prior to joining the board, he wrote in an email to the Bay Area Reporter from Stockholm.

He was traveling in Sweden prior to heading to Paris.

"OutRight does important work with regional and global LGBTQI activists," he wrote. "It seems like every month our community is under attack, and those who are fighting for equality are most vulnerable to losing their housing or their jobs or their lives.

"The Global Emergency Fund will give OutRight more resources to respond to these crises," he wrote.

"The safety and security of LGBTQI people are being jeopardized as crackdowns against our community worsen around the world," she wrote in an email statement to the B.A.R. "A Global Emergency Fund allows OutRight to respond to situations where LGBTQI people are at risk. This fund will help us to save lives."

For nearly two decades, Heilman has been running marathons to support various causes, according to a July 26 news release from his office.

"I wanted to use my participation as an opportunity to help others who live in places where it is dangerous for LGBTQI people to even exist, let alone fight for equality," Heilman wrote.

"I'm running so we don't forget all the LGBTQI people who are not able to participate," Heilman continued. "Gay Games has always been a leader in making sure LGBTQI rights are discussed prominently as part of the games."

He said that with significant progress advancing LGBTQI rights in the U.S., the community needs to "support people in other parts of the world who are struggling in very challenging circumstances."

The Gay Games will take place in Paris August 4-12.

To learn more or make a donation, visit http://www.gofundme.com/JohnHeilman or http://www.outrightinternational.org.

Grenell tweeted photos of himself and embassy staff marching in the parade, officially known as Christopher Street Day Berlin Pride.

It was the seventh time embassy staff marched in Berlin Pride. Previously, as the Washington Blade reported in 2015, U.S. Ambassador to Germany John Emerson, along with other foreign diplomats, opened Berlin's Christopher Street Parade.

"Ambassador @richardgrenell and Embassy Berlin are proud to be a part of #CSDBerlin! Let's get this party started!" he tweeted.

Grenell reiterated his pride in participating in the event on behalf of the U.S. embassy to the Morgen Post, a German newspaper that published Grenell's tweets on its live blog of the event.

"I'm proud to be with the embassy team at the Berlin Parade," said Grenell.

The ambassador and embassy staff also hosted an after-party at the U.S. Embassy Saturday evening as thunderstorms sent the Pride festivities indoors in the evening.