Castro drag queens sue to stay in their home 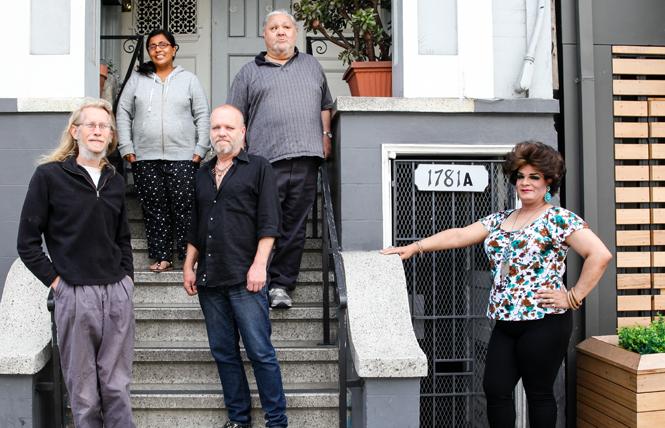 Donald Branchflower, aka Logos Branchflower, left, joined by Jennifer Emperador; William Carmichael, aka Lucille Carmichael; Richard Padilla, aka Renita Valdez; and Fredy Miranda, a.k.a. Alexis Miranda stand outside their longtime home, where the landlord is trying to evict them via the Ellis Act. Photo: Kelly Sullivan

In an ongoing legal battle, three drag queens, one gay man, and another tenant who live in the Castro are suing their landlords after receiving an Ellis Act eviction notice.

The tenants are claiming LGBT discrimination, unfair treatment, and are fighting to stay in their home at 1779-1781 15th Street.

Three of the tenants are drag queens: Richard Padilla, aka Renita Valdez; William Carmichael, aka Lucille Carmichael; and Fredy Miranda, aka Alexis Miranda. The other two plaintiffs are Donald Branchflower, aka Logos Branchflower and Jennifer Emperador, a straight woman who is Padilla's niece.

The lawsuit was filed in October 2017 in San Francisco Superior Court against the property owners, married couple Leslie Wan and Brian Keller. It went to mediation last month, but was unsuccessful and is now scheduled for trial in November.

It alleges the tenants have faced unfair treatment because of the "disgust and disapproval of [the] plaintiffs ... because of their sexual orientation, sexual expression, and practice of dressing in drag."

Padilla, 59, has lived in the apartment for 22 years and said he gets dirty looks from his landlords on a daily basis, particularly Wan.

"She has looked at us in disgust when she sees us coming out of the house or going back in the house in drag," Padilla told the Bay Area Reporter in a recent phone interview. "When we're coming up the stairs, either as a man or a woman, and she has her little boy with her, she shields his eyes and says, 'Don't look.'"

Regarding that specific incident, Wan, 34, told the B.A.R. "That never happened." She also said her 4-year-old son says "hi" to the tenants anytime he sees them.

Padilla also stated in the lawsuit that his drag clothes, along with Miranda's, were thrown out by the landlord when they were being held in a communal storage unit on the premises.

According to Wan, who spoke to the B.A.R. on the phone this week and was joined on the call by her attorney, Andrew Zacks, she asked both Padilla and Miranda permission to throw away the items that she claims were "collecting dust for two years" in the storage space. She said she has text messages on her phone that prove this communication exchange.

Though the landlords never used derogatory terms to refer to the LGBT tenants, Padilla said he feels the number one motivation of the owners to kick the tenants out is their LGBT identity. 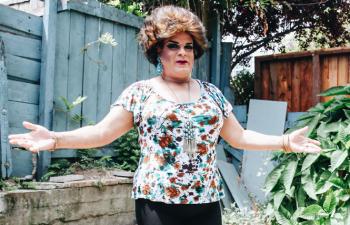 Fredy Miranda, aka Alexis Miranda, stands in her backyard, from which he said the landlord threw out patio furniture and a barbecue. Photo: Kelly Sullivan

Among other unfair treatment the suit alleges is illegal entry by the landlords into the tenants' homes. The landlords also barred the tenants from using the communal backyard and the storage and garage space.

"I know discrimination when I feel it," said Miranda, 51, who has lived in his home for 15 years. "We used to have barbecues five, six times a year and sit outside. I haven't had anyone over at the house for two years."

Miranda's barbecue, table with four chairs, and umbrella were thrown out by the landlords, he said.

Wan said she asked the tenants, via text message, permission to throw out the table, chairs, and umbrella. She said she also has texts that prove Miranda had given his barbeque away to a friend and says she never barred the tenants from using the communal space.

"They completely have always had access to the backyard," she said.

The owners also had Miranda's friends' cars towed after being in the driveway for a short period of time, without asking the tenants to move the cars first, Miranda said.

In an email, Wan wrote that she had no idea which car belonged to Miranda's friend.

"I am not sure if we are the ones that requested the tow," Wan wrote. "We have experienced ongoing instances of cars blocking our driveway and our car is therefore stuck in the garage."

Miranda is the manager of DivasSF, which he said is the city's only transgender bar. Due to having epilepsy, he told the B.A.R. he cannot drive and needs to live close to work. His home is less than two miles from the bar.

Padilla also lives close to his work. Both tenants want to stay in their home and be able to live comfortably, something they haven't been able to do since the owners took over three years ago, they said. Both men told the B.A.R. - and stated in the lawsuit - that their health has also suffered from the stress this experience has caused, including sleep deprivation and weight gain.

With skyrocketing rents in San Francisco, the tenants are scared of the outcome if they are forced to move.

"I want to live in my house. It's my house. I have been there for 22 years. This is my community," Padilla said.

Miranda said, "I have lived here for 15 years and the last three years here have been hell. I want to remain here, this is my home."

One of the tenants' landlords denied she has bias against them.

"I am not at all discriminatory against any groups," Wan said in a phone interview with the B.A.R. "I never have been like that and it's hard for me to hear when people accuse me of that."

Referring to the tenants, she also said, "We have different points of view on stuff that's happened."

She continued, "Their accusations are baseless."

Keller did not respond to a request for comment.

Wan said she and her husband bought the property when she was pregnant and have always planned to make it their family home without tenants. Wan and her husband now have two small children.

"We bought this house to live in with our family. We are not developers," Wan said. "Everything we have done has been working toward the goal of gaining possession of the house for our family."

Zacks, Wan's attorney, also noted that some of the tenants smoke, which he said was "a threat to the health and safety to their family."

Noting that the building has three levels, Raquel Fox, one of the tenants' attorneys, questioned Wan's claim that the couple wants to turn the building into their family home.

Land trust idea floated
The tenants' lawyers, Fox and Michael Zitani with the Tenderloin Housing Clinic, are working with gay District 8 Supervisor Rafael Mandelman in hopes of getting the city to buy the property. Zitani said Mandelman has reached out to the Mayor's Office of Housing and Community Development, which has a small sites acquisition fund, as well as the Mission Economic Development Agency.

"These five men and women are dealing with a situation no one should be subjected to, but, unfortunately, is all too common in San Francisco," Zitani wrote in an email to the B.A.R. "Their landlord is trying to unjustly evict them from their decades-long home out of greed, prejudice toward homosexual and transgender individuals, and willful ignorance of the lasting damage eviction causes."

Zitani also hopes to work with the San Francisco Community Land Trust, a nonprofit whose mission is to create permanently affordable, resident-controlled housing for low- to moderate-income people in San Francisco through community ownership of the land.

Mandelman said his office was exploring options for the tenants.

"In the few weeks since taking office, I've heard from a disturbing number of residents throughout District 8 facing Ellis Act evictions. I'm especially disappointed to learn that LGBT community leaders like Fredy Miranda and Richard Padilla are among those having to fight to stay in their homes."

He continued, "As with anyone at risk of displacement in the district, our office is exploring every available option to help them. This includes connecting them with community organizations like MEDA, as well as the Mayor's Office of Housing and Community Development. We're going to fight to keep these tenants, and all tenants, in their homes, and work with elected leaders at the state and local level to bring abuses of the Ellis Act to an end."

Previous dispute
The tenant-landlord dispute has been ongoing for more than two years. Wan and Keller bought the property for $1.45 million in April 2014. They previously tried to evict Padilla, Branchflower, Carmichael, and Emperador, in October 2014 on the basis of an owner move-in, which allows a landlord to evict a tenant if the landlord plans to move into the property.

Update: 11/09/18: This article has been updated to correctly identify William Carmichael, aka Lucille Carmichael, as being a drag queen.