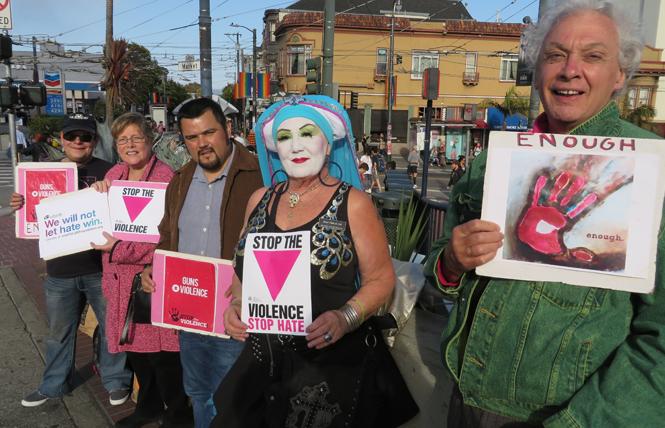 Ever since the mass shooting at Pulse nightclub in Orlando, Florida over two years ago, a small group of people have been holding weekly vigils in the Castro.

It was June 12, 2016 when Omar Mateen gunned down 49 mostly LGBT people of color and wounded 53 others before being killed by police at the gay nightspot. In the hours after one of the worst gun massacres in U.S. history, thousands of LGBTs and straight allies held vigils in cities across the country.

A crowd turned out in Harvey Milk Plaza that day to mourn the lives lost and those who were injured.

Shortly afterward, five members of the Companions of Dorothy the Worker met to discuss a longer-term response.

"Our group talked about doing an ongoing vigil of some kind," one of those people, the Reverend Diana Wheeler, recalled.

The group organized its first weekly vigil Friday, June 17, and attracted a dozen people, including members of the Sisters of Perpetual Indulgence and Castro Community on Patrol.

That vigil continues to this day, every Friday from 6 to 7 p.m. on the southern side of Market Street, just west of Castro. It is now officially known as the Companions of Dorothy the Worker Weekly Vigil: Stop the Violence. It is managed by the Companions.

From the start, the activists invited and encouraged the public to join them and they still do. They provide signs for all who do stand with them.

Wheeler observed that public reaction has always been very positive and said many cars honk their horns in support as they drive by on Market Street.

During the July 13 vigil, a passerby, Monica, who declined to give her last name, said, "I support this vigil because I'm against violence."

Her comment prompted Wheeler to recall, "About two weeks ago, a young man came off the bus, asked what we were doing, and kissed me on the cheek."

Several vigil founders were Companions of Dorothy the Worker, "an ecumenical Christian community ... [that] strives to make God's love felt in the queer community, which has been marginalized by the church and the world," according to the Companions' website.

"Many, but not all, are members of the queer community," Wheeler, a straight ally who is a Companion, said.

Left-wing Catholic activist Dorothy Day, who started the Catholic Worker Movement in 1933 during the Great Depression, is the "Dorothy" in the Companions' name. The movement was, and continues to be, known for actively supporting labor unions, human rights, cooperatives, and the development of a nonviolent culture.

"Companions ... have the opportunity and obligation to witness to their faith communities the realities, needs and concerns of the LGBTQ community outside the institutional church," according to its website.

Wheeler said Companions were inspired by, but not formally connected with, the Catholic Worker Movement.

Other consistent vigil attendees are members of Stop the Violence, an activist group founded over 20 years ago as a project of the Sisters of Perpetual Indulgence. Currently co-chaired by Sister Chola de Dah and Sister Roma, Stop the Violence is supported by CCOP, Community Patrol USA, and the San Francisco Police Dept.

"Businesses want to get involved, display our sign and get whistles," Sister Chola said.
The whistles, long handed out in the Castro, are used to attract attention when an act of violence is witnessed.

The "Stop the Violence" sign that was conceived by Sister Roma is one that is usually used at the Friday vigils, said Sister Guard N. O'Pansies.

Another sign used at the vigil is a reprint painting by artist Roger Hutchison. It depicts a bloody handprint with the word "Enough" printed on it.

Hutchison told the B.A.R. that his handprint painting first appeared on the cover of "Reclaiming the Gospel of Peace: Challenging the Epidemic of Gun Violence," edited by Sharon Pearson.

"Since the publication of this book and my sharing the image on social media, the image of the hand with the word 'Enough' has been shared tens of thousands of times - maybe more," he wrote in an email. "When I learned that it was being used in the weekly Pulse vigil in San Francisco, I was brought to tears."

On Friday, June 15, almost exactly two years since the Pulse mass killing, the weekly vigil group met and rang a bell 49 times to commemorate those lost in the tragedy.

Vigil participant Paul Brown emphasized that consciousness is an important aspect of the vigil. Brown believes regular meditation can, in itself, lower the level of violence in a city, based on studies published by the Maharishi International University. He has a background in meditation practice and education.

Brown encouraged vigil participants to join him for a mantra-based meditation on the last Sunday of every month in the community room of Bank of America at 18th and Castro streets. He also encourages all meditators to join the vigil.