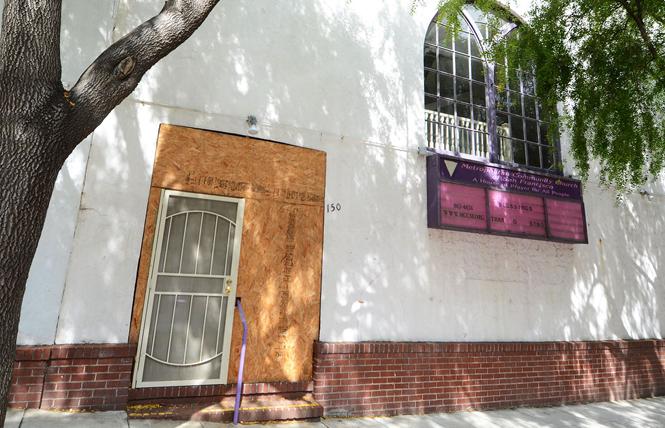 The façade of the former Metropolitan Community Church-San Francisco will be preserved when new housing is built on the site. Photo: Rick Gerharter

In a bow to the demands of the city's planning commission, the owner of a former LGBT church in the heart of San Francisco's gay Castro district now plans to partially preserve the building.

The decision led the oversight body to unanimously approve the project's environmental impact report by a 5-0 vote at its meeting last Thursday, July 26, after months of delaying its decision in order to pressure developer David R. Papale to alter his initial plans. He had sought to demolish the dilapidated structure at 150 Eureka Street, which for four decades was the home of the LGBTQ-identified Metropolitan Community Church of San Francisco.

"We very much appreciate their willingness to choose the partial preservation alternative. Not only did they get their project and the square footage it entails, but the community wins by retaining an historic asset," gay Planning Commissioner Dennis Richards, who had pressed for the change in the plans, told the Bay Area Reporter. "We all win. We all won on this one."

Prior to the hearing, Papale's lawyer Andrew J. Junius, a partner in the firm Reuben, Junius & Rose, LLP, sent an email to the planning commissioners informing them of the decision to change the project.

"In response to commissioner comments at prior hearings, it is evident that the commission would like to see more 'in exchange' for the demolition of the historic building. As such, at this time, the project sponsor is willing to commit to pursuing the partial preservation alternative, which would retain a significant portion of the front of the building," wrote Junius.

At the hearing, Junius told the commissioners, "I think we have hopefully turned a corner here."

The project, slated to total roughly 13,174 square feet and not exceed 40 feet in height, would have complied with the zoning for the site and not need to be approved by the city's planning commission. Although the new plans still call for only four units to be built, it will require conditional use approval from the oversight body.

"The conditional use would allow a maximum of four dwelling units on this site under the existing zoning. The project sponsor would also commit to diligently pursuing any possible accessory dwelling unit options that are available under current or future zoning," wrote Junius.

Preserving history
In a phone interview with the B.A.R. following the hearing, Richards said he was surprised by the decision and applauded Papale for agreeing to preserve a portion of the building.

"I am amazed it happened, honestly. But when you believe in something, you stay firm," he said. "They realized this was something that was not going away."

As the B.A.R. noted in a story last month, the planning commissioners first took up the matter in January, and at the time, several members expressed disappointment in the small number of units that would result from demolishing a building considered eligible for listing as a state historical resource. They had pointed out that incentives provided by the city and state for maintaining a historic property would allow the developers to build upwards of 21 units, albeit smaller ones, on the site.

Their doing so infuriated Richards, the panel's lone gay member. He expressed exasperation with both the project sponsor and planning staff for not reworking the EIR to include plans for how to construct housing within the framework of the existing church building.

Other commissioners shared Richards's disappointment in the proposed plans for the site and signaled they were unwilling to certify the EIR as written. Both Junius and Gary Gee, the architect on the project, said they had looked at ways to preserve the building and incorporate more units into the development, but doing so was not allowed under the current zoning for the site.

Having already spent three years seeking approval for the project, Junius said Papale did not want to prolong the process even longer in pursuit of seeking a zoning change that may not be approved. He reiterated that point in his email to the commissioners last week.

"As we have explained, higher density is not possible without re-zoning the site. Rezoning the site requires significant legislative efforts and adds a high level of uncertainty and risk going forward," he wrote. "After three years of process whereby the sponsor has diligently tried to comply with the existing zoning and planning policies, we believe the project sponsor should be allowed to move forward without being forced to try and rezone the site. The project sponsor simply is not in a position to restart the process in an attempt to increase the density."

In addition to incorporating a portion of the existing façade into the new development, Papale has also agreed to install a plaque or other commemorative element on the new building recognizing its historical significance as the former home of MCC-SF. He also has agreed to work with a local tour guide company on developing content for a stop at the building during historical walks of the neighborhood.

According to the EIR, Papale has also agreed to give $12,500 to the Horizons Foundation to cover the cost of replicating the commemorative bricks in the sidewalk in front of the former church, known as the Yellow Brick Road, at a new site. MCC-SF had sold the bricks, which honor members of the church and others from the city's LGBT community and Castro neighborhood, as a fundraiser for the congregation.

A community group has been working to find a new location to recreate the bricks. The original bricks are to be donated for use at the Pink Triangle Park and Memorial, the triangular site at Market and 17th Streets that honors the gay victims of the Holocaust.

"As long as we can find storage for them," said Gary McCoy, president of the park's oversight body, which will determine how to utilize the bricks at the site.