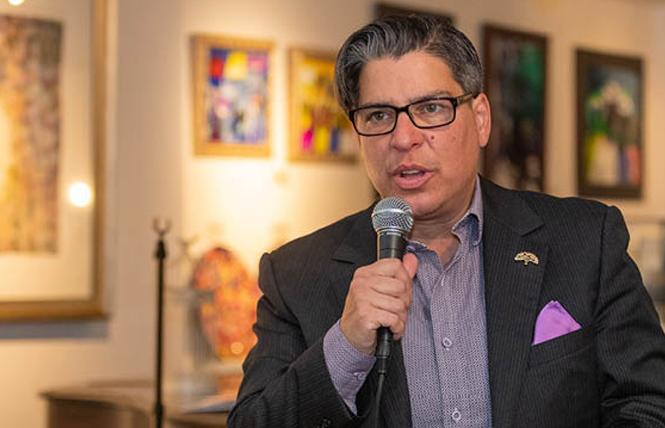 Last week, Steve Heminger revealed he intends to step down as executive director of the Metropolitan Transportation Commission on February 28, 2019. It will mark the end of a two-decade-long run leading the agency, which oversees planning and financing of transit projects throughout the region's nine counties.

Governed by a board comprised of 21 appointed officials representing cities, counties, and transportation and planning agencies around the Bay Area, the oversight body for the MTC will conduct a search to hire Heminger's successor. MTC Chair and Rohnert Park City Councilman Jake Mackenzie, along with six other MTC members, will serve on the committee that will guide the selection process.

Kaplan did not respond to a request for comment from the B.A.R. by press time Wednesday. As she noted on her resume for the MTC job, Kaplan has several decades worth of experience addressing transit issues.

"Many years of experience in transportation, including; policy-making, project conceptualization and implementation, and developing multi-jurisdictional transportation projects and programs, including work at the Bay regional level (and county)," noted Kaplan.

Prior to winning her seat on the Oakland council, Kaplan spent seven years as an elected member of the board that oversees the AC Transit District, which provides bus service in Alameda and Contra Costa counties.

She served for two years, from 2011 to 2013, on the executive board of the Association of Bay Area Governments, which last year merged with the MTC and shares the same executive director. Kaplan also served on the Bay Area Air Quality Management District Board, between 2016 and earlier this year, working on such issues as the promotion of carpooling and better transit shuttle connections.

Between 2001 and 2002 Kaplan worked as the policy outreach director for the Transportation and Land Use Coalition, now known as Transform, where she advocated for an "environmentally sound and equitable" transit plan for the Bay Area region. And in 2000 she played a leading role in the crafting and passage of Measure B, Alameda County's sales tax for transportation.

Should she be hired to lead the MTC, Kaplan likely would have to resign from her Oakland council seat two years prior to when her current term ends. She was re-elected in 2016 to a four-year term that ends in early 2021.

Gay SF planning commissioner reseated
San Francisco Planning Commissioner Dennis Richards, the lone gay member of the oversight body, and three of his colleagues have won new four-year terms on the powerful oversight committee. The Board of Supervisors voted 11-0 at its meeting Tuesday, July 31, to reseat the quartet.

Richards, who spent three decades working in the tech industry, and Kathrin Moore, an urban designer and architect, are two of the board's three appointees on the seven-person commission. Board President Malia Cohen, who represents District 10, reappointed them to terms expiring on July 1, 2022.

The mayor appoints the other four members on the panel. In late June, former mayor Mark Farrell had nominated Rodney Fong and Milicent A. Johnson to new terms that expire June 30, 2022.

Spickler, who lives in Santa Cruz and works for the county, could become the first transgender man to be elected to public office in California should he win the race. He also would be only the second known LGBT person to serve on the community college's oversight body.

In a statement to the B.A.R., BAYMEC Vice President Paul A. Escobar said the group was "overjoyed" to support Spickler's candidacy.

"His experience and knowledge make us confident that he would be an outstanding member of the Cabrillo College Board who will work to ensure all students get the education they deserve," stated Escobar. "Adam is thoughtful, effective, and dynamic, and he has been a champion for the Santa Cruz County LGBTQ community for years."

A preschool teacher while in school, he landed a job after graduation as the childcare center director at a local nonprofit preschool. He then went to work for gay former Assemblyman John Laird, the first and only out person to serve on the Cabrillo college board, in his district office in Santa Cruz.

Web Extra: For more queer political news, be sure to check http://www.ebar.com Monday mornings at noon for Political Notes, the notebook's online companion. This week's column reported on the Lambda Democrats early endorsement of five out candidates running this fall in Alameda and Contra Costa counties.