Activists want next AIDS confab out of Bay Area 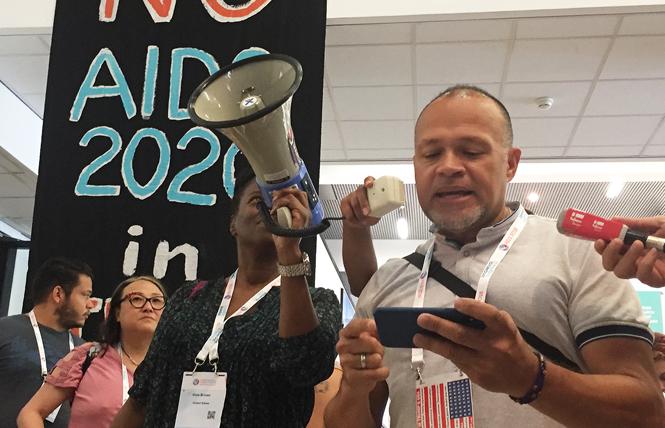 George Ayala, executive director of Oakland-based MPACT Global Action for Gay Men's Health and Rights, leads a protest in Amsterdam calling for the 2020 International AIDS Conference to be moved out of the San Francisco Bay Area. Photo: Liz Highleyman

Activists kicked off this week's 22nd International AIDS Conference in Amsterdam with calls to move the next confab out of the San Francisco Bay Area.

Protesters from the Bay Area and worldwide cited several concerns as the reason behind their demand that the International AIDS Society pull the conference, scheduled for July 2020, out of San Francisco and Oakland.

President Donald Trump's recent policy barring people from several mostly Muslim-majority countries, visa and immigration exclusion of prostitutes and "drug abusers or addicts," and racist violence create a "hostile environment" in the United States, according to a statement from HIVPowerShift, a new alliance of people living with HIV and members of targeted populations. Coalition member Cecilia Chung of the Oakland-based Transgender Law Center emphasized that IAS and city and state officials cannot guarantee the safety of conference attendees.

Others also weighed in.

"The hostile political context in the U.S. will make it nearly impossible for sex workers, people who use drugs; people from Muslim countries; and anyone with a criminal record, including LGBT people and human rights defenders, to enter the country and feel safe to participate in the conference," said George Ayala, executive director of Oakland-based MPACT Global Action for Gay Men's Health and Rights.

Ayala also predicted that the conference would create a "huge resource drain" for community-based organizations, and that disparities between San Francisco and Oakland would be "glossed over."

Asked about the location controversy at the conference's opening news conference, IAS president and AIDS 2018 Co-Chair Linda-Gail Bekker said, "That is the choice that has been made in a democratically motivated way. We have heard the voice of the community and are working very closely with that community."

She added that holding the conference jointly in San Francisco and Oakland will provide "an opportunity to highlight inequities even in a first-world developed setting."

Moving the conference due to opposition to the host country's policies would not be unprecedented. The 1992 conference was moved from Boston to Amsterdam at the last minute due to a policy prohibiting HIV-positive people from entering the U.S. A large coalition of community organizations have said they plan to hold an alternative global gathering outside the United States if the venue is not changed.

Conference kicks off
The conference opened with familiar news: despite remarkable gains in HIV treatment and prevention, barriers continue to stand in the way of universal access, researchers, advocates, and policymakers said.

While new infections have fallen dramatically in most of the world, stubborn pockets of stable, or even rising incidence, remain, notably in Central and Eastern Europe. Global AIDS funding has stagnated as large donors pull back and seek to transfer responsibility to affected countries.

Key populations impacted by the epidemic, including gay and bisexual men, adolescent girls and young women, transgender people, sex workers, migrants, and people who use drugs continue to face stigma - and in some countries, criminalization -that keeps them from accessing HIV prevention tools and effective treatment. And, too often, HIV policies are made without their participation.

Activists kicked off the conference with a march from central Amsterdam to the RAI convention center, highlighting factors working against the achievement of zero new HIV infections, zero barriers to treatment, zero discrimination, and zero stigma against people living with HIV.

PrEP and U=U
AIDS 2018 offered further evidence that PrEP and antiretroviral treatment can nearly eliminate the risk of HIV infection.

Alison Rodger from University College London presented findings from PARTNER2, a study of treatment as prevention that included nearly 1,000 mixed-status gay male couples in which the HIV-positive partner was on effective antiretroviral therapy with viral load below 200 copies.

These findings confirm the "undetectable equals untransmittable" message that was visible everywhere at the conference. National Institute of Allergy and Infectious Diseases Director Dr. Anthony Fauci offered further support at a pre-conference meeting, stating, "The body of scientific evidence to date has established that there is effectively no risk of sexual transmission of HIV when the partner living with HIV has a durably undetectable viral load."

In other prevention news, French researchers presented additional data about "on-demand" PrEP from a study called Prevenir. Although once-daily Truvada (tenofovir/emtricitabine) is the only PrEP regimen approved in the United States, the French Ipergay study showed that episodic PrEP taken before and after sex is also highly effective for men who have sex with men.

In the Prevenir study, participants were given the option of taking PrEP daily or on demand; 54 percent opted for the latter. In an interim analysis of 1,628 mostly gay and bi men enrolled through July, there were no new HIV infections among those taking either regimen. Lead researcher Jean-Michel Molina told reporters that PrEP use in the study has already prevented an estimated 85 new infections.

Another study showed that PrEP use does not reduce levels of feminizing hormones, a concern that keeps some transgender women from using the prevention pill. Tenofovir levels in the blood were about 13 percent lower when PrEP was taken in combination with estradiol, but they still remained above the threshold known to provide protection against HIV.

The growing evidence of PrEP's effectiveness has led to calls for wider use, which is limited by its cost - about $1,500 per month in the United States. Truvada manufacturer Gilead Sciences offers a co-pay assistance program for people with private insurance, but advocates have said the amount is inadequate. After sustained demands, Gilead raised its subsidy this week from $4,800 to $7,200. Many state Medicaid programs cover PrEP, leading to a growing drain on public funds.

Advocates with the PrEP4All Collaboration and the #BreakThePatent campaign released a new national action plan at the conference calling for universal access to PrEP in the United States. The Centers for Disease Control and Prevention has estimated that around 1.2 million people are at risk for HIV and could benefit from PrEP, but less than 10 percent are actually using it.

"After decades of research, most of it publicly funded, we have the tools to eliminate HIV transmission," the report concludes. "The current low rate of PrEP utilization is one of the greatest public heath implementation failures in the history of this country."

If the government were to allow use of generic versions of tenofovir and emtricitabine, a comprehensive national PrEP program including associated kidney function monitoring and regular testing for sexually transmitted infections could cost less than $2 billion annually. On a daily basis, PrEP drugs would cost less than a latte, co-author James Krellenstein said at an impromptu media briefing.

"We calculated that it would cost about $1.4 billion to get PrEP to all 1.2 million people who are eligible - a cost that would be well over $10 billion if we had to pay Gilead the current price it charges," Peter Staley of PrEP4All told the Bay Area Reporter. "We can't imagine a plan like this at current prices. The only way we can get there is with generic PrEP."