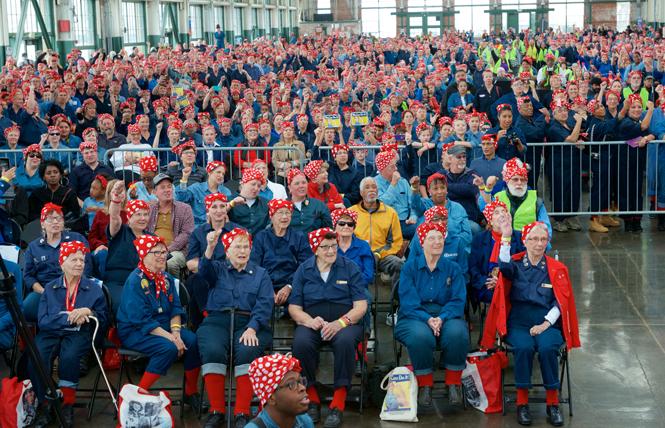 A sea of red and white polka dot bandanas is expected to flood the Craneway Pavilion in Richmond next month when thousands of people dressed as the iconic Rosie the Riveter will celebrate the spirit of the women who rallied to support the home front effort during World War II.

There will not be an attempt to set a Guinness record this year. Instead, there will be several contests.

From 11 to 1, there will be a costume contest with prizes for winners in several categories, including: best authentic 1940s period costume, best traditional Rosie costume, best non-Rosie home front worker, best parent and child costume, and most creative interpretation of home front history. The audience will award a grand prize overall.

Entertainment, organized by the East Bay Center for the Performing Arts, will include a big band, Texas swing, hip-hop, a Mexican trio, and 1940s-era music.

"We're rallying to show how women made a difference during one of the greatest challenges in our nation's history," Marsha Mather-Thrift, executive director of the trust, said in a statement. "Women across the nation, and here in Richmond, took on work that prior to this pivotal moment had mostly been the exclusive realm of men."

Organizers said that those dressed in costume will also benefit from special discounts throughout Richmond on the day of the event, including admission to the Columbia Sportswear employee store at Mountain Hardware, where a portion of sales from the day will be donated to the trust. A variety of restaurants, breweries, a winery, coffee shops, and other local businesses in nearby Point Richmond and beyond will be offering free or discounted items or services to rally participants dressed in any costume or identified by a wristband picked up at the event.

There is no cost to attend the festival. For more information, visit http://www.rosietheriveter.org/events/rosie-rally.

A short question and answer session will follow the string quartet performance.

There is no cost to attend, but space is limited. Advance registration is strongly encouraged and can be done at https://www.eventbrite.com/e/sf-symphony-at-the-sf-lgbt-center-tickets-48223281132.

The concert is part of an LGBTQ-focused evening for the fair - its first - from 5 to 10 p.m. The Out at the Fair event on the fair's opening day will feature other Pride-themed entertainment, such as Locura and Vocal Infusion, as well as activities and outreach booths providing resources and information for the LGBTQ community.

The fair runs through August 5.

There will be a DJ, photo booth, and food. San Jose City Councilman Don Rocha will also make an appearance on the dance floor, organizers said in an email announcement.

There is no cost to attend. For more information, visit https://www.defrankcenter.org/.