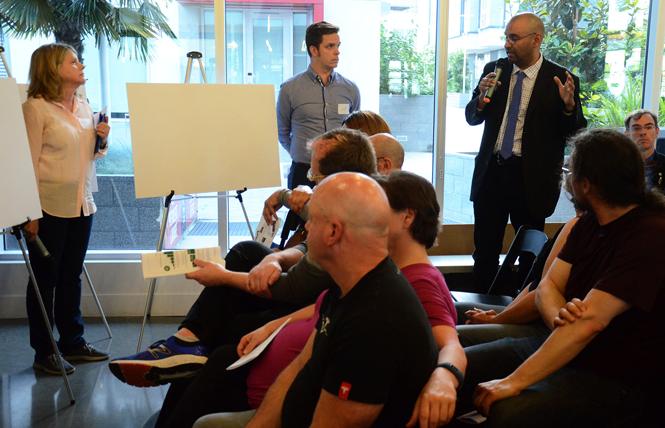 More than 100 members of the leather and kink communities gathered at the L7 apartment building in the South of Market district Tuesday to voice their opposition to a proposed new Starbucks in one of the building's commercial spaces.

Many were concerned that the opening of a Starbucks in that location, at 1222 Harrison Street, would have a negative impact on Wicked Grounds, an independently-owned coffee shop about a block away that caters to the leather community.

One of the affected people would be Wicked Grounds owner Mir Bilodeau, a genderqueer leather dyke who admits that her business has struggled financially to survive. Wicked Grounds was temporarily closed earlier this year.

The meeting was organized by Starbucks as part of the pre-application process.

Both Wicked Grounds and the proposed Starbucks are in the heart of the recently established Leather and LGBTQ Cultural District, which celebrates the strong leather and kink history of the neighborhood, supports businesses that serve the leather community, and encourages new such businesses to open.

Starbucks representatives Leslie Mitchell and Jeff Hoover also attended the meeting. They served pastries and coffee to attendees. They originally intended to discuss the chain's plans for the proposed store, which would include leather-themed decor. Instead, they took a step back and allowed community members to speak.

"You guys have something to say," said Mitchell as the meeting began. "So we're going to open up the meeting to your comments."

Emotions ran high as people spoke, with some individuals fighting back tears as they talked about what Wicked Grounds meant to them. Other expressed anger at Starbucks.

Lucie Schwartz, a transgender woman, said that she was a journalist who wrote for the San Francisco Chronicle from 1989-99, among other publications.

Schwartz said that she'd like to see a stripper or drag queen clothing shop in the location in lieu of the Starbucks, or an independent bookstore. Others told the Bay Area Reporter that they would like to see a business that serves the leather community move in.

"Give the space to Wicked Grounds at a reduced or affordable rent," said Teagan, who asked that only their first name be used. Teagan, who's International Ms. Bootblack 2018, and described herself as a transsexual woman. "Really, anything but a coffee shop. There are a number of shops within walking distance that already serve coffee."

Teagan added that something community-focused was needed. "Maybe work with other local businesses in the area to see what the need is. Maybe a late-night food shop. There's not a lot of food options in this part of SOMA."

As the meeting progressed, a building resident could be seen staring through the glass windows of the meeting room. He left, returning a moment later with a woman - they both stared through the window. Bilodeau noted their presence.

"They're staring at the freaks," they said. "This happens to us every day. This is why we need a safe space like Wicked Grounds."

Several straight allies also attended the meeting. Robin Crawford, 68, told the B.A.R. that he was not a member of the community, but that he was the parent of a 33-year-old transgender nonbinary person.

"My kid is assaulted virtually every day," Crawford, a San Mateo resident, said. "It's the story of everyone here. I know there are two safe spaces for them. In their apartment and at Wicked Grounds. It's not a coffee shop, it's a community center."

Johnny Truant said that he was a former barista at Wicked Grounds, and a member of the SOMA leather community.

The Starbucks reps listened attentively as everyone spoke but did not respond. At one point several people asked them if they had an answer for the issues being raised.

"I don't have an answer for you," said Mitchell.

As the meeting drew to a close, Bilodeau asked attendees to raise their hands if they were in favor of Starbucks moving into the location. Not a single hand was raised, but everyone raised their hands when asked if they opposed the Starbucks.

The Starbucks reps declined to state whether plans with the proposed Starbucks would move forward and told the B.A.R. that they were not permitted to speak to the press.

"I feel pleased and surprised that they opened the entire lead-in to dialogue with the community," Bilodeau said. "I don't think they realized the fervor, passion, marginalization, and vulnerability of the community. They think if you hang enough leather pride flags everything will be fine, but they don't realize that Wicked Grounds is a needed resource. I would like to hope that they won't open their Starbucks, but I've learned to never say it's done until it's done."

Several building residents were in the L7 courtyard. When asked how they felt about the Starbucks, they declined to speak.

Updated 7/20/18: This story was updated to indicate the meeting was part of the pre-application process by Starbucks, and to reflect that Mir Bilodeau uses gender-neutral pronouns.