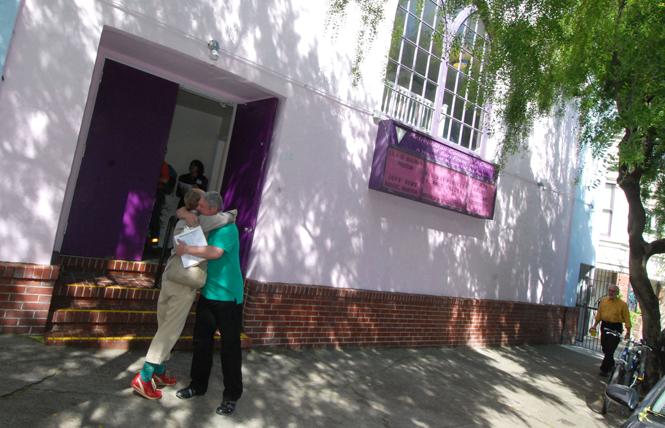 Plans to demolish the site of a former LGBT church in the heart of San Francisco's gay Castro district are being called into question by planning officials who would prefer to see the structure be preserved in return for allowing more housing to be built.

Developer David R. Papale bought the property for $2.325 million in February 2015. MCC-SF that month vacated the dilapidated building and moved in with the First Congregational Church at 1300 Polk Street, where it remains today.

Papale has proposed demolishing the building in order to construct two new buildings each with two units of housing with garage parking for four automobiles. The project would total roughly 13,174 square feet and not exceed 40 feet in height.

As currently proposed, the building plans comply with the zoning for the site and do not need to be approved by the city's planning commission. The oversight body does need to certify the project's environmental impact report.

Yet when the planning commissioners first took up the matter in January, several members expressed disappointment in the small number of units that would result from demolishing a building considered eligible for listing as a state historical resource. They had pointed out that incentives provided by the city and state for maintaining a historic property would allow the developers to build upwards of 20 units, albeit smaller ones, on the site.

Their doing so infuriated planning Commissioner Dennis Richards, the panel's lone gay member. He expressed exasperation with both the project sponsor and planning staff for not reworking the EIR to include plans for how to construct housing within the framework of the existing church building.

"I am very disappointed we are still here six months later with no progress being made on it," said Richards.

Fellow Commissioner Kathrin Moore said she shared Richards' disappointment in the proposed plans for the site.

Richards said he was particularly displeased with the notion that a property significant to the city's LGBT history would be torn down and replaced with only four units of housing in a neighborhood desperate for additional housing that is affordable to LGBT individuals of all ages currently priced out of the gayborhood.

"This is my community. This site is important to the LGBTQI community," he said. "We are just witnessing it be pushed into the dust bin. It is kind of offensive, to be honest with you."

Gary Gee, the architect on the project, said they did look at preserving the building and carving out 18 studio units, roughly 400 square feet, with no parking on site.

To which Richards responded, "Those are exactly the kind of units my neighborhood needs."

Possibly constructing eight units inside the existing building was also looked at, said Gee. But Papale's lawyer Andrew J. Junius, a partner in the firm Reuben, Junius & Rose, LLP, indicated that planning staff had informed them they could not add more than the four units of housing as proposed under the zoning for the site.

"We took the department's lead, which I do believe was the right answer here," he said. "I completely understand the desire to provide more housing."

Seeking to build more units would not only delay construction, Junius noted, but there is no guarantee the zoning change would be approved. So rather than seeing more housing be built within months, he said it could be another two to four years before the project could break ground.

"It is going to be four units or nothing for a long time. That is not a threat; it is a fact," said Junius. "If you have staff that doesn't want to work with you on upzoning, where do you start?"

Joy Navarrette, the planning department's principal environmental planner, acknowledged that city staff had discussed upzoning the site. But the department determined it "wasn't really a solution for this parcel, at this time, in this manner," she said.

Planning Commissioner Rich Hillis said he was ready to certify the EIR and ask planning staff to look at if there was neighborhood support for changing the zoning in the area to allow for denser in-fill housing projects.

"It is a mid-block site, so there is not much of a rationale to rezone this parcel," he said. "This is a perfect housing site."

The office of newly sworn in gay District 8 Supervisor Rafael Mandelman contacted Richards in the morning before last week's hearing. He said they were interested in discussing a zoning change for the site due to neighborhood concerns over the amount of housing being proposed.

Mandelman did not respond to a request for comment.

To allow time for the supervisor to meet with the developer and planning staff, Richards proposed continuing the matter for two weeks until the planning commission's July 26 meeting. The oversight body unanimously approved his motion 6-0.

Commissioner Myrna Melgar, who had agreed with Hillis that the developer had waited long enough to start work on the project, nonetheless also expressed disappointment that the developers had not presented alternative plans last week.

Noting the declining membership at churches across the city, leading to religious buildings being put up for sale, Melgar suggested that city planners should be proactively looking at how best to repurpose the sites, especially since many are located in residential areas.

"Are we being proactive in thinking how do we use these structures, many of which are historic structures?" she asked.