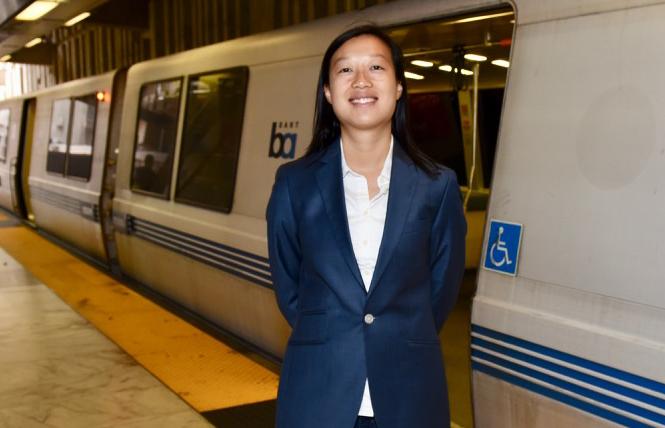 A queer bicycle advocate this week entered the crowded BART board District 8 race, and is one of at least two out LGBTQ candidates for the seat.

Janice Li, who is advocacy director for the San Francisco Bicycle Coalition, told the Bay Area Reporter that she filed her paperwork Thursday, July 19, for the November election.

Li, 31, said that her experience with the bike coalition will help the BART board, which oversees the multi-county rail system.

BART's District 8 is in San Francisco. There are only three BART stations in the district - Embarcadero, Montgomery, and Balboa Park - but they account for some of the transit agency's busiest.

The seat is open because current Director Nick Josefowitz is running for San Francisco supervisor in District 2.

Li said there are a couple of reasons she decided to run.

"I'm a queer woman of color and an immigrant and want to represent the west side of San Francisco," she said, noting the district includes the Sunset, Richmond, Parkside, and Lake Merced neighborhoods.

Li said that there are a lot of nightlife issues that she hopes to address, since BART currently stops running trains at midnight.

And, Li said she is someone who knows transit issues.

She plans to run a grassroots campaign and has been endorsed by gay BART board member Bevan Dufty.

"Janice has the experience, energy, and drive to make BART more accountable and improve service and safety," Dufty wrote in an email to the B.A.R. "Her knowledge and work on transportation funding and policy underscores, to me, why she will be a great BART director."

Dufty also said it was time voters elect the first Chinese-American woman to the transit agency's board.

Shanell Williams, a bisexual woman, is the only elected queer female official in San Francisco.

There is at least one other LGBT candidate who has taken steps toward running. William Walker, a gay African-American man who previously served as the student representative on the City College of San Francisco board, has pulled papers, according to the elections department's website.

In an email, Walker confirmed he is in the process of filing to run for the BART board.

His priorities include finding more sources of fully dedicated funding for BART, researching how to program or develop underutilized BART station space or surplus property, and studying the feasibility of developing large parking lots into mixed-use developments that incorporate affordable and workforce housing.

"Additionally, a long term vision for BART would be a fare-free or flat-fare BART system and a truly 24-hour system," he wrote in an email.

Walker, a San Francisco native, said he has ridden public transit since he was a child and is the son of a transit union president.

The filing deadline is August 10.