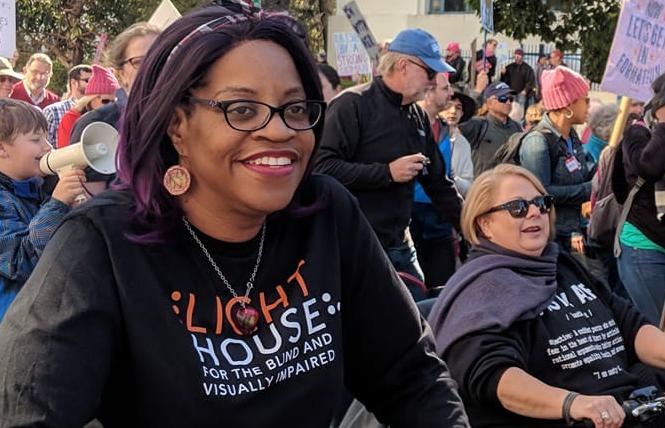 According to the online news site Vox, last year's Women's March on Washington was one of the largest gatherings of people with disabilities in U.S. history - exceeding demonstrations by disability advocates after the Senate passed the Americans with Disabilities Act decades ago.

Now, more than a year later, the Women's March continues to advocate for women from all backgrounds through its global platform in several cities.

But for San Francisco resident Robin Wilson-Beattie, a queer disability advocate and writer, not all Women's March chapters are inclusive of people with disabilities.

"I was disappointed, but not surprised," she said, "that San Francisco's Women's March did not have this. Nowhere did I see advertised any disability inclusivity or any acknowledgement of the importance of recognizing disability as a women's rights issue."

The Bay Area Reporter reached out to Women's March San Francisco for a comment. The public relations team replied immediately with the following:

"First, we hear Wilson-Beattie's feedback and frustration and are glad she was able to find a march that best served her needs," the statement read. "Women's March San Francisco organizes around the Women's March Unity Principles, among which disability rights features prominently. From our inception, we've considered the needs of our disabled community, providing trolleys for those with mobility issues, locating actions along accessible transportation routes, carving out an ADA area at the front of the stage, and providing ASL interpreters for all our actions."

Women's March San Francisco is an all-volunteer organization and welcomes referrals from individuals and organizations that could help them improve their services. The organization said, "We consult and also know we can always improve."

Wilson-Beattie, who is 40 and manages a spinal cord injury, as well as a diagnosis of attention deficit/hyperactivity disorder and depression, traveled out of her city and crossed the bay to Oakland to find a Women's March chapter that fit her needs.

"I signed up to march and volunteer, because the Oakland Women's March was the Bay Area event that made a concerted effort to involve people with disabilities as an inclusive part of the event," she said.

"Also," she continued, "The LightHouse [for the Blind and Visually Impaired] was organizing it, so I knew it would be legit."

Lisamaria Martinez, 37, an LGBT ally and director of community services for the San Francisco LightHouse for the Blind, mentioned her organization was contacted to help make Women's March Oakland more accessible. "Immediately, we jumped in and we helped to coordinate a 2018 pan-disability contingency for the march," she said.

Martinez, who is blind, had participated in the march in 2017, when she was pregnant, as a community member. Now, she was elated to march among her community and to come full circle.

"This time around, I marched with my almost 1-year-old daughter and about 50 other people with disabilities or allies," she said. "It was an amazing day, and I was so excited to share it with other people who have disabilities ..."

Catherine Kudlick, professor of history and director of the Longmore Institute on Disability at San Francisco State University, marched in the 2018 Women's March disability contingent. Kudlick, who is 60, blind, and bisexual, feels disability often gets left out of broader political organizing, and she found the disability contingent empowering.

"We were pretty much at the front of everyone," Kudlick said, "which was great for our being visible. At a couple of points, I ended up with the megaphone; I helped come up with a couple of chants to link us to the issues of the day."

"These are tough times," continued Kudlick, "for anyone who identifies in any way with being marginal - queer, disabled, person of color, and, surprisingly, in 2018, being a woman."

Alison Mata, director of operations for Women's March Oakland, stated that inclusion has been a priority of the chapter since its inception, and it has partnered with several disability advocates and agencies to ensure it honors its commitment to accessibility.

"Our peace ambassador trainings include disability etiquette and our upcoming activism trainings will dive further into this topic," said Mata.

Mata, 33, an event planner in the San Francisco Bay Area, was inspired by the Women's March on Washington, but felt she should respond to the movement locally. In addition to planning the march, she has been involved in organizing several clinics and events over the past six months through Women's March Oakland.

"We released a toolkit on removing barriers to voting in the East Bay for International Women's Day in March, held a voting workshop in May, and hosted the Oakland stop of the Women's March Power to the Polls tour in June," she said.

In the fall, Women's March Oakland will be hosting more voting clinics, launching an activism training series, and holding an event on building bridges across differences.

To get involved or volunteer, visit http://www.womensmarchoakland.org.

Belo Cipriani is an award-winning author and prize-winning journalist. His new book, "Firsts: Coming of Age Stories by People with Disabilities," will be published October 1. Learn more at http://www.belocipriani.com.