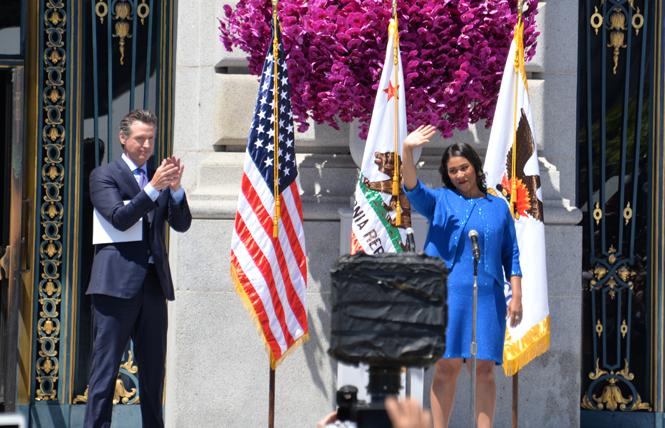 San Francisco welcomed in a new mayoral administration Wednesday morning when Mayor London Breed took her oath of office on the steps of City Hall before an estimated crowd of more than 1,000 people.

The Board of Supervisors also ushered in its newest member, gay District 8 Supervisor Rafael Mandelman, when he was sworn into office inside the board's chambers roughly 90 minutes after Breed officially became San Francisco's 45th mayor.

Lieutenant Governor Gavin Newsom, the city's 42nd mayor, administered the oath to Breed, who invited the San Francisco Gay Men's Chorus to perform as part of her inauguration ceremony. Breed, 43, is the first African-American woman to be elected to Room 200 in City Hall, where she spent several hours Wednesday afternoon receiving well-wishers, family, and friends.

"I grew up a few blocks from here but a world away," Breed, adorned in a glittering blue dress, said during her speech following her swearing in.

Noting how she grew up in public housing in the Western Addition, witnessing her friends succumb to drugs, teenage pregnancy, and gun violence, Breed said it was due to the love of her family and support from the city that ensured she did not face the same fate.

"I stand at this podium today because a community believed in me," said Breed, pledging that as mayor she would work tirelessly to provide the same assistance to today's youth. "Together, we can build a San Francisco where the next generation of young people can go from public housing to the mayor's office."

City Attorney Dennis Herrera swore in Mandelman as the representative for the city's gay Castro district, as well as the neighborhoods of Noe Valley, Diamond Heights, and Glen Park. Mandelman, 44, a lawyer who lost a 2010 bid for the supervisor seat, ensures there continues to be LGBT representation on the board. 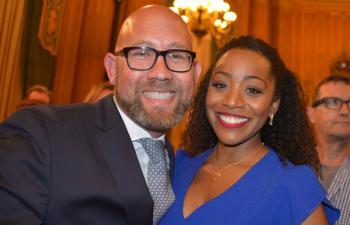 Gay District 8 Supervisor Rafael Mandelman is congratulated by Board of Supervisors President Malia Cohen after his swearing in July 11. Photo: Bill Wilson

Mandelman had Supervisors Sandra Lee Fewer and Hillary Ronen, and gay BART board member Bevan Dufty, a former District 8 supervisor, stand with him for his swearing in.

"I want to extend my thanks to the voters of this district who were willing to take a second look and taking me at my word to get beyond the petty politics that have divided our city for too long," said Mandelman, who resigned Wednesday from his seat on the city's college board.

Both Breed and Mandelman ran in special elections on the June 5 primary ballot. Breed bested gay former state lawmaker and city supervisor Mark Leno in the mayor's race. She will serve out the term of the late mayor Ed Lee, who would have left office in January 2020 but died suddenly in December, and must run in November 2019 for a full four-year mayoral term. Breed had the crowd honor Lee with a moment of silence.

Mandelman defeated District 8 Supervisor Jeff Sheehy in their contest to serve in the seat through the end of the year. He is facing token opposition in November for a full four-year term and is expected to easily win the race.

Lee had appointed Sheehy, a gay married father and longtime AIDS activist, to fill the vacancy created when gay former supervisor Scott Wiener resigned in late 2016 due to his election to the state Senate. Sheehy is the first known HIV-positive person to have served as a supervisor.

With Mandelman on the board, the progressive supervisors now have a 6-4 majority. But Breed moved last month to ensure moderate District 10 Supervisor Malia Cohen succeeded her as board president by relinquishing the gavel at the board's June 26 meeting. 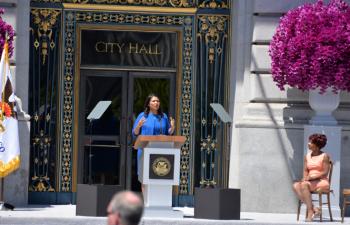 Breed stepped down as the District 5 supervisor Wednesday and will now name her replacement to the seat. Whoever is appointed will not have to run for election until the November 2019 ballot.

With competitive races this fall for the board's District 2, 4, 6, and 10 seats, control of the board could swing back to the moderates next year. A new board president will be elected in early January when the winners of the November races are sworn into office.

This weekend Breed will oversee a policy summit where the members of 12 different committees will present their ideas for how her administration can tackle a host of issues, from transportation and housing to LGBT issues and safety concerns. Several lesbian leaders, and one gay man, helped oversee the work done by Breed's Policy Transition Team.

Mandelman and Breed both have pledged to address the city's lack of affordable housing and ongoing homelessness crisis as their top concerns. The dual issues have personally impacted both leaders.

Breed, a renter in the Lower Haight, has struggled to afford to live in the city as an adult and seen many of her childhood friends be pushed out of San Francisco. She pledged to tackle the bureaucratic hurdles that have blocked developers from building housing at all income levels throughout the city.

Mandelman, a homeowner in the Mission, ended up homeless when he was 11 years old as his mother struggled with mental illness. She died during the campaign and the struggles she experienced were a constant theme of his candidacy. During high school he lived with a couple who offered him a place to stay in the city's Richmond district, and later in life, secured guardianship over his mother in order to get her the care she needed.

Acknowledging how extraordinary it is for the city to have as its mayor an African-American woman who grew up in the projects, Mandelman pledged to work with Breed.

"I am so excited to work with her to build more housing, solve homelessness, and improve the city's transit system," he said.