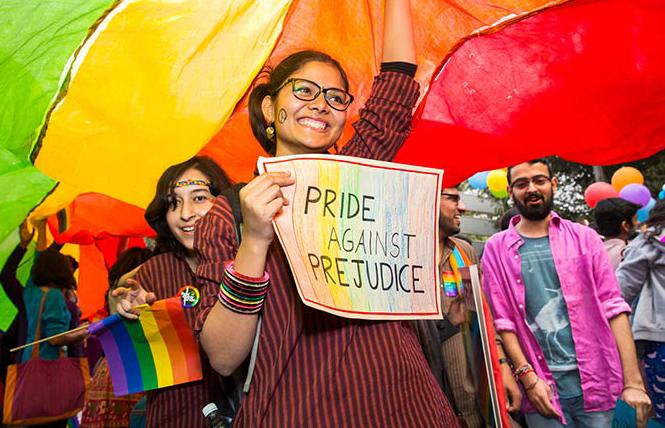 A five-judge panel headed by Chief Justice Dipak Misra took up multiple petitions requesting to overturn the anti-gay law that is a relic of the British colonial era.

Nine years ago, on July 2, 2009, the Delhi High Court struck down the law decriminalizing homosexuality throughout India.

Homosexuality is punishable by up to 10 years in jail. However, enforcement of the law is uncommon. Instead, the law is used to harass and blackmail gay people, according to activists.

Since the law's reinstatement, Parliament hasn't been able to pass a law to decriminalize homosexuality. The one attempt proposed by Member of Parliament Shashi Tharoor in 2016 was defeated.

The court's ruling - and Parliament's failure to address the discriminatory law - was a harsh blow to LGBT South Asian activists in the diaspora around the world.

"The judgment was humiliation for us, it disrespected human sexuality, and was plain unconstitutional. It destroyed people's lives," activist Akkai Padmashali, 32, told the Hindustan Times, explaining that police brutality against LGBT people increased dramatically in the aftermath of the court's action.

The Supreme Court did move to protect transgender rights at the beginning of 2014, when it granted legal rights to transgender Indians and mandated programs to aid transgender individuals to gain employment and fully participate in Indian society.

The court's hearings could end a 20-year battle to decriminalize homosexuality, or prolong it.

Anjali Gopalan, the founder of the Naz Foundation, the New Delhi-based HIV/AIDS organization that filed the first petition against Section 377 in 2001, told the Guardian that the moment "feels right."

"The momentum has built up for this moment. We have a clutch of petitions from people from all walks of life. We have celebrities giving their personal testimony. Then we have had an important ruling recently by the courts, upholding privacy. And we have seen a shift in recent years, more people coming out to take a stand. The gates have opened, as it were, and you can't close them now," Gopalan noted.

Personal testimonies are the significant way these hearings are different from the 2013 hearings, reported the newspaper.

The petitioners are diverse, ranging in ages and backgrounds from a 19-year-old student to a 47-year-old gay man, Arif Jafar, who was tortured after being arrested in 2001 under Section 377.

Jafar, who is the founder of Lucknow-based non-governmental organization Bharosa Trust and one of the most visible victims of the law, told the newspaper that LGBT Indians feared for their lives when the court reinstated Section 377 in 2013.

Jafar's story reportedly helped move the court to revisit the anti-gay law in April, according to the newspaper.

"This time, I hope the court will realize that the country is run by constitutional morality, not social or religious morality," he said.

Attorneys and petitioners arguing to overturn Section 377 told the judges that sexual orientation wasn't a matter of choice, but an intrinsic part of their identity.

Mukul Rohatgi, former Indian attorney general and a senior lawyer appearing for the lead petitioner, argued that morals and values change with the times, reported Devdiscourse.

Rohatgi is representing prominent Delhi businessman Keshav Suri, the executive director of the Lalit Suri Hospitality Group. Other petitioners include the Naz Foundation.

The "ramifications of this case are not just on sexuality," Rohatgi said, reported Bloomberg. "It will have an impact on how society looks at these people - about perception, about livelihood and jobs."

Opponents argued that India will suffer "moral degradation" if the court strikes down Section 377 again.

"It is not a normal thing," said Swamy, reported Indian news agency ANI.

Confidence
Advocates were positive, backed by pro-LGBT judgments and positions by major health organizations during the past year.

Leading up to the hearings on July 7, the Indian Psychiatry Society publicly stated homosexuality was not a psychiatric disorder.

In 2017, several key LGBT-friendly judgments were passed, including the right to privacy, which upheld sexual orientation as an essential attribute of privacy.

Suraj Sanap, a lawyer who is representing some of the petitioners, believes the path has been cleared for the court to decriminalize homosexuality, he told the Guardian.

"The Supreme Court's ruling on privacy last year was critical. It was a de facto overturning of its own earlier 2013 ruling against gay sex," said Sanap. "That means there is really no leeway for the judges to argue otherwise than for gay sex to be legalized."

The Court of Final Appeals' five-judge bench ruled in favor of a British lesbian, identified in court documents as "QT," granting her a spousal visa the same as a married heterosexual couple.

QT celebrated the ruling, telling reporters during a phone interview that she no longer feels like a "second-class citizen."

QT filed a case in 2014 after being denied a dependent visa due to marital law that defines marriage as only between a man and woman.

The policy forced same-sex binational couples married to Hong Kong citizens in countries that had marriage equality to live there on a temporary tourist visa.

QT lost her first discrimination claim in Hong Kong's Court of First Instance in 2016. However, the Court of Appeal agreed with QT that the visa policy was indirectly discriminatory. Hong Kong's top court agreed, upholding the lower court's decision.

"This judgment is a milestone for Hong Kong and a watershed moment" for gay rights across Asia," Jan Wetzel, senior legal adviser of Amnesty International, said in a statement following the ruling.

The court's ruling doesn't affect Hong Kong's current laws for same-sex couples, however, LGBT advocates throughout Asia are hopeful the law will have a positive impact on movements.

LGBT STEM professionals and students celebrated with more than 30 events across three continents.

The LGBT scientific and mathematician organization claimed the day to recognize LGBT scientists' struggles and celebrate their achievements, as well as to bring awareness to LGBT causes in the STEM fields.

Discrimination of LGBT scientists continues to remain high, according to the organization's July 2 news release.

Organization leaders pointed out that, according to three surveys conducted from 2013 to 2015 examining LGBT scientists' participation in academia and the workforce, more than 40 percent of LGBT people in STEM fields weren't out. Furthermore, one-third of out American physicists have been told to stay in the closet to continue their careers, and half of transgender/gender-nonconforming physicists were harassed in academia, according to the release.

"Solving these problems requires nothing short of a revolution in how we do science, talk about science, and how we expect science to be. We need inclusive and intersectional changes. To solve the many diverse challenges humanity is facing in the 21st century we cannot afford losing people from minority backgrounds," said Alfredo Carpineti, Ph.D., chair and founder of Pride in STEM, a British charitable trust, and one of the primary organizers of the initiative.
The international day was supported by 42 organizations.