New Castro florist has a twist 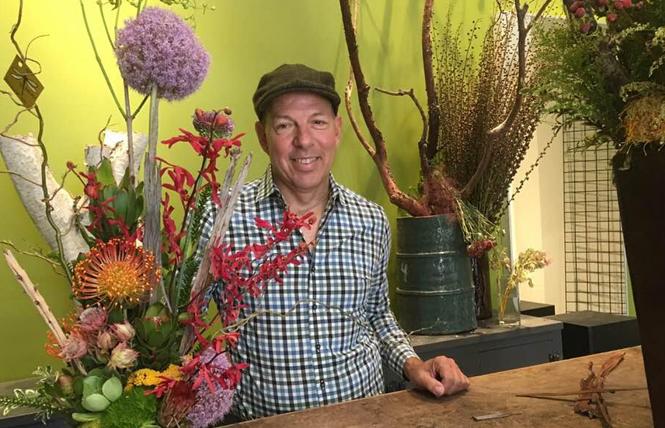 The new florist shop on Castro Street will not be selling flowers.

Cut flowers, that is.

Blumen, at 548 Castro Street, will only carry custom arrangements, owner Bruce Scarrow told the Bay Area Reporter in an interview at his new shop, where the renovation is almost complete.

Blumen replaces the comic book store, The Whatever Shop, which moved to the former location of Books, Inc. at 2275 Market Street, which closed over two years ago.

Scarrow, a 52-year-old gay man who worked at the Castro's high-end florist Ixia, 2331 Market Street, for over a decade, also plans to sell art and gifts, he said.

Open for less than a week, Sparrow has already done a number of installations downtown, a niche he hopes to maintain. People stopping in on their way home from work to get flowers will be able to pick up one of Sparrow's premade custom arrangements, beginning at $50, or have him create something, beginning at $85. Delivery throughout the Bay Area is available.

When Sparrow left his job at Ixia after the longtime owner sold the business, he decided he wanted to work for himself.

"I found this location quickly and snapped it up," he said. "I'm really excited about this."

Before he worked at Ixia, Sparrow had a number of other jobs, including as a kidney dialysis technician, but realized he had found his life's work when he began creating custom floral designs. At home, Sparrow has a Japanese garden, including succulents and bamboo.

Blumen will be open 11 a.m. to 6 p.m., Wednesday through Sunday, and by appointment on Monday and Tuesday.

Other business news
In other business news near the Castro, a new bar, Last Rites, has opened at 718 14th Street, where Resistance used to be. According to the website Eater, the new owners describe the bar as "Polynesian noir." The back of the bar is made from an actual airplane fuselage and bar stools from airplane seats.

The Castro and adjacent Duboce Triangle still have plenty of empty storefronts, including a handful of vacancies in properties owned by Les Natali, who recently opened Hamburger Mary's at 531 Castro Street. Most recently, the year-old pop-up furniture store owned by decorator Stewart Morton at 4144 18th Street has closed. Natali is also looking for tenants at two other storefronts on the block, including at the now-closed Mexican grill Zapata, where a large sign out front announces reduced rent.