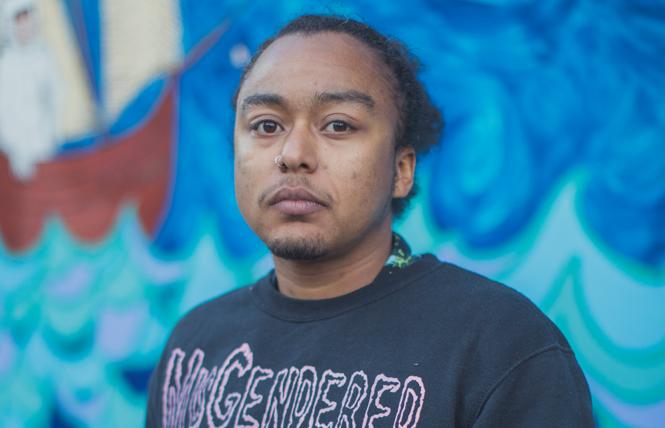 Mason J. Olaya-Smith went from sleeping in the San Francisco Public Library to being the first fellow at the James C. Hormel LGBTQIA Center on the third floor. In the past, Olaya-Smith, who identifies as a trans, intersex, and genderqueer person, struggled to secure employment and housing because of their identity, but now things are stabilizing.

For about 12 hours a week, Olaya-Smith comes to the center to do outreach on social media and explore the ins and outs of the material at one of the country's premiere archives for the LGBTQ community.

"My job is to act as a welcoming committee for the Hormel Center," said the 30-year-old, who uses gender-neutral pronouns.

Olaya-Smith brings a fresh perspective to the fellowship and can directly relate to the communities that the Hormel Center is trying to target. Though Olaya-Smith wants to highlight the extensive and rare works that are held at the center to all populations, they are passionate about recruiting younger LGBTs who may not know the center exists and emphasizing texts and works with which underrepresented communities can more closely connect.

"I want to allow people who don't see themselves reflected in the LGBTQ media or programming to feel especially welcome," Olaya-Smith, who started the two-year fellowship in November 2017, said.

This was particularly important to Olaya-Smith because they said that they themselves often felt ostracized in many communities and places because of their identity. They said they want the Hormel Center to be a "cultural center" where people can share ideas, learn about their history, and become inspired.

As part of the fellowship, Olaya-Smith sends out social media posts, something they called a "queer smorgasbord" of information, on the center's main channels. They also created the center's first Tumblr account, which now has over 100 followers. "Woman crush Wednesday" posts that highlight interesting women from LGBT history or today and "Trans crush Tuesday" posts celebrating trans people are just a few of the fun and informative things Olaya-Smith has come up with. And the approach seems to be working.

"The fact that generations that don't typically think of the library as a space for them are now showing up is amazing," Olaya-Smith said, who added that they have seen an uptick of trans women of color and youth as young as 9 years old visiting the center.

This has been helped in part by the popular Radar Reading Series "Show Us Your Spine," which Olaya-Smith works on. The program invites a handful of writers to explore the archives of the center for a month at a time and then read from work that inspires them at a public event. Olaya-Smith works one-on-one with the writers to help them navigate the over 14,000 titles at the center.

The wave of newcomers coming to the center is something Marie Ciepiela, a queer woman who's executive director of the Friends of the Public Library, has noticed too. The Friends of the SFPL is a nonprofit that funds the center through an endowment, including the new fellowship program.

Ciepiela said that in a short time the center's programming and brand have been revived with the help of Olaya-Smith; newly appointed Hormel Center program manager Wendy Kramer, a lesbian; and Lane Goldszer, the center's librarian.

Ciepiela was a voice behind originating the fellowship program because she recognized the need to engage younger LGBTs with the center. The center didn't need another archivist, or librarian, Ciepiela said, but someone who had deep roots in the community and could bring people in. After eight months on the job, Ciepiela knows Olaya-Smith was the perfect person to do just that.

"Mason is just incredible," Ciepiela said. "They have engaged with community issues throughout their life and have cared for people who need it the most. They brought their heart and smart advocate brain to the job."

Kramer is Olaya-Smith's direct supervisor and couldn't be happier to have them on board.

"Mason is connecting users all over the Bay Area and the world with Hormel Center collections," Kramer said. "[They] are an ambassador, helping the Hormel Center form relationships that I hope will spread and be long term."

Olaya-Smith has come full circle from experiencing hard times to now helping others who are not in the best place through their fellowship at the center. Olaya-Smith lives in Oakland and, in addition to the fellowship, works at an in-home care company in San Francisco that specializes in caring for people with autism. Aiding for people with autism has been a longtime passion of Olaya-Smith, who has four autistic younger siblings.

"I'm not an archivist. I'm not a librarian. I'm an activist," they said.