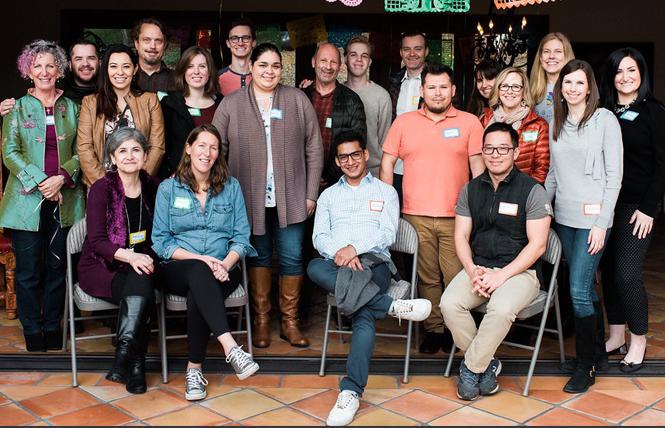 Ten years ago, Jessy D'Santos made the decision to come to a place where she could be herself, a transgender woman. She fled Mexico City, where she faced daily persecution for then being a gay man. With one reference to visit Oasis Legal Services in Oakland, her life changed forever.

Today, D'Santos is a United States citizen and a proud transgender woman living openly and freely in San Francisco.

"It was impossible for me to be a trans woman in Mexico," D'Santos, 42, said. "It was something I really wanted, but I was afraid to do."

She crossed the U.S.-Mexico border in 2000, landing in San Francisco. She lived in the United States for eight years, everyday fearing she would be discovered and deported back to a country that has one of the highest rates of murder of trans people in the world.

That day came. D'Santos was visiting relatives in Los Angeles in 2008 when her ex-boyfriend's family called police, people she said were homophobic. She went to jail for a few days before being moved to what she called an ICE (Immigration and Customs Enforcement) cube: a freezing, small room where she was held in solitary confinement due to her gender identity and the increased chance of violence against her by other detainees.

"I had a really hard time in that place," she said.

After two weeks there, she was deported back to Mexico City.

She decided to take the chance and travel back to the U.S. only two months later in a friend's car.

It was then she had the courage to transition. During this time, a friend referred her to Oasis Legal Services, a nonprofit that provides legal services to low-income LGBTs seeking asylum in the U.S.

"Everything changed for me then," she said. "This meant I wouldn't have to live in the shadows any longer. I could go to school. It opened my world."

Today, D'Santos has two associate degrees from Canada College in Redwood City, in interior design and art, and is a board member at Oasis Legal Services. She also is a program director at San Francisco's El/La Para TransLatinas, an organization offering resources for trans Latina women.

This was all made possible by Oasis Legal Services, D'Santos said. The Oakland-based nonprofit was founded by four women in May 2017. It has helped over 700 LGBT immigrants obtain asylum in the United States with a 99 percent success rate.

"We are allowing xenophobia, homophobia, and Islamophobia to prevent us from fulfilling our legal and moral obligation to provide a safe haven to persecuted members of the international LGBTQ community," said Lijphart, who also added that seven of the eight countries that have been targeted under the ban explicitly criminalize same-sex relations. Some even have the death penalty for being gender nonconforming.

Lijphart said her career has undergone quite a change since Trump has taken office.

"It feels like everything is under attack from the [Trump] administration, starting with the trans ban," she said, referring to the Trump administration's plan to implement a transgender military ban, first announced a year ago. "It's been nonstop assault on refugees and immigrants. It's broader than just asylum seekers."

Trump's zero tolerance policy at the U.S.-Mexico border has resulted in thousands of children being separated from their parents, and has also hit the LGBT community particularly hard, Lijphart said.

"LGBTQ parents who are separated from their children are likely to have even more difficulties in reclaiming their children, given the mountain of proof the government is requiring and the fact that most countries aren't good about issuing documents for, or even recognizing, non-heterosexual parent couples."

Detention for LGBT immigrants in general is especially harmful, Lijphart said, citing the fact that LGBT immigrants who are detained are 15 times more likely to be sexually assaulted while in detention than other immigrants. And for transgender women, that figure is even higher. They are likely to face violence from guards, placed in men's detention facilities, or solitary confinement.

Every day, Lijphart and her peers listen to horrific stories of LGBT people's struggles in their home countries, from not being accepted by their family to being raped by police to not having any protection from their governments to facing the threat of death.

"If I had a dollar for every time someone's father has said they would rather have a dead son than a gay son," she said. "The emotional damage that does and the constant abuse takes a toll on someone."

Almost 99 percent of her clients tell their stories for the first time when they sit down with Lijphart. She works one-on-one with them for months to get them an interview with the asylum office, which today, due to new policies, she said takes about three months in San Francisco. Before, Lijphart said it took almost two and a half years.

But when that day finally comes, when her clients are awarded asylum, it's a beautiful moment.

"It's thrilling," she said. "We know the difference it makes in someone's life when someone gets a positive decision. It's really moving, very moving to be there." 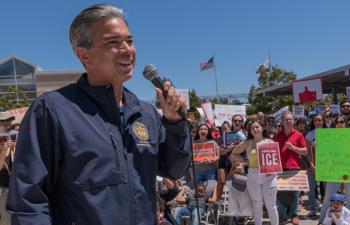 Assemblyman Rob Bonta (D-Oakland) spoke at a protest June 20 at the West County Detention Facility in Richmond, which has a contract with Immigration and Customs Enforcement. Photo: Jane Philomen Cleland

This day is becoming increasingly harder for the 10,000 LGBT immigrants seeking asylum in the U.S. today. Currently, Oasis Legal Services has about 600 clients it's working to achieve asylum for, none of which are turned away for an inability to pay. Most clients are from Mexico, Brazil, and Central America.

Last weekend, tens of thousands of people protested in the Bay Area and beyond, criticizing Trump's immigration policies such as childhood separations. While Trump issued an executive order halting the process, there are thousands of children scattered about the country who have yet to be reunited with their parents.

Attorney General Jeff Sessions recently decided that asylum seekers who are fleeing domestic violence or gang violence in their home countries are no longer eligible for asylum, a decision Lijphart called "dangerous." Domestic violence is something that strongly affects the LGBT international community, she said.

Despite the struggles they are facing, the people at Oasis Legal Services persist. Recently, Horizons Foundation established the Asylee, Immigrant, and Refugee Emergency Action Fund (AIREAF), which will distribute contributions to nine Bay Area organizations that are fighting for the human rights of immigrants, refugees, and asylees, including Oasis Legal Services. At Oasis the money will be used to bring awareness to the services the agency offers and provide legal representation at the asylum hearings of its clients, among other things.

"Funding like this is so important because there is a huge demand for our services that we strive to meet," Lijphart said.