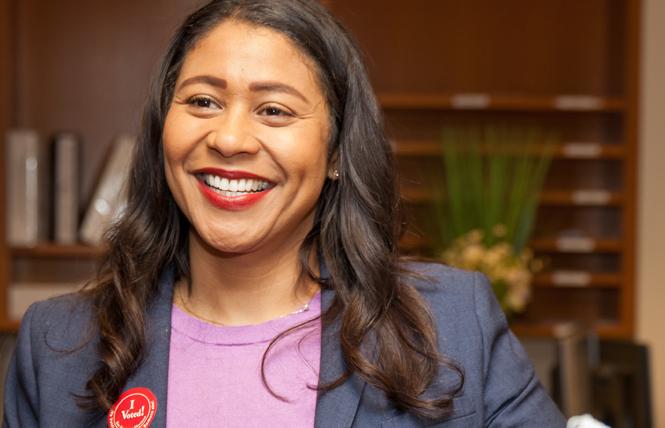 Mayor-elect London Breed has chosen several lesbian leaders, and one gay man, to lead a panel tasked with formulating ideas her administration can implement to address a host of issues vexing the city.

Leading the Policy Transition Team as its director will be Joyce Newstat, who served as finance chair of Breed's mayoral campaign. She and her wife, Susan Lowenberg, were prominent backers of seeing Breed move into Room 200 at City Hall.

Newstat, the founder and CEO of Rocket Science Associates, was former Mayor Gavin Newsom's director of public policy. In 2012, she served as the director of former Attorney General Kamala Harris' transition team. Newsom, the state's lieutenant governor, is favored to win this fall's gubernatorial race, while Harris is now the state's junior U.S. senator.

Former supervisor Roberta Achtenberg, who unsuccessfully vied in 1995 to be the city's first LGBT mayor, will serve as one of four chairs of Breed's policy panel. Vice chair of the board of directors of the Bank of San Francisco, Achtenberg served as an assistant secretary for fair housing in the Clinton administration and was an Obama appointee on the U.S. Commission on Civil Rights. She also served as a trustee overseeing the California State University system.

There will be a dozen committees focused on different policy arenas, with LGBT people serving on each, according to Breed's transition team. One focused on health issues will include HIV and AIDS policies, while an equity and equality committee will cover LGBT concerns.

The panel is scheduled to present its report to Breed at a policy summit to be held Saturday, July 14. While it will be open to the media, it is not expected to be open to the public, though it likely will be livestreamed via social media.

"I believe great ideas come from the people of San Francisco who have had different life experiences and perspectives," stated Breed. "I am looking forward to working with the Policy Transition Team to discuss best practices and innovative ideas as we work together to move San Francisco forward."

Breed will take her oath of office as the city's 45th mayor on the Polk Street steps of City Hall Wednesday, July 11. Her inauguration will run from 11 a.m. to noon.
She is the city's first African-American woman elected mayor, and only the second woman to hold the position. Last month, Breed announced she had hired as her chief of staff Sean Elsbernd; the former supervisor currently works for former San Francisco mayor and current U.S. Senator Dianne Feinstein (D-California) and will join the mayor's office later this year.

Having won the special election in the June 5 primary following the unexpected death in December of the late mayor Ed Lee, Breed will serve out the remainder of Lee's term through January 2020. She will need to run for a full four-year term on the November 2019 ballot.

Baker memoir finds a publisher
An independent publishing house will release the memoir of Gilbert Baker, titled "Rainbow Warrior," in June 2019. It is being timed to the 50th anniversary of the Stonewall riots, the uprising at a New York City gay bar considered to be the birth of the modern LGBT rights movement.

Baker, who turned the rainbow flag into a global symbol for LGBT rights, died last year at the age of 65. This week his estate announced that Chicago Review Press had bought the rights to publish Baker's autobiography for an undisclosed amount.

According to the announcement, the memoir will track Baker's childhood in Kansas and later move to San Francisco in the 1970s, where he became an artist and vocal LGBT rights and AIDS activist.

He was long known as the creator of the rainbow flag, which debuted at San Francisco Pride 40 years ago. But earlier this year his friend and former roommate Lynn Segerblom came forward to claim the first rainbow flags were collaboratively designed and made by herself, Baker and their friend James McNamara, who died of AIDS in 1999.